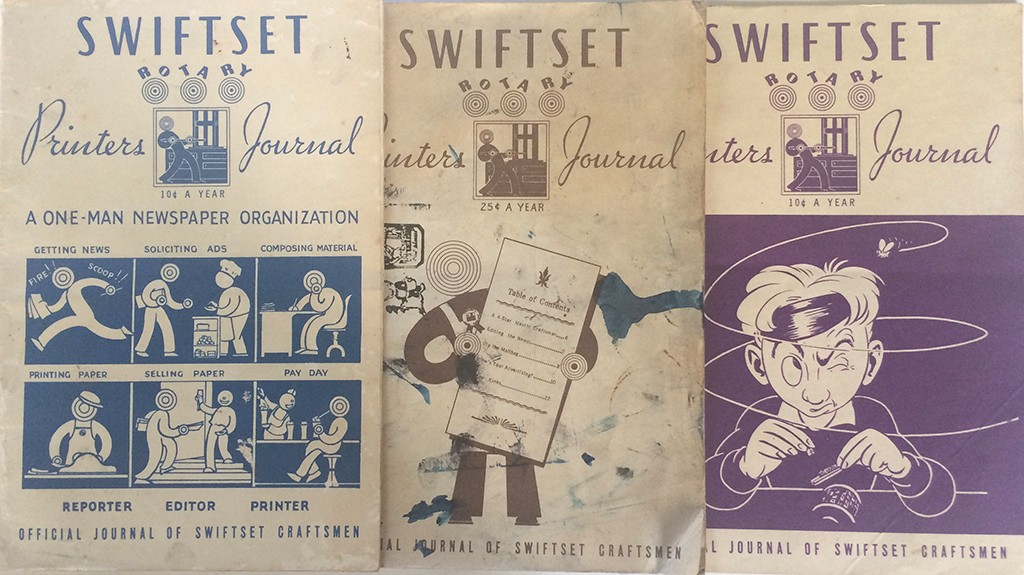 In the mid-twentieth century, manufacturers of tabletop printing presses for hobbyists, such as Kelsey in America and Adana in Great Britain, published substantive newsletters to educate and upsell their fledging printer/customers. Kelsey’s The Printer’s Helper ran for a remarkable 55 years from 1929 to 1984 while Adana’s Printcraft ran for a respectable eight years from 1948 to 1956. On par with these titles is the lesser known Swiftset Rotary Printers’ Journal, the official publication for Swiftset Rotary Presses, which ran from 1939 through 1950.1

Before discussing the Swiftset Journal, it should be noted that Kelsey and Adana, as well as Sigwalt and Golding2 presses, use the same materials as professional letterpress production presses: type, spacing, furniture, ink, etc., whereas Swiftset Rotary Presses, made between the late-1920s and the mid-1960s, were actually children’s toys, albeit designed for serious play.3 Principally comprised of tin, these presses sold by the Superior Type Company (later Superior Marking Equipment) of Chicago, were printing kits supplied with rubber type, water-soluble ink, and pre-cut paper—everything to print a tiny newspaper for fun and profit. To operate a Swiftset press, a line of rubber type is set in a metal channel, then multiple channels are mounted on the cylinder. The channels are held in place by rubber tires at each end of the cylinder. Via the hand crank, the cylinder turns in place against an ink roller. Paper is fed under the cylinder, then gripped by the rubber tires and pulled through the press. Therefore the paper width must match the cylinder, though can be trimmed after printing. Three models were produced: the Cub prints sheets 3½ × 5½ inches, the Star prints sheets 3½ × 7 inches, and the Ace prints sheets 5½ × 7½ inches.

The Cub, the smallest Swiftset press with rubber type inserted into the slots on the cylinder. (George Chapman)

Published six times a year, the Swiftset Journal was a 16-page, 5½ × 8¼ inch pamphlet with an initial subscription price of .10¢ (increased to .25¢ within the first year, but not thereafter). It featured concise articles on maintaining reader interest, obtaining advertising, color printing, and what printers need to know about type. The inside back page of some issues was dedicated to accessories including type, which initially only show one-word specimens with order numbers, but no identifying names. Superior later expanded their product line to include popular faces of the day: News Gothic, Century, Cheltenham, Goudy, Romany, Lydian, Tower, Balloon, and Wedding Text. 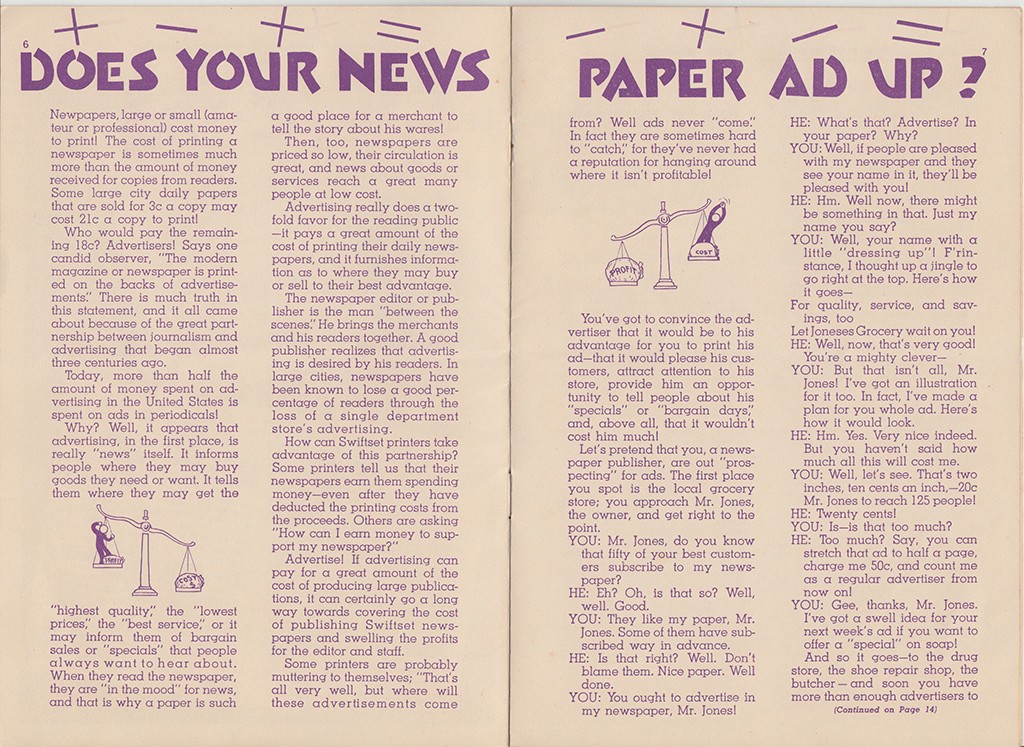 The disconnect production-wise was that pages were not composed from Swiftset types. The main body text was set in double columns of Stymie with a variety of display types, not among those for sale by Superior. The format was largely unchanged except for a late change to the nameplate. Some content was recycled. Issues were printed in a single color, for example blue, brown, purple, etc., then eventually just black. In about 1951 the Swiftset Rotary Printers’ Journal was replaced by The Idea Book and Printers’ Journal, printed in blue. Apparently, it was a periodical in name only as much of the content was recycled from the earlier publication and there seems to have been only one undated edition. Of course, it would not have been feasible to print each issue on a Swiftset press, neither was this the case for The Printer’s Helper nor Printcraft. 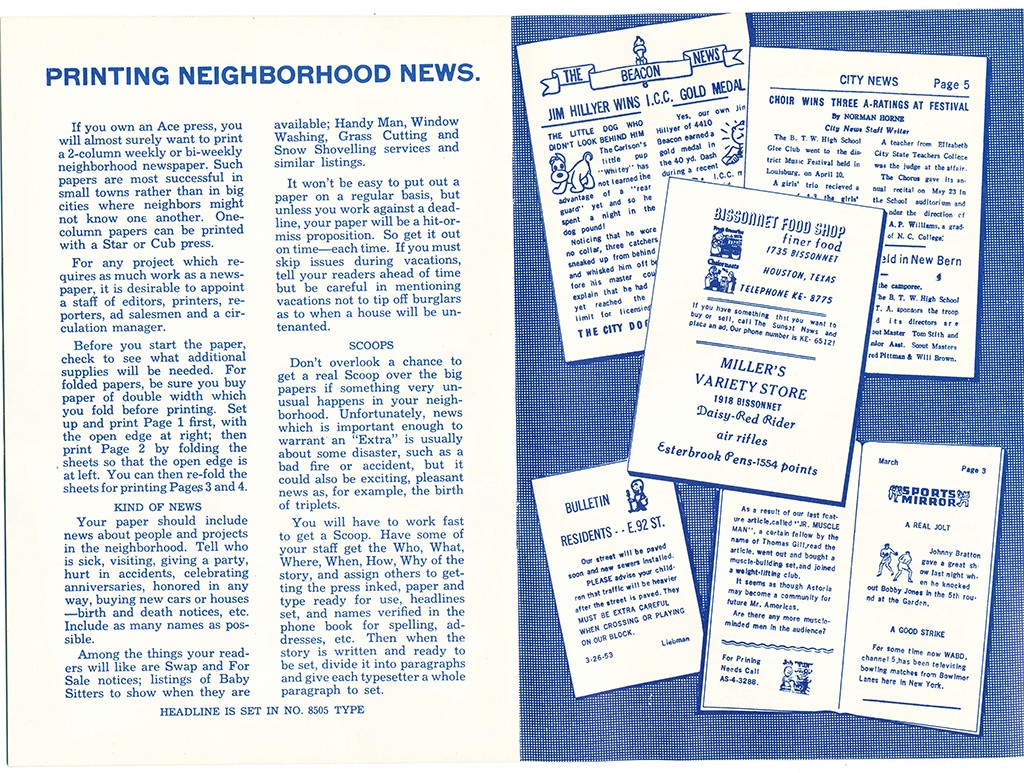 As noted by letterpress printer and collector, John Horn, some professional printers got their start on Swiftsets before upgrading to cast iron presses like those made by Kelsey and Chandler & Price and then on to serious production presses like Kluge, Heidelberg, and Miehle.4 Perhaps they were encouraged by guidance within the pages of the Swiftset journals. Readers who have samples of printing done on a Swiftset press are encouraged to contact the APHA website editor.