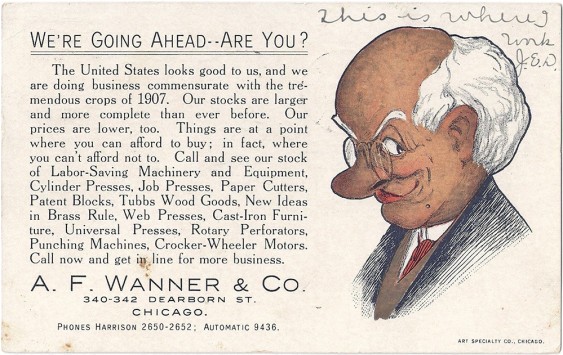 Andrew Franklin Wanner (1855–1935) was a central figure on Chicago’s printers row. Letterpress printers might know his company as the original maker of Poco and Potter proof presses. It was also one of the earliest selling agents for Vandercook, the most sought after brand of proof press today.

One contemporary tribute to Mr. Wanner stated that he had furnished some of the type used by the ChicagoTribune to resume printing after the Great Fire. His business acumen led to his partnership in Mechanics Type Foundry (1872–1883). After its dissolution, Wanner and another partner formed Union Type Foundry (1883–1892). Upon its consolidation into American Type Founders, he returned to the supply business he had established several years prior.

Several well-known names in printing from this era were at one time employed by Wanner including A.T.H. Brower (press maker, first ATF board secretary), Thomas W. Suddard (inventor, plant manager at Hamilton Wood Type Co.) and Wallace S. Warnock (patent printing plate base). In 1911, Wanner sold his company to another employee named H.W. Hacker, who later renamed it after himself. Hacker was a proponent of greater accuracy in printing methods and materials—and coined the term “premakeready.” He developed a line of precision test presses and the first photoengraving plate gauge, which Graphic Arts Monthly later called “the first thing to penetrate the fog of makeready.” In 1931, Challenge Machinery Corp. acquired the Poco and Potter line from Hacker. In 1937, Hacker Mfg. itself was acquired by Vandercook & Sons.

Turnaround Time in a 17th-century Printing House? by Paul Moxon, Website Editor. “Occasionally, I field questions from site visitors about various aspects of printing history. I generally reply by email sharing what I can on the subject…”