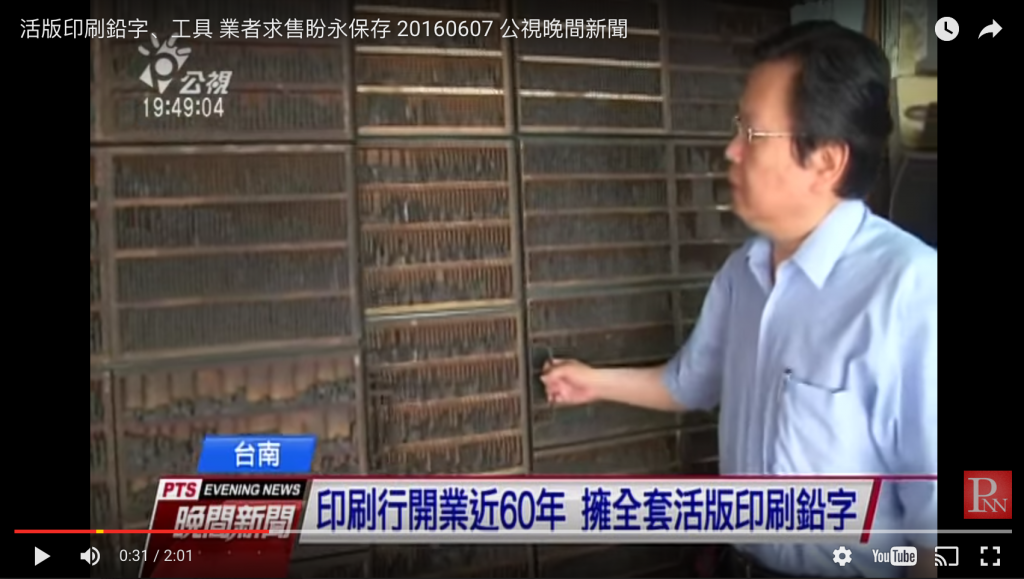 Screen capture of television news report. Link and translation in post below.

Recent Taiwanese media stories about a letterpress shop for sale on the island have helped preserve an estimated 80,000 traditional Chinese letterpress lead type characters from possible destruction. These particular types are rare due not only to the transition to modern printing technologies but have been since the adoption of simplified Chinese characters1 following the Communist victory in mainland China.

A news site article on this printshop claims that this collection of types contains the only surviving traditional full fonts made by the Zhongnan type foundry dating to the pre-World War II Japanese rule of Taiwan.2

A television news report was spotted by a visitor in Taiwan, a self-described hands-on machine guy, who after seeing it thought these types were too good to be melted down or recycled. And while not a printer or collector, he contacted the APHA website and offered this outline of the video:

00:00-00:12 anchor’s introduction: A printshop in the historical city of Tainan dating back to 1958 kept full sets of letterpress types even as computerized printing overtook the industry long ago, and the owner hopes to find a permanent home for them.

00:00-00:20 the owner shows various business cards printed by him over the years.

00:36-00:40 narrator states that the hand press is one of the earliest types used in Taiwan, preserved in full working condition.

00:40-00:53 owner estimates that there are roughly 80,000 to 100,000 type characters. He states that other types owned by his peers have long disappeared with their businesses.

01:05-01:36 narrator describes the shift and downfall of the trade. Owner expresses his regret and concern to the loss of the last full sets of traditional Chinese character types in the entire R.O.C., Taiwan.

01:36-02:01 Narrator describes how the owner once received an offer to buy out and melt all the type into fishing weights, but he refused to let them be destroyed. The owner contacted several museums and institutions, but none of them had the funds the to buy his entire collection, and that he hopes to find a good place for all of them.

The observer subsequently reports that the print shop owner told him that a single collector had bought almost all of it. He credits the Dragon Boat Festival holiday as the likely reason interested buyers came to visit him, but did not identify the buyer other than that he/she was Asian.