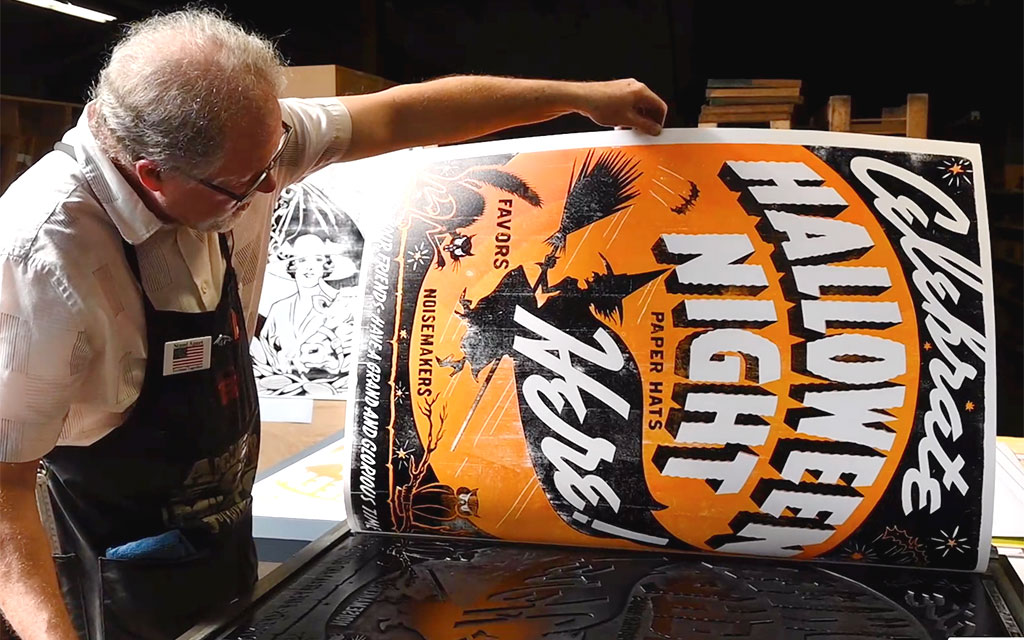 Thur., Nov. 5 | During this 45-minute demonstration, Jim Moran, the Master Printer at the Hamilton Wood Type & Printing Museum, printed the second color on a 26″ × 40″ advertising poster using a 41″ × 60″ proofing press. The blocks for this two-color Halloween poster, featuring lettering and a witch riding a broom, promoted paper hats, favors, and noisemakers are part of the museum’s Enquirer Collection. The first color, orange, had already been printed from the first block, and Jim’s demonstration focused on how to set up and print the second block. Copies of the completed poster will be available to purchase in the museum’s store.

Printing from large antique woodblocks presents several technical difficulties. Jim began the demo by setting up to print the second color from the second block. He noted that some blocks have reference prints glued to their backs providing information about color and registration. Jim mentioned that he often oils blocks to bring suppleness back into the wood. When rubbing oil into the blocks, he is careful to rub in the direction of the grain. Jim also examines blocks to see if they are warped, either in terms of crown or core, which may be compensated with makeready. He also looks for cracks and may glue and clamp the block—being careful to apply pressure to both ends. When inking blocks by hand and pulling prints, Jim is on alert for small pieces of wood that may detach from the main block.

There were no registration marks on the second block, so Jim set the block in the press bed in what seemed like a reasonable position. He locked it up by following the usual procedure of surrounding the block with furniture and quoins, planing, and locking up. Jim inked the block by hand with a brayer. He noted that when blocks have not been printed for a number of months or years, they are thirsty for ink at the beginning of a press run. After inking, Jim then pulled a proof to gather information about the block’s position relative to the first press run and how the block was printing. The labor-intensive method of inking by hand allowed Jim to have a great deal of control over how the block was printing. That seemed especially crucial given the block’s age and size.

Watching a master printer set up allowed audience members to recognize subtleties of movement in inking, paper handling, and press operation. Jim also shared the tip that he does set up for this type of press run using paper he had fed through the press at the end of the first press to pull ink off the block; this served the dual purposes of beginning clean up and generating several proofs to set up subsequent press runs.

After working through some additional proofs, demonstrating the typical process of iterative adjustments familiar to all letterpress printers, Jim was satisfied with the set up for the second press run. He then showed other examples of blocks and multi-color prints from the museum, including a recently completed tiger and a racehorse for which he shared process proofs. All of the posters Jim Moran shared were examples of the pre-1950 American advertising genre in which letterpress printing from woodblocks created compelling images. This presentation was a wonderful window into the rich resources of the museum’s collections and facilities, and it was a joy to see one of our Awayzgoose hosts print a seasonally appropriate poster.

Panel Discussion—Jim Hamilton, Rob Saunders, Jim Moran, Sandro Berra, Mark Barbour: The Future of the Printing Museum by George Barnum. “Sat., Nov. 7 | This distinguished panel discussed the wide variety of approaches to preserving the history and craft of printing. Each panelist gave an…”