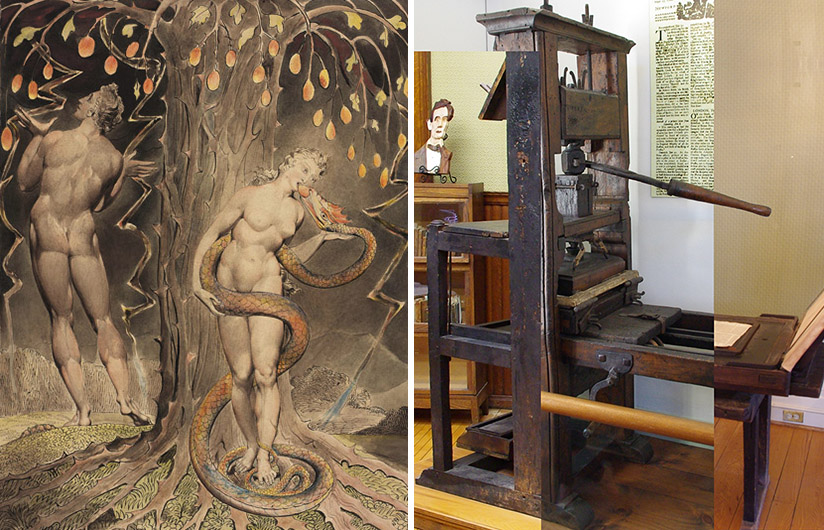 L: Blake’s “The Temptation and Fall of Eve,” 1808. One of the illustrations in Milton’s “Paradise Lost,” The Butts Set. (William Blake Archive). R: A composite of three common presses from the early, middle, and late eighteenth century. (Seth Gottlieb)

Moderated by Sara Sauers, APHA’s Vice President for Programs, this is the first APHA conference to feature undergraduate paper presentations.

Emma Studebaker considered the way in which information about publication details can inform the interpretation of books. She then extended this idea and applied it to the interpretation of works of art. From the early sixteenth- to the late nineteenth-centuries, false imprints were used to provide misleading information about time and place of publication as well as to mask the identity of workers. Though they contain information that is not factual, false imprints still serve to inform the way in which a reader understands a book and its contents. Though false, imprints convey authority. This falsification, or borrowing, of information and the impact that the presentation of information has on the reader or viewer’s experience of the book or piece of art can be understood in relationship to historical contexts. Changes of date, place, and means of production may alter the way in which a work is read. In contemporary times, an understanding of false imprints can inform contemporary critical reading practices across a variety of media.

Seth Gottlieb and Veronica Hebbard’s, joint presentation outlined their student team’s work with the Cary Collection to design and build a common press. This project was defined by the students as a press made primarily of wood prior to 1800 which required two pulls to print a form. The students have chosen to build a historically accurate reconstruction of a press from the period 1770 to 1790. The team has explored the concept of vernacular engineering, which is the way in which a design evolves and changes over time in response to trial and error. This is a qualitative process based on experience in the field. The team has been conducting in-depth observation of existing eighteenth-century presses and analyzing the technical details of changes related to their structure and function. During the eighteenth-century, the common press evolved quite a bit. The students are working towards publishing a paper that describes their findings and includes plans for the reconstruction common press they plan to build. The combination of engineering and historical perspectives the RIT students are using in their work has the potential to make significant contributions to the field of printing history.

Kalie McGuirl examined literary references to printing in the writings of William Blake and John Milton. Her analysis highlighted the importance of printing to literary figures of the past and the relationship authors had with printers, publishers, and censors. In particular, Kalie highlighted Milton’s Areopagitica, which was published in England without a license in 1644. This text argued for the freedom of the press and suspension of restrictive licensing practices. A seminal text in print culture, Milton’s essay claims that the freedom of the press is an essential feature of culture and makes the case for the dissemination of knowledge through print. Due to the way in which it was printed, the text drew upon, and contributed to, the tradition of willful transgression in printing. Surrounded by the hyperbole of heaven and hell, printing was a contested act that had high stakes for literary figures of the past.