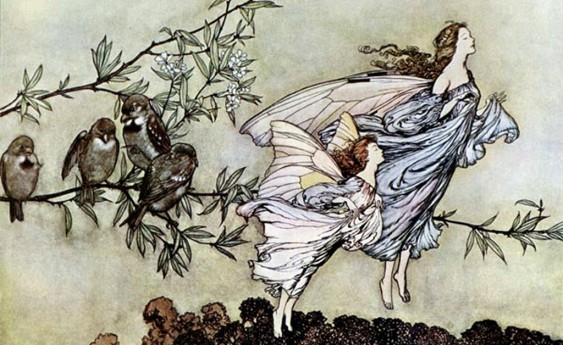 Detail of an illustration by Arthur Rackham for Peter Pan in Kensington Gardens (Hodder & Stoughton, 1906), reproduced for the book by the Hentschel Colourtype Process.

Matthew McLennan Young began his talk by discussing Jacob Christoph Le Blon’s Coloritto, or, The Harmony of Colouring in Painting (1725). Le Blon invented tricolor printing in the primary colors (blue, red, yellow), occasionally adding black or another color to improve the result. In order to break down the colors into primary components much trial and error was required. Because Le Blon was self-taught, he looked at the printing “accidents” to help guide and refine his methods.

In the final two decades of the nineteenth century, color printing was dramatically improved. First, Frederic Ives developed and refined the half-tone screen, making relief half-tones commercially viable. At about the same time, Sir William Wiveleslie Abney, an English photographer and scientist, began measuring color, and the hues and luminosity of ink pigments. He conducted a number of experiments with tone through progressive proofs and Young showed us some late nineteenth century examples. In 1893, Raithby Lawrence & Co. introduced photochromotypy that was used in trade publications in the following years because it allowed “absolute” reproductions. Three years later, C.G. Zander’s Photo-trichromatic Printing in Theory and Practice (also published by Raithby Lawrence), discussed techniques and process in color printing, as well as the selection and production of ink—ink being the biggest obstacle to true color at the time. Smooth, wove paper was another requirement for successful process printing and Young showed us examples of early three-color reproductions in art magazines and books that look as beautiful today as the day they were printed, including a number of examples from the Carl Hentschel Company. Howard Pyle, Maxfield Parrish, Jessie Willcox Smith, Beatrix Potter, and Arthur Rackham were just a handful of artists whose work was printed using the 3-color process.

Zander developed a four-color process that included green, which wasn’t quite as successful and some modifications had to be made. The demise of 3-color printing began in 1910 when process engravers, such as A.C. Austin of  New York, strongly advocated for black to be added as the fourth color.