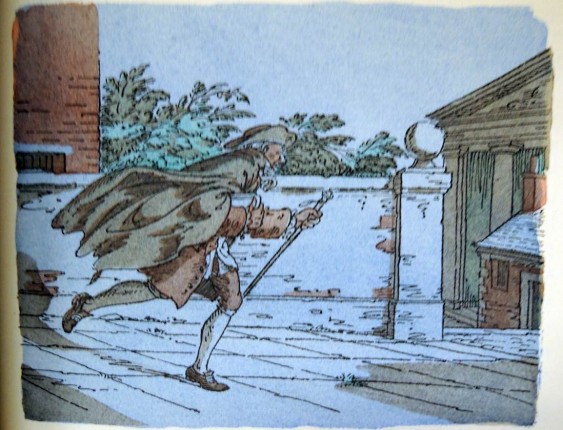 Julie Mellby, Graphic Arts Curator at Princeton University, spoke on “Adding Color: The Business of the Stenciller in Twentieth-Century Publishing.” Many scholars do not treat stencil as a printing art and yet pochoir (its French name) was closely involved with producing high quality color for the printing industry. Mellby’s talk underscored the importance of this neglected process. Best known for fine art reproduction, stencil was also used in quality magazine reproduction and for better book work. There was even a brief period in the 1920s when stencillers colored film before the advent of Technicolor. The process involves (as T.M. Cleland remarked) “an insane amount of work” both on the design side for determining colors and their overlap and on the production side for cutting the stencils and applying the colors by hand. Stencil work influenced the appearance of book design in the early and mid-twentieth century, notably that of W.A. Dwiggins, who would employ stencil in illustrations even when the final book might be printed offset or letterpress.

Mellby took us on a whirlwind tour of some important book stenciling studios. Charlize Brakely, a commercial artist in New York, supported herself coloring plates for limited edition fine press publications. The Limited Edition Club’s The History of the Life of the Late Mr. Jonathan Wild the Great (1943) proved quite complex. T.M. Cleland designed it with such intricate stencils and so much overlap of colors that Brakely tripled her price for the book. The LEC’s publisher George Macy protested the price increase but paid the bill. The LEC also worked with the Martha Berrien Studio in New York. Berrien colored the LEC’s Twenty Leagues beneath the Sea (1956) and Moll Flanders (1954). She was the preferred studio for facsimile work done for figures such as bibliophile Philip Hofer, or for Princeton University and the Morgan.

Perhaps the most important book facsimile work was done by Arnold Fawcus in Paris. Fawcus had been printing pochoir editions of artists such as Cezanne when he was approached about making a facsimile of a unique surviving copy of William Blake’s visionary poem Jerusalem. The resulting reproduction, produced by pochoir and collotype, so impressed discerning collectors that Fawcus’s Trianon Press inaugurated its series of renowned facsimiles of Blake’s poems which he had illustrated himself in color using his unique “illuminated printing” technique, a relief etching process. Some deluxe editions of the Trianon Blake facsimiles include progressive prints with the original stencils, which provide useful information about the production process. In concluding, Mellby pointed to the need for more scholarship on stencil topics including the workers and working conditions, production, economics, and specific works. This reporter wholeheartedly agrees and would add that it sounds like more work should be done by printing historians on stenciled magazine and book work.

Laura Wasowicz on the McLoughlin Brothers: Innovators of the 19th Century Picture Book by James P. Ascher. “Building on continued research into the history of children’s books and illustration, as well as her recent blog post, Laura Wasowicz presented her paper “McLoughlin…”

Nick Sherman on William Page’s Magnum Opus of Multi-Color Typeface Design by Jane Rodgers Siegel. “Everyone loves the Page chromatic type specimen (1874), but it seems that no one loves it more than Nick Sherman, a digital type guy by…”