Angela Campbell, Assistant Conservator at the Metropolitan Museum of Art, spoke about the paper production story behind Dürer’s Meisterstiche (“master engravings”) which include: Knight, Death, and the Devil; Melencolia I; and St. Jerome in His Study. Durer’s Meisterstiche represented an unusual opportunity for study because of past scholarship on the three works and because the Metropolitan Museum holds six impressions of Knight, Death, and the Devil, as well as four impressions of Melencolia I and four impressions of St. Jerome in His Study, each with slight inconsistencies. Art historian Joseph Meder’s chronology of Dürer’s impressions divided Melencolia into two states, the first state in which the number “9” appeared backwards in the background and the second in which it is printed correctly. In addition, many of the surviving Meisterstiche impressions had a distinguishing horizontal crease on their versos, which she thought which might be part of the history of the production of the prints.

Using a specially modified digital camera, Campbell began examining scratches and wear which printed (or failed to print) in the finished impressions of Melencolia. From this analysis she developed a detailed timeline for fitting the extant copies, both at the Met and at other collections. In addition, Campbell also enlisted the aid of master engraver Andrew Rafferty at the Rhode Island School of Design, to test her theories on the engraving plate. Rafferty engraved a to-scale copy of Dürer’s St. Paul, which they then used to carefully print impressions onto comparable modern paper (Ruscombe Mills Queen Anne Laid Linen). The prints were examined throughout the edition print run for wear and scratches.

Based on her examination of extant copies and her experience working with Rafferty, Campbell argued that Dürer specifically ordered large sheets of paper with no watermarks (which might interfere with viewing the print). Campbell also reported that, by using special software and working with C. Richard Johnson, at Cornell University, to measure chain lines, she found that Dürer appears to have used two types of paper with different chain lines, which she called paper type A and B. Research here is still preliminary but quite exciting. Her conclusion: Dürer used large, specially-ordered sheets of paper for his Meisterstiche impressions, the sheets were folded prior to transport, and the 500-year-old impressions we see today provide insight into the artist’s working methods and very specific choice of materials. 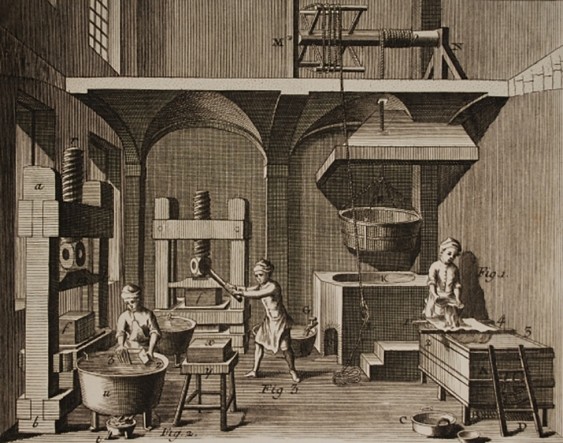 “Sizing paper,” from Diderot’s Encyclopedia. Gelatin sizing was a key step in the European handpapermaking process and has been found in most historical papers. But printers preferred unsized paper. So who put the gelatin in the paper, when, and why?

Barrett and his colleagues have developed a website, Paper Through Time, in which they report on various properties of paper, such as gelatin content. The data show that gelatin content was higher before the 1500s and drops off by 1700. Unsized or waterleaf paper was easy to print but would wear easily, and it would bleed if written on. (Writing paper, he noted, was regularly sized.) For fifteenth century paper, when was sizing applied? Binders may have sized sheets after printing—this is described in Comenius’s Orbis Sensualium Pictus (1658) which shows printed sheets being sized with a sticky solution and hung to dry . Barrett theorized that printers in the fifteenth century printed on unsized paper, and that it was sized later. In order to prove this theory, Barrett worked with a pigment media specialist conservator, Susan Buck, to do small sample analyses of the ink and sizing on contemporary printed sheets. Rather like a paint pigment cross section, the paper profiles showed what he called a strange “intermixing of ink and gelatin.” Barrett described the cross sections as inconclusive but suggestive.1

Barrett then talked about his attempt to re-create the intense papermaking production rate used in the handpress period, which is typically estimated at 2000 sheets per day. Barrett’s students convinced him to try to match the historic rates of production, by attempting to produce 100-200 sheets per hour while working a 10-hour day. He calculated three staff members working with a backup team of eight helpers (preparing fiber and hanging pressed paper to dry) would need 80 pounds of rag beaten into pulp in advance. Putting in a ten hour day, by 6 pm they had produced only 1350 sheets. Why did they fail so dramatically? There seemed to be one main reason. Barrett found that the production team’s speed was limited by the slower drainage rate of the new rag raw material pulp. Old rags beat and drain much more quickly he said.

Barrett spoke about other lessons they have learned. Drying the new sheets in accordance with old period illustrations resulted in cockled sheets. Confronted with this problem, they wondered if in the hand papermaking era the paper made today was brought up into the loft, in part to dry, but perhaps more importantly to humidify the paper made and dried yesterday and still hanging in the loft. So they tried humidifying the cockled and curled sheets in a sheet plastic enclosed area with lots of moisture in the air generated by a spray mister and a pot of hot boiling water. The paper relaxed and they were able to press it, hang it to dry, and then finally dry press it flat.

Barrett hopes these high production routines may leave paper with aesthetic properties similar to those found in the early sheets, but he considers the effort still a work in progress.

Paul Romaine is an independent curator and editor based in New York. He serves as Executive Director of  North American Hand Papermakers (formerly Friends of Dard Hunter) and was president of APHA from 2008-2012.