Megan Singleton spoke about her 2011 visit to the ruins of a former hand papermaking district in Lombardy called the Valley of the Paper Makers. Proportedly established in 1384 in the mountains above the villages of Tuscolano and Maderno on Lake Garda, most of the mill sites date to the sixteenth century when the area was abandoned due to the plague. However in the late seventeenth century it came to be re-occupied and by 1730 thirty-eight mills were reopened.

In its prime, the Tuscolano-Maderno mills supplied paper to printers in Venice. Singleton described the business activities of two: Gabriele di Pietro, printer of the fourth Italian Bible (1477-78) and Paganino Paganini, originally from Tuscolano, who invested in land and mills in the area and returned with his family in 1517. His son Alessandro is credited with inventing the 24mo format and printed the first Arabic Koran in 1537-38.1

By the twentieth century the area was down to seven mills and in 1962 the last one closed when a hydroelectric plant was built. Today, the ruins can only be to reached by vigorous hiking, but in town the Museo Della Carta displays restored and recreated papermaking equipment. 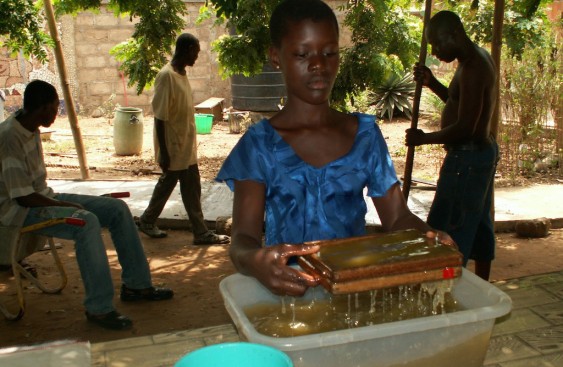 Kathy Wosika recalled her experience at Aba House, an arts and crafts center in the small fishing village of Nungua, Ghana that promotes cultural exchange and understanding. Among various crafts, it sponsors an ongoing papermaking and bookmaking project for the local children so that they may learn these techniques and create sellable products. The money from sales is then used to buy needed school supplies and shoes for the young participants.

Poverty and poor sanitation is endemic and lack of a reliable water delivery system is a constant problem. During her residency, Wosika sought local fiber sources and, after much experimentation settled on sugar cane leaves for making paper pulp. She described cooking the leaves for 90 minutes. When the fresh water delivery system broke down they rinsed the fiber in plentiful seawater, and then gave a final rinse in the scarce fresh water. Wosika also described printing the papers with traditional Adinkra symbols and teaching Coptic and stab style bindings.

While Wosika was frank in recounting difficulties and setbacks that might discourage a person less willing to experiment, she found her visit to be a rewarding and eye-opening experience culturally, physically and emotionally. ABA house is always looking for volunteers to work with local people in creative ways.