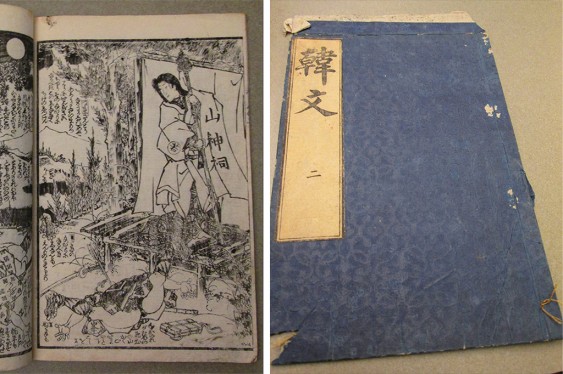 Kazuko Hioki and Anne Covell’s presentation took us from the Edo period in Japan (1603–1868) to the present day at the University of Iowa’s Center for the Book. Kazuko displayed examples of Japanese books, which were mostly side-sewn folded sheets printed from finely carved woodblocks. Some had embossed and decorated covers created from layers of recycled and dyed paper.

Books in the Edo period were produced in standard sizes, depending on the subject matter, and the cover style and color varied according to subject and use. (For example, later fiction covers were primary reds, yellows and blues, where red denoted a children’s text and blue/yellow an adult text.)

The book industry in the Edo period was hugely profitable and competitive. Records show that there were more than 6000 printers, and that paper was the third most taxable commodity after rice and lumber. As the industry grew book covers became more elaborate with multi-colored blocks and cover images that revealed themselves when multiple volumes are laid side by side. (Woodblocks, used in Japan since the eighth century, were prominent until the 1890s. Movable type was brought from Korea and Europe in the 1590s. Type made from copper was used by Shogun Ieyasu in the 1610s.) 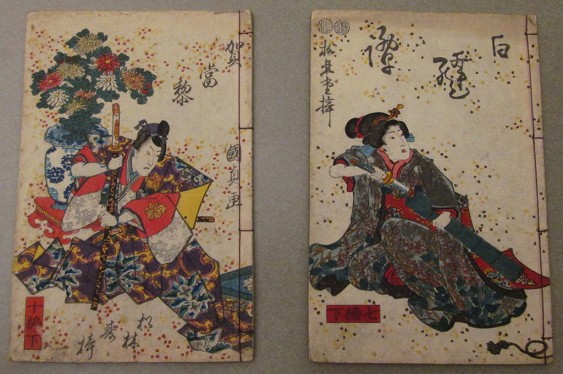 To learn more about the making of the embossed patterns used in Edo period book covers, Anne and Kazuko re-created as much of the process as possible, beginning with collecting old Edo period books and pulping the text pages as a source of recycled paper. To remove ink the pulp was soaked in wood ash and water and beaten. Repeated washings and beatings removed more of the ink to create a whiter pulp. This pulp was mixed with a formation aid and formed into sheets.

A second trial used raw kozo as a base fiber, and over-processing of the pulp yielded a soft, thick sheet of paper. These sheets were then laminated into covers with a thin paste, using two or more sheets of recycled paper and a thin cover sheet of high-quality, dyed paper. This was then test embossed using polymer plates and laser-cut oak boards (which, when burnished with an agate tool while the sheets were damp, created an embossed pattern similar to the Edo style covers.) 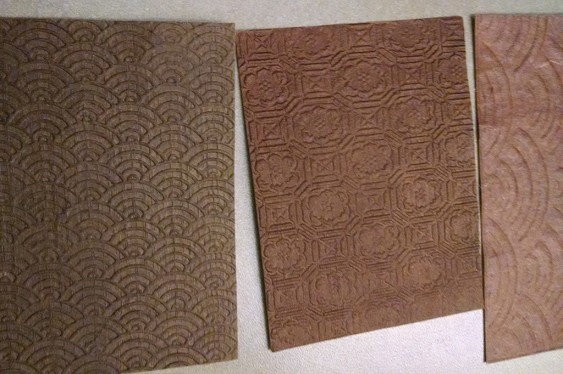 Val Lucas is an artist and letterpress printer. As proprietrix of Bowerbox Press, she prints hand-carved woodcuts along with metal and wood type to produce limited edition prints, cards, and hand-bound books. As part of the Chesapeake Chapter, she organizes their yearly collaborative calendar and was President of the Chapter from 2012-2014.