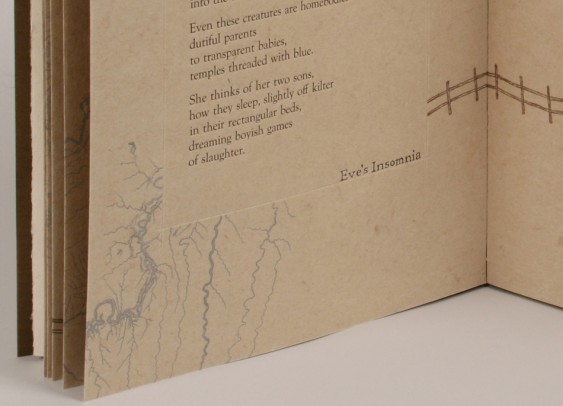 One of a Thousand Fires, 2006. Poems by Cissy Ross, book design, images, printing and binding by Inge Bruggeman.

Inge Bruggeman‘s talk began by focusing on the relationship between ink on paper and questioned our culture’s confidence in its permanence in our environment. Given advances in technology and the ways in which we interact and communicate, she asked how long will paper and text last? Will it stay forever? The printed page can be seen now as a nostalgic place to hold ideas. Paper and printing are being pushed towards objectification and art rather than everyday events and objects. What is the relevance of paper in general and the relevance of paper in artists’ books? There are still elements of culturally relevant paper, such as a receipt roll from a grocery store, as well as ramifications of shifting away from paper based environments. Inge noted her concern about the future of the archive. Will there be an impact on the scholarly record when studying or doing research from disc or flash drives?

Her talk addressed the functional shift in printed matter rather than its potential disappearance. Art that questions the role of paper as art rather than the document’s substrate is her focus. She noted environmental considerations, and the ever present anxiety of the blank page. Paper is a form of knowledge. The paper era of everyday life is disappearing and this evolution is being documented by a variety of authors.  A heightened awareness of book arts leads to appreciation of paper’s potential.  She showed a variety of works by Carl Haase, Sandra and Harry Reese, John L. Risseeuw, Sarah McDermott, and her own creations, all of which used handmade papers either out of economic necessity, aesthetic requirements or as an integral part of the book itself. The flexibility of paper is its true value and taking time to think about the role and the voice of the paper in adding complexity and depth to the overall work is important. 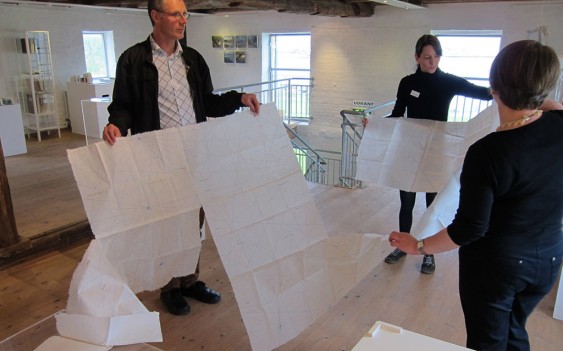 Whether for her own work or for teaching a class, thinking about all of the components before starting a project is very important. Tatiana Ginsberg‘s students are taught the importance of thinking through paper and ink. Paper is neither an edge nor a margin. It’s a substance rather than a substrate. Before any work begins, she asks the following: What should the fiber be? How should we start? How should we treat it? How should it be beaten? What kind of mould should be used? What will be the sheet forming method? Will there be interleaving of drying felts? How much pressure should be used to extract the water? What is the drying method? These questions and issues should always be considered when thinking about the project’s concept and execution.

Tatiana shared four ideas about paper and its possibilities. There are the concepts of “on,” “in,” “of,” and “through.” “On,” whether drawing, printing, or writing on the paper’s surface, reminds us that all paper has a purpose and is good for something. As Tatiana noted, toilet paper is good at its job. “In,” embedding or layering during the wet stage includes pulp painting and couching allowing the material to be touch without really being touched. “Of,” using significant fibers or pulp, such as military uniforms, rice bags, or flags to make paper allows us to read the paper itself, to rely on the paper to preserve its own history. Finally, “through” includes transparency or translucency and is exemplified with watermarking, cut-outs, after-images, or any other method of multiple, simultaneous viewings. Tatiana’s examples included Helen Hiebert’s String Theory, Kuboaa’s Eclipse of the Moon, Robbin Ami Silverberg’s pulp texts in Clew, William Kentridge’s Sheets of Evidence, and others. 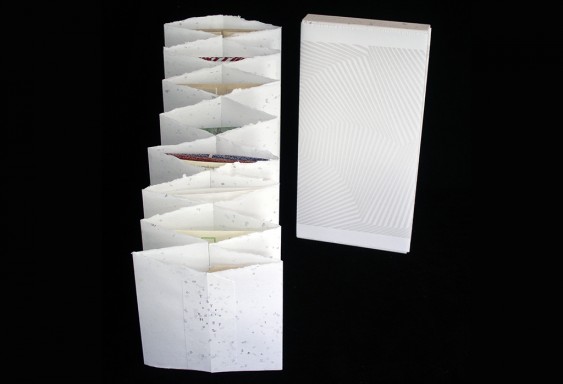 Book made with paper from Cave Paper and slipcase for the Scripps College Press book, This Tends to Happen, 2005. (Kitty Maryatt)

As Director of the Scripps College Press, Kitty Mayatt uses both European mould-made and handmade papers for her students’ collaborative artists’ books. She teaches a course at Scripps in which students make 100 books every semester.  The goals of this letterpress course are to create a limited edition book in the given semester including setting type, printing, and binding; develop an idea based on a subject provided by Kitty and create texts; integrate text and imagery, develop technical skills, and learn project management skills. Kitty outlined the various steps and challenges of their recent book, This Tends to Happen. When freshmen entered Scripps College that year, they were required to read William Gibson’s Pattern Recognition. Using Gibson’s thesis that everything is pattern recognition, the students discussed how they could develop patterns and wrote their own texts to be printed for this project. When it came time to design the book, they weren’t able to find a commercial paper that fit the size and shape of the leaves they intended to create. Paper moulds, we were reminded, dictate the physical size of the book. Fortunately, Cave Paper’s new 48-inch mould was the perfect solution. The paper was formed to the size and shape necessary for the Scripps College edition, which was an unusual proportion in a wedge shape of 42 3/8” x 12”, and they needed two pieces per book. Gerald Lange, a Los Angeles based letterpress printer, provided offprints and rejects from which Cave Paper created new sheets which remarkably retained the printed letters in random patterns. Although the printed paper was put through a beater, the letters had been printed in oil-based ink and were still visible on the new sheets.

Another example of students making paper was for the assignment, Words That Burn (1996). The students attended a weekend workshop with paper artist Cal Ling, and later made their own spirit paper using materials they found personally significant. One bifolium of Kitty’s most recent book for her own Two Hands Press required a large mould that would match the size of the 22” x 30” Rives BFK sheets she was already using for the book. In order to make the paper, the pulp had to be poured into the mould, rather than the mould being skimmed through a vat of pulp. The high quality of the work coming from Scripps College Press is testament to the success of the program and to the continuing fascination with the physical book.