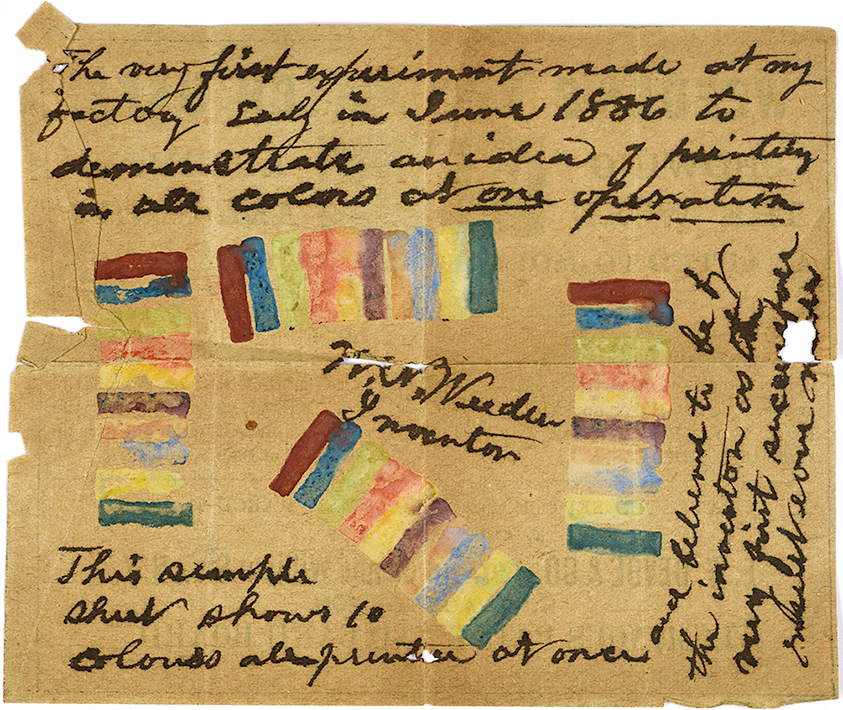 Amelia Hugill-Fontanel discussed a compelling new acquisition of the Cary Graphic Arts Collection at Rochester Institute of Technology: the diary of the nineteenth-century Massachusetts inventor and artist William Nye Weeden (1841–1891), which details his heretofore little-known process for multicolor printing.

Weeden’s diary explains that he had become interested in color printing after seeing examples of chromolithography while working in Boston in the 1870s. Deeming the chromolithographic process too tedious and complicated, he came up with a simpler and faster process he called “multitudinous tints,” in which the printing block itself is made of ink.

The process, described in detail in the diary, uses a dry powdered color mixed with a transparent gum to create a malleable substance that can be shaped into a printing block of a desired shape. Once hardened, the block is dampened and printed onto paper. Some simple examples of his process are printed into the diary.

The problems Hugill-Fontanel encountered when trying to duplicate the multitudinous tints process probably help explain why Weeden’s diary ends so abruptly: the process ultimately yields a poor quality print, and certain technical aspects of production make the practice unfeasible. Nonetheless, the diary remains a fascinating record of “Yankee ingenuity,” and an important index of a nineteenth-century inventor’s thought processes. 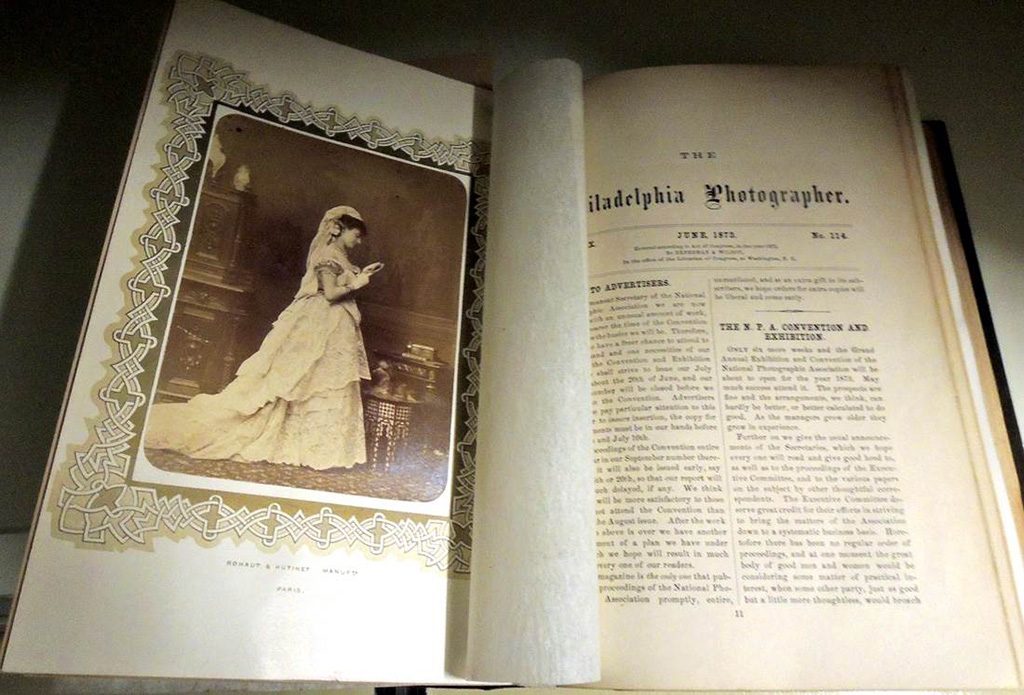 Julie Mellby shared the story of Edward Livingston Wilson (1838–1903), who for nearly forty years published the nineteenth-century’s preeminent American photography journal. Each issue of Wilson’s Photographic Magazine included an actual photograph, for Wilson believed that photographs must been seen firsthand (not translated through engraving, as was the practice in other journals of the day) to be understood.

Begun in 1864 as The Philadelphia Photographer, Wilson’s magazine provided a previously nonexistent means of communication among photographers, offering articles about craft, technique, equipment, photographic experiments and innovation. The singular feature of each issue, though, was the photographic specimen. Wilson published the photographs of professionals (William Bell, Jeremiah Gurney, Eadweard Muybridge) as well as amateurs, including the cross-dressing circus performer known as Lulu Farini. Mellby discussed a number of very interesting biographical points on Farini, whose photograph of the Kalahari Desert (“Cape-Town, Africa”) was included in the September 1887 issue of The Philadelphia Photographer.

Renamed Wilson’s Photographic Magazine when publication moved to New York in 1889, the journal was produced in numbers reaching 6,000 per month at the height of circulation. Mellby explained that in order to produce the photographs in such great quantities, Wilson worked from multiple negatives—this is, different photographs—similar enough to each other to all be well-described by the accompanying text. This, of course, makes the magazine rather complicated from a bibliographic standpoint: for each issue of the magazine, there are variants, each differing by which version of the photograph was included.

Nearly a full run of Wilson’s Photographic Magazine is held by Princeton University Library’s Special Collections, whose staff members have created an index of the photographs included from 1864 to 1901.

Josef Beery and Amanda Nelsen printing on the common press at the University of Virginia. (Laura Perrings)

Amanda Nelsen and Josef Beery’s talk explored the physical experience of production when combining letterpress and copperplate printing within the same book. Their very hands-on experiment involved working with two wooden presses at Rare Book School, at the University of Virginia in Charlottesville.

The University of Virginia has long owned a full-scale reproduction of a wooden common press frequently used during Rare Book School courses. Recently, RBS commissioned a reproduction of an eighteenth-century wooden rolling press built by the scholar-bookseller Roger Gaskell based on Denis Diderot’s diagrams in his famous Encyclopedié. Nelsen and Beery decided to jump headlong into production, printing two versions of an eight-page pamphlet: one with a woodcut illustration, done entirely on the common press; and one with an engraved illustration, run through both presses.

The results of Nelsen and Beery’s experiment suggest one possible reason why the combination of the two printing methods is somewhat rare: it is much more time-consuming. They further reported that according to Gaskell, it would have been about three times more expensive to include copperplate printing within a letterpress publication.

Conference attendees got to take home the fruits of Nelsen and Beery’s printing labors: charming keepsake editions of the introduction to Blake’s Songs of Innocence. 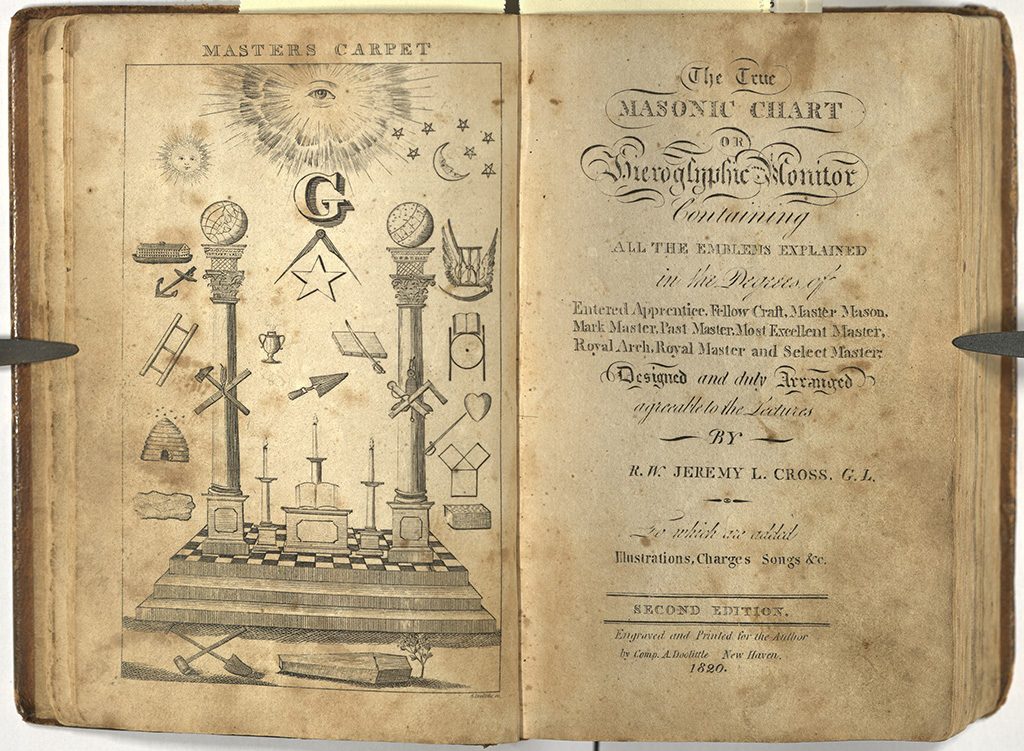 Hilary Anderson Stelling’s presentation was on Jeremy Cross (1787–1861), an American innovator in the instruction of Freemason rituals. Guidebooks to Freemasonry, called “monitors,” teach the non-secret practices of the brotherhood, leaving out the closely guarded secret codes, handshakes (called “grips”), etc. Cross’s monitor was the first to include multiple engravings of Masonic emblems, which proved to be a popular and enduring addition to Masonic tuition.

Cross was a disciple of Thomas Smith Webb (1771–1819), an important early promoter of Freemasonry in America. Since the late eighteenth-century, Webb’s Freemason’s Monitor had served as the standard reference work in American Freemasonry. In 1819, Cross published his own monitor: The True Masonic Chart, or Hieroglyphic Monitor. The text was nearly a word-for-word copy of Webb’s work; Cross’s important contribution was in his inclusion of over forty plates of emblems. Cross rightly predicted that the engravings would help members better remember the rituals; The True Masonic Chart quickly became a commercial success, and exerted a lasting influence on Masonic material and visual culture.

Stelling shared pictures of a number of Cross’s influential emblems, which were done by the Connecticut copper plate engraver Amos Doolittle (1754–1832). Best known for his 1775 engravings of the battles of Lexington and Concord, Doolittle was also a devoted Freemason, and engraved Masonic certificates and designs for ceremonial Masonic aprons.