Edmonds, S. Emma. E. Unsexed; or, The Female Soldier: the thrilling adventures, experiences and escapes of a woman, as nurse, spy and scout, in hospitals, camps and battlefields. Philadelphia: Philadelphia Publishing Company, 1854. Stamp engraver unknown. From: “Publishers’ Bindings Online, 1815-1930: The Art of Books” University of Wisconsin-Madison and University of Alabama.

The scholarly work of Kadin Henningsen, a doctoral student at The University of Illinois at Urbana-Champaign, considers book history through a queer and trans framework. He has coined the term biblionormativity, which he defines as the aesthetic norms of books and print culture that contribute to the formation of cis-heteronormativity (the socially-constructed concept that gender identities corresponding to birth-assigned sex, and heterosexuality, are “the norm”). In his presentation, Henningsen pointed out the gendered biblionorms observable in representations of male and female figures on 19th century American illustrated publishers’ bindings.

Using images from the University of Wisconsin-Madison’s Publishers’ Bindings Online database, Henningsen underscored a remarkable regularity among depictions of gendered figures in gilt-stamped binding cover centerpieces of the period. Male figures are most often shown full-bodied (i.e., from head to toe), usually outdoors, and are sometimes in the company of other men. Male figures are usually not contained within a decorative border; if they are, the border is typically in blind rather than stamped in gilt or ink. Female figures almost always appear in fragmented form, that is, with the image cropping out part of her body. The scene is nearly always domestic, and the female figure is usually alone, and contained within a border. When the female figure appears full-bodied or outdoors, she is either accompanied by a male figure, or is a mythical character.

After establishing the biblionorms imposed by representations of male and female figures, Henningsen presented a book whose cover shows an interesting intermingling of gendered biblionorms. Unsexed; or, The Female Soldier, by S. Emma Edmond, is the 1864 memoir of a woman who served as a man with the Union Army during the Civil War. On the cover, the hero is depicted in uniform on horseback, full-bodied, and outdoors (masculine); she is, however, contained within an ornate, circular, ink-stamped border (feminine). Henningsen argued that her representation as alone and outdoors additionally puts her in the category of the mythical, or “fictitious” woman: her gender transgression renders her, in a sense, make-believe, or worse, deceptive.

Henningsen explained that the biblionormativity exemplified in publishers’ bindings was by no means happening in a vacuum. There was widespread cultural anxiety in mid-19th century America about the alignment of exteriority and interiority. The 1840s saw the first city laws criminalizing cross-dressing, and in the following decades over 40 cities across the country enacted laws regulating gender-specific clothing. Such laws remained on the books for well over 100 years, and unfortunately, law-enforcement profiling and harrassment of gender-nonconforming people continues today. 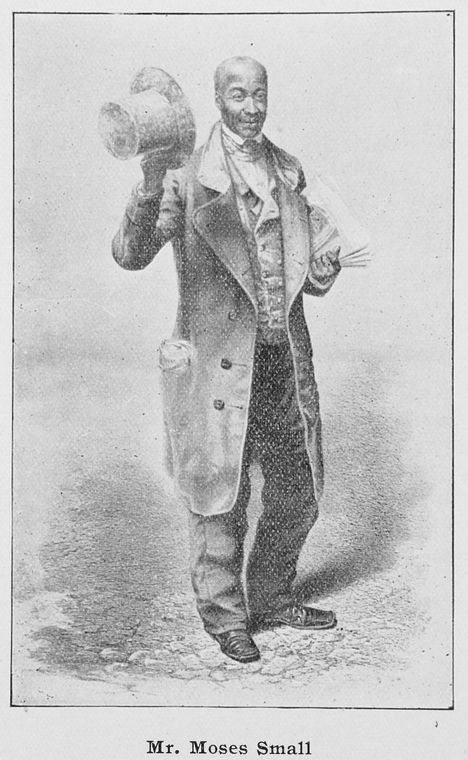 Douglas McElrath, the Director of Special Collections and Archives at the University of Maryland, invited attendees to consider some possibilities of the life of Moses Small of Baltimore, an African-American newspaper vendor of the 19th century, about whom few biographical details remain. Small, immortalized in a much-reproduced portrait by Thomas Waterman Wood (the original now belonging to the Fine Arts Museums of San Francisco), was a beloved fixture of the Baltimore city-scape for nearly fifty years: he roved the streets hawking papers between 1813 and 1857. According to McElrath, Small could also very plausibly have been a secret agent of the Underground Railroad.

In the decades leading up to the Civil War, though Maryland was a slave state, the city of Baltimore had the largest free Black population in the country. It was among Baltimore’s free Black community that Harriet Tubman, in 1850, found help in conducting her first rescue mission: saving her niece, Kessiah, and Kessiah’s two young children from the fate of the auction block before shepherding them to freedom in Philadelphia. At the time, Moses Small, a freedman, was probably the most famous Black man in the city. An 1861 obituary, in fact, suggests: “Perhaps there was no person better known in Baltimore than Moses Small….”

McElrath argued that Small was particularly well-positioned to play a role in subverting slavery in Baltimore: he was a local celebrity, probably deemed innocuous by the authorities; his work ensured he was able to roam freely throughout the city without arousing suspicion; and, perhaps most importantly, he had strong ties to the printing trade. Small’s connections to jobbing printers, for instance, might have given him advance access to the content of broadside advertisements seeking the whereabouts of fugitive enslaved people; such information could be used to help allies beware, protect, and remain hidden. Small could very well have known printers willing to forge printed manumission papers, which were seen as more authoritative and were less likely to bear the same scrutiny as manuscript documents.

There is no conclusive evidence to prove that Moses Small engaged in furtive services for the Underground Railroad. The project of imagining him doing so, however, allowed McElrath to highlight the various ways free Black people, through literacy and expertise in printing technologies, worked to undermine the forces of American slavery.