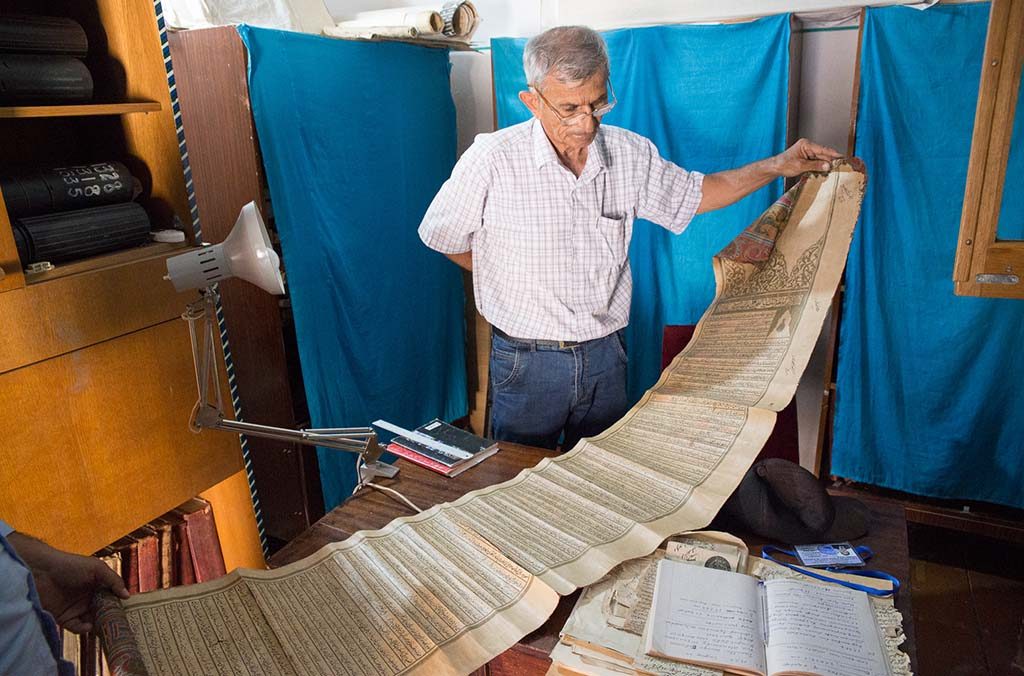 Johan Solberg shared his recent research on historical papermaking in Central Asia, the geographical conduit through which paper technology moved from the Eastern world to Europe over a thousand years ago. Few sources remain to shed any light on how paper was made in the region when it first appeared there in the seventh or eighth century; the lack of available scholarship led Solberg to plan a trip to Uzbekistan in search of answers.

Solberg began in central Uzbekistan, in the museums and libraries of Samarkand, one of the oldest cities in the region. Papermaking in Samarkand is mentioned in texts as early as the nineth century, but today, as Solberg discovered, there remains only one operating paper mill there.  Solberg visited it, and was mildly disappointed to learn that though they use ancient methods for beating fibers, the rest of their paper production process relies on much more recent European techniques and tools.

Solberg’s research in Kokand, in eastern Uzbekistan, led him to discover the work of two early 20th century Russian ethnographers who documented the city’s papermaking industry. Samuil Dudin produced a series of photographs in 1900 of Kokand papermakers at work. Thirty years later, after traditional papermaking had all but disappeared from Kokand, Grigory Grigorev interviewed former papermakers and produced a detailed report of their processes.

Combining his first-hand observations with what he learned from the work of the Russian ethnographers, Solberg was able to construct a paper mould which very closely approximates the kind that was used in Kokand in the early twentieth century (and probably much earlier). His experiments using it to make paper yielded mixed results, but he looks forward to future research trips to Central Asia to help him improve the process.

Rie Hachiyanagi gave an overview of contemporary carriers on of traditional papermaking in Japan. Though many younger Japanese in papermaking families have abandoned the craft of their ancestors for more profitable work, Hachiyanagi has met enough dedicated paper makers in Japan to give her confidence that traditional methods for making washi (handmade Japanese paper) will be preserved into the future.

Hachiyanagi began by introducing the Kubota family of Hamada, in Shimane Prefecture, famous for their Sekishu-washi, a very high-quality paper used for stationery, certificates, etc. The great patriarch of the Kubota family, Yasuichi Kubota (1924–2006), was a mentor to University of Iowa Center for the Book Director Timothy Barrett, who in turn was a mentor to Hachiyanagi. The Kubota family enterprise is now run by Yasuichi Kubota’s son, Akira Kubota; Hachiyanagi shared a video of him demonstrating his mesmerizingly graceful couching technique.

Hachiyanagi also shared some pictures and videos of craftspeople at work in the papermaking community of Echizen, a city whose primary industry has been washi for about 1500 years. In other parts of Japan, papermaking is traditionally a farmer’s winter job, done after the rice-harvesting season—but paper is made year-round in Echizen. The paper mills of Echizen are a popular tourist destination, and according to Hachiyanagi, Echizen is the best place in Japan for English speaking people to learn about traditional Japanese papermaking.

There is one problem that still worries Hachiyanagi about the future of traditional Japanese papermaking. Gampi, one of the main plants used to make washi, must be obtained in the wild, and those with the closely-guarded knowledge of how to navigate the often secret, sometimes treacherous mountain-forest pathways to cultivate it are gradually dying off. Further, harvesting gampi is a nuanced skill that must be long-fostered; an uninitiated gatherer might ruin the quality of future yields.