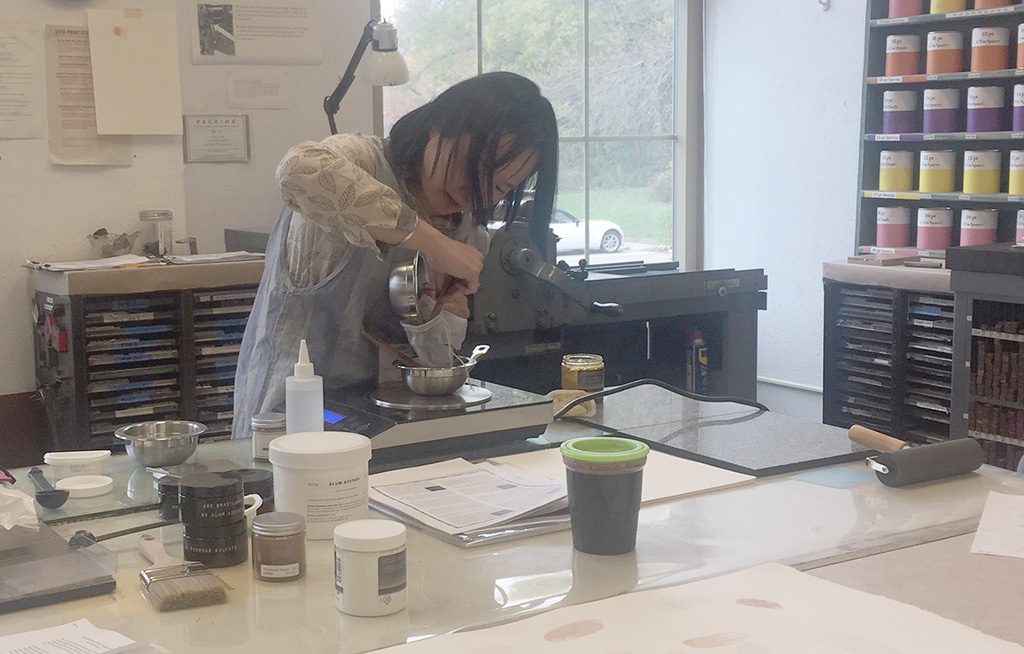 Ms. Liu started her demonstration by showing participants previous printing experimentations she had created. To create her inks, Liu uses natural dye extracts, water, mordants and Akua Intaglio Transparent Base, which is a hybrid of water and oil based inks. Some of the collagraph prints she shared, showed how different natural dye and mordant inks react with different metal surfaces. It was really exciting to see her experimentations. Liu then showed participants how to prepare the dyes and mordants to create concentrated liquids that could then be mixed with the ink.

To create a concentrated natural dye liquid, Liu heated up a plant extract with water on an induction cooker and then strained the liquid. Each person that attended the demonstration was given recipes Liu developed to create the concentrated liquids and inks.  Liu then demonstrated printing with the natural dyes and heat setting the ink after printing. Participants got the opportunity to print a collagraph on two presses. One of the presses had ink that had been made with a natural dye, the other had ink that Liu had mixed with a mordant. Some of the people who attended the demonstration had never printed on a press before. It was really exciting to watch people print for the first time, as well as seeing how the natural dye reacted to the mordant after heat setting the print. Everyone had a wonderful time. I left feeling  excited about creating my own natural dye inks and hope to one day incorporate natural dyes inks into my own letterpress prints.

Amy Childress is a first year MA/MFA candidate at the University of Iowa Center for the Book and School of Library and Information Sciences.