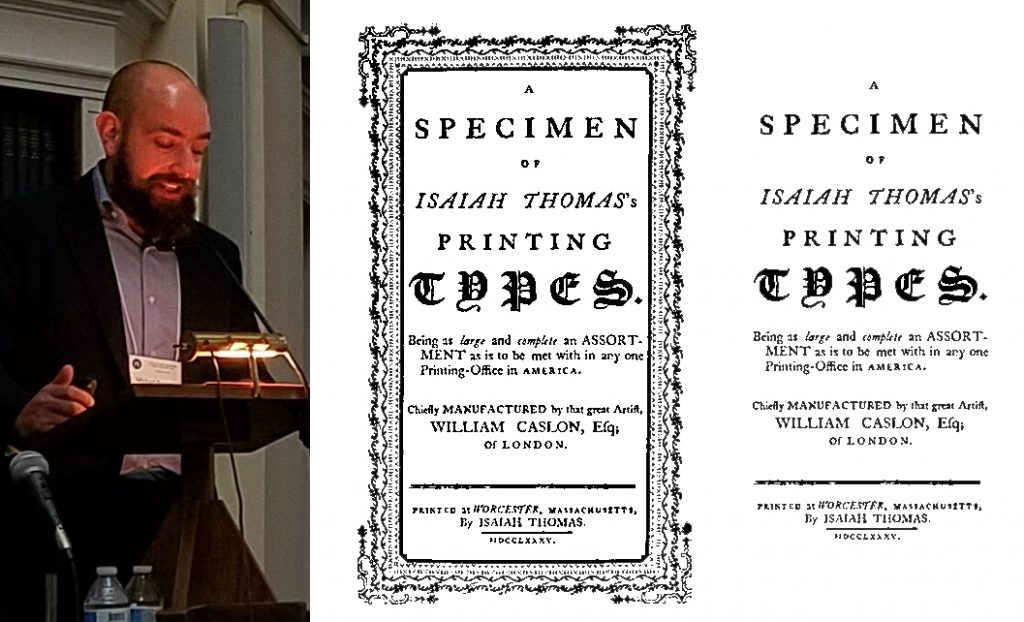 Friday, October 6, 3:15-5:00 pm ★  Lynne Farrington, “A Very Good Book Indeed: Selling Bibles by Subscription in Nineteenth-Century America” ★ Vince Golden, “Mistakes and Mishaps in Early American Newspapers and What They Can Tell Us” ★ Michael Russem, “Ornament and the Printed Book in America” ★ Emily Sneff, “The Substance and Style of the First Printing of the Declaration of Independence” 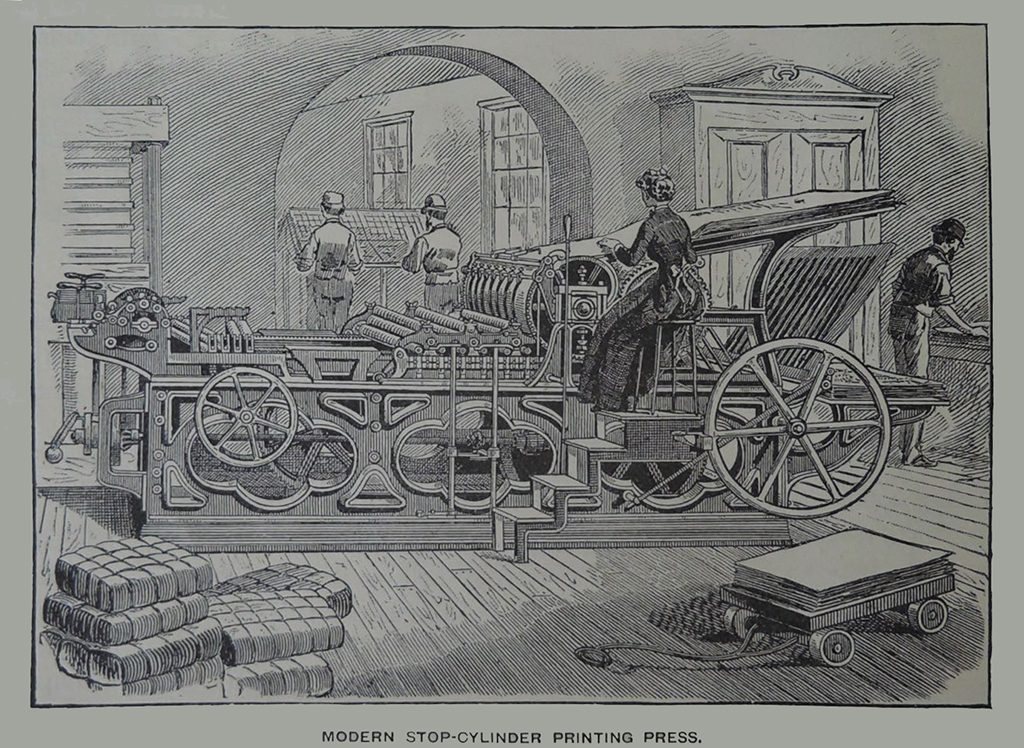 Lynne Farrington of the Kislak Center at the University of Pennsylvania spoke on publication and sales methods that supplied Americans with books from the late 1700s through the nineteenth-century, with an emphasis on the Bible. She noted in earlier times advance subscriptions were sought as a means of soliciting financial support for expensive publishing projects. From this grew the uniquely American phenomenon of door-to-door solicitation by agents to create greater demand for their books.

The first English Bible printed America was probably Robert Aitken’s in an edition of 10,000 copies in 1782. In 1801, Matthew Carey published an edition of the King James Bible. That was so successful that by 1803, he was able to buy enough type to keep it in standing type. He dominated the marketplace for 20 years, ultimately publishing 60 editions at different prices, on different papers, with different bindings, and in larger and smaller fonts, and with additional illustrations and maps.

Stereotyping which allowed text to be reproduced on multiple plates, allowing expensive type to be reused. The American Bible Society embraced the technology to produce cheaper bibles more efficiently. In the 1840s, Harper and Brothers developed a prototype of new, large, heavily illustrated Family Bibles. Harper’s Illuminated New Pictorial Bible sold in 54 parts to subscribers for 25 cents each. Another new process, electrotyping, made plates of illustrations that held up to new, high-speed printing processes.

The Zinman Collection in the Kislak Center comprises over 3,500 canvassing and sample books showing the methods and materials used. The included sales pitch, which agents were urged to memorize, might urge selling regular books and Bibles together. Later, catalogs of available Bibles and books were added as an up-to-date method to show a larger line of books and to guarantee that all the goods would be exactly as represented.

“York New Times and Evening Star,” with the added typo of the capital “S” in “Star” set upside down. (American Antiquarian Society)

Vincent Golden curator of newspapers at the American Antiquarian Society presented a series of errors, typos, omissions, and accidents which show, as he said, “It is the little mistakes they make or the conditions that force them into compromises that gives hints as to what is going on in the print shop.”

Typographical errors abound. The Daily True Democrat of Cleveland which had its share of typos in the dates: NOVEMBER ITHA, 1850; EBRUARY 18, 1851, and SEPTEMBER 31, 1851 shared the spotlight with the South County Journal of Wakefield, RI which on Dec. 11, 1858 spelled County “Conuty” in big text letters at the top. Even the New York Times and Evening Star was not immune. On September 4, 1840, the masthead read, “York New Times and Evening Star,” with the added typo of the capital “S” in “Star” set upside down.

The North Carolina Times of New Berne on December 2 explained its non-appearance the previous Tuesday because rats had eaten their rollers made of glue and molasses. The Daily Constitutionalist of Augusta, GA noted on August 31, 1861 that due to accidental piing of type, “the falling into pieces of a form of type, on removing it from the stone to the press—we unable to issue a paper yesterday.” The same paper apologized on Nov. 29, 1864, “As all our employees were under arms at the trenches…we were unable to issue an afternoon edition yesterday….”

Perhaps the oddest was example was Jim, the printer’s devil, who was partially blamed for the late appearance of The San Antonio, Texas Ledger on Dec. 8, 1853 because, “instead of putting in type the copy we gave him, undertook the production of something entirely original …. On looking over the proof-sheet, we declined giving it a place. A large portion of this production is in a language we do not understand….” 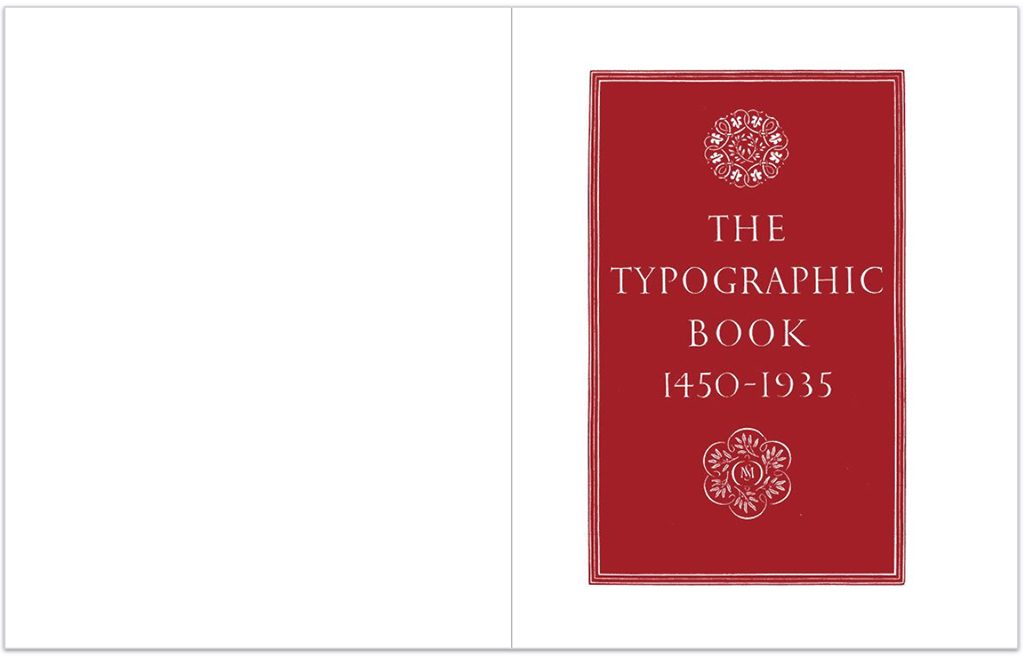 Michael Russem, designer at the Kat Ran Press, spoke about ornament and the printed book in America. He told how he studied The Typographic Book, 1450-1935, by Stanley Morison and Kenneth Day. It had everything, he said, it was big, scholarly, and beautiful and “was set in Bembo.” Although he read it from cover to cover, he can’t recall one word or thought imparted by the authors, but he always remembered the title pages shown in the book. This was type over ornamentation. For years when he was stuck, he turned to the book. All the old guys, he said, had already tackled any problem he might encounter. He was largely drawn to the typographic specimens, but not the ornaments, trying to figure out how the old guys did more with less. “each page must have taken tremendous confidence—perhaps even arrogance—for them to say ‘That’s enough.’ Just as it took arrogance for me to suggest that ornamental typographers are insecure.”

He provided examples of a number of title pages. First as used with ornamentation, then with ornamentation removed. His theory is that pages are no worse off for the loss of floral borders and the occasional leaf or flourish. “We don’t suffer without them, and if they hadn’t been there, nobody would have complained.”

He called Bruce Rogers and W.A. Dwiggins “showoffs,” and said the clients kept coming back because they could see what they paid for.

Today, books contain less decoration and the readers can concentrate on what they are reading. He noted, it takes courage to leave out ornament and let the typography stand on its merits. Michael Russem’s full presentation can be read on his website.

The variations could be in spelling and even word choice, but more frequently in capitalization and punctuation. They started with the first word and continued throughout the various versions. The first word appeared in the first broadside printed by John Dunlap as [W]HEN with no punctuation, and in the first newspaper edition printed by Benjamin Towne as [W]HEN with a comma following. The bare minimum of capitalization was in the Maryland Gazette: of words such as God, Great Britain, English, Indian, British, etc. for less than 10 words total. By comparison, Dunlap’s Pennsylvania Packet had over 50 capitalized words, and over 300 words were capitalized in Dunlap’s broadside.

The text of the Declaration of Independence spread through the newly United States over the course of a few weeks, with newspaper editions first appearing as follows: in Pennsylvania, July 6; Maryland, July 9; New York, July 10; Connecticut, July 12; Rhode Island, July 13; Massachusetts, July 16; Virginia, July 20; and South Carolina, August 2 (there are no known newspaper editions from New Jersey, Delaware, North Carolina, or Georgia). The Declaration was first published in non-English form in the Pennsylvanischer Staatbote in Philadelphia on July 9, and in book form by Robert Bell in Philadelphia on July 8.

Some of the early broadside printings of the Declaration included state resolutions about the approbation, distribution, and public reading of the Declaration. In Massachusetts, for example, The Council adopted the following on July 17, 1776: “ORDERED, that the Declaration of Independence be printed ; and a Copy sent to the ministers of each parish, of every Denomination, within this STATE ; and they severally be required to read the same to their respective Congregations, as soon as divine Service is ended, in the Afternoon, on the first Lord’s-Day after they shall have received it : –And after such publication thereof, to deliver the said declaration to the Clerks of their several Towns or Districts ; who are hereby required to record the same in their respective Town, or District Books, there to remain as a perpetual MEMORIAL thereof.”

The New York Journal printed by John Holt on July 11, 1776 recognized that readers would want to preserve the Declaration of Independence. It was printed in an attractive 2-column layout on a separate sheet, the editor explained, “to oblige a number of our Customers who intend to separate it from it from the rest of the paper, and fix it up, in open view, in their Houses, as a mark of their approbation of the INDEPENDENT SPIRIT of their Representatives.” Even in these early, “breaking news” versions of the Declaration of Independence, there was an understanding of the importance of the text and what it represented.”

Good, But Not So Fast or Cheap by Michael Winship. “The following paper was intended to be the keynote address at the APHA/CHAViC Conference. While Dr. Winship was unable to  deliver it, the American Printing History…”