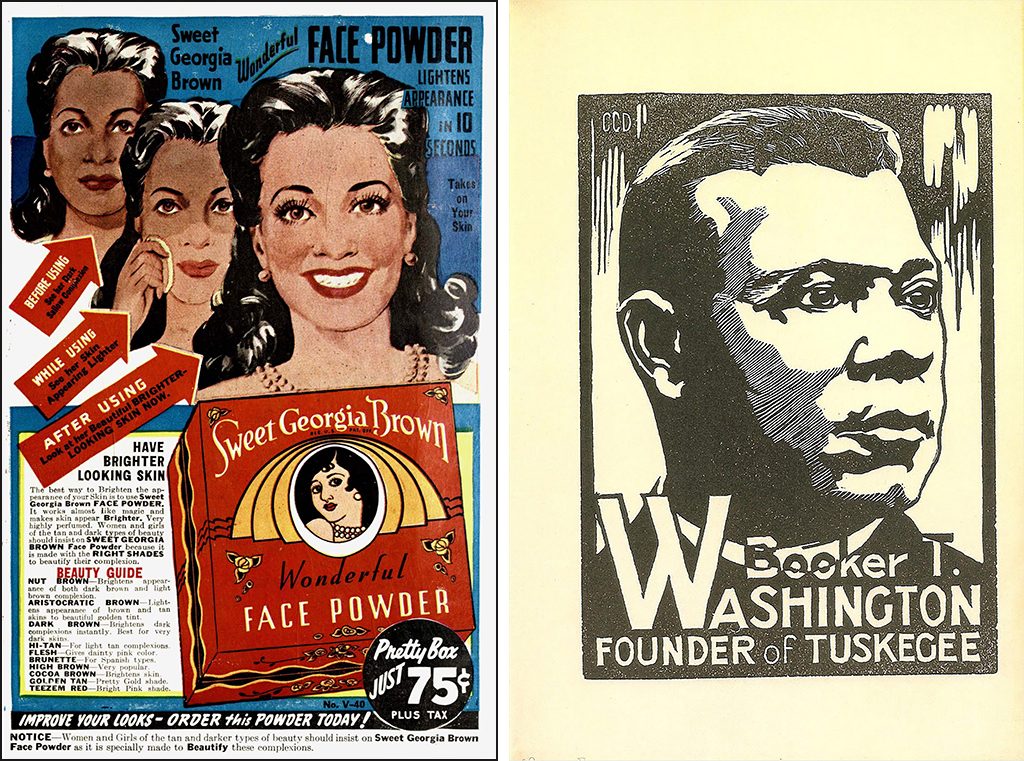 Fri., Oct. 25 |   “Outside in: image and words of assimilation and resistance in American print history” by Colette Gaiter, Professor, Art & Design and Africana Studies, University of Delaware. Professor Gaiter is an artist, graphic designer, and writer. Her work over the years includes mixed and digital media, video, interactive installation, and digitally manipulated photographic prints. Her remarks came from the perspective of a maker as well as an educator and scholar, which embodies the spirit of the APHA conference.

Prof. Gaiter began her talk with the notion that humans desire to record the past and imagine the future. And that when we see something from the past we should keep in mind that likely the reason it survived is because someone thought it was important enough to keep. When we look at these saved objects over and over they become our history.

Then she introduced us (or reminded us) of Marshall McLuhan’s theory of hot and cool media. Cooler media require more involvement on the part of the reader. Print falls into this range because it requires reading to become active. Screens are hot media because it is a more passive interaction on the part of the reader. Printed images force us to figure out what it means; it takes more interaction.

Next, she presented a series of images for the audience to consider: how do we figure out what this means?  She showed 19th, 20th, and 21st century printed ephemera that dealt with the intersection of immigration and race. In the 1920s we see ‘patriotic’ materials that show images of blond, white people to set our expectation that is what is American; this is during a period of increased immigration. Prof. Gaiter showed other ephemera that was aimed at defining what is American, such as a poster from the 1800s against Chinese immigrants, and a contemporary “It’s OK to be White” poster. She concluded this section by talking about why the issue of The New York Times Magazine featuring the 400th anniversary of slavery in North America sold out each printing—not only is the content of interest to a great number of people, but they want to hold it in their hands to read it, not just access it online. She feels that printed pages still give ideas gravitas more so than the internet.

Prof. Gaiter also looked at contemporary and historical newspapers. She talked about how when people parody publications it can “grant more influence” to the original. She cited examples of  Occupied Wall Street Journal (2011) as well as Not The New York Times (1978) published during a two-month strike of the newspaper. She discussed the importance of immigrant newspapers in the early 20th century and how racial stereotypes were often employed to encourage immigrants to distance themselves from Black people. Cautionary stories about lynchings in the South and even nearby Delaware promoted White identity in the U.S.

The next section addressed “Omission/Revisionist history.” Prof. Gaiter used the example of the 1973 Westvaco (originally West Virginia Pulp and Paper Company) limited edition publication designed by Bradbury Thompson of a 1670 publication that described New York. Gone were all mention of the “savage” customs of native peoples and what was retained was the idyllic description of the landscape. Yet in another design by Thompson touting that “paper conveyed concepts that healed the wounds of our nation,” he prominently included a Confederate flag flying behind the train that delivered goods, including paper, across the nation. These ideas of what is American are deeply embedded in U.S. mainstream mediated culture.

Among Prof. Gaiter’s many examples was Émigré magazine, started in the 1980s by two European immigrant graphic designers, which examined the impact of digital technology and the role of the designer. Émigré is best known for its design of fonts created with a postmodern and computer-generated sensibility that was hated at the time by more traditional designers. She then segued to the idea of “double consciousness” for black Americans and how this affected the design career of Charles Dawson. While creating the ABCs of Great Negros (1933) he was making a living by designing ads for the Valmor Company, which produced beauty products marketed to black women that encouraged assimilation through lighter skin and straighter hair.

The next section focused on “DIY and Sharing” and “own[ing] the means of production.” Examples included the work of Polish émigré artist Piotr Szyhalski, whose “Labor Camp” helps groups produce large scale printmaking projects in support of social justice. His banner producing apparatus was used in Minnesota Black Lives Matter protests, among others. Another organization is “Just Seeds,” founded by artist Josh MacPhee. This activist printing organization also offers freely available digital images to promote local protest movements. Native people’s activism is also producing a new era of printed ephemera. An example is the “Rise and Resist” theme used in protest of the border wall in February 2019. Prof. Gaiter noted that protest signs are important not only to be visually accessible to those seeing the protests through media coverage but also as something for the protestors to literally hold on to.

There were many chuckles from the audience when Prof. Gaiter observed that “conservatism seems to be incongruous with creativity.” She showed signs with very traditional design from conservative gatherings. She concluded that “there is nothing wrong typographically, it’s just not interesting.” She mused that it may be that innovative design would signal change, which is not desirable for these groups.

Lastly, Prof. Gaiter focused on “resistance” by sharing her in-depth research on the artist Emery Douglas, who worked for the Black Panther Party from 1967–1980. Before Douglas got involved, the Black Panthers published a newspaper with a very “DIY sensibility.” Douglas told the party he could make it look better—and he did; circulation jumped to 100,000 copies every week! Douglas’ images countered the idea of Black assimilation as could be seen in wide circulation Black publications during this time period, by capturing the power and the humanity of all those he depicted, focusing on people living in poverty. He showed their humanity in such a way that the viewer didn’t feel sorry for them, but “wanted to talk to them and know their plans for the future.”

Prof. Gaiter concluded that we don’t know what will happen with print, but the prediction that it will go away does not seem to be true. Human contact with what we are reading is still important to us. Ultimately, we need to think about the implications of what is being made. Who is being included? Who is being left out? Whose story is being told? How can we come closer to some kind of truth?

Jae Jennifer Rossman is a Trustee of APHA. She is also the Director of the Department of Area Studies and Humanities Research Support at the Yale Library. Previously, she was head of The Bibliographical Press and Special Collections at the Yale Arts Library.