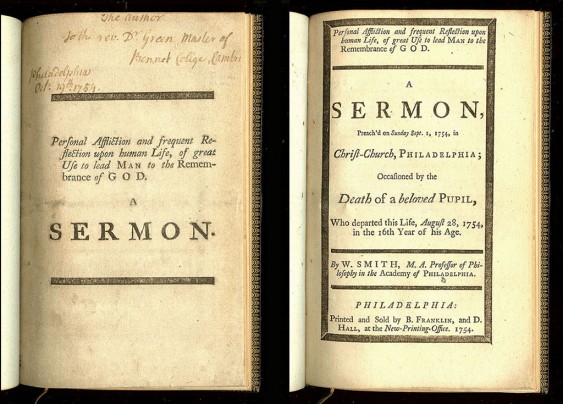 A Sermon Occasioned by the Death of a beloved Pupil by William Smith, Inscribed half-title (left) and title page with mourning border (right). Bridwell Library Special Collections, Perkins School of Theology, Southern Methodist University. Posted in honor of Franklin who was born January 17, 1706.

For many people, the most interesting rare books are those whose histories reveal authentic connections to known people, institutions, or events. One such book is Bridwell Library’s copy of a sermon printed in 1754 on the occasion of the death of a student at the Academy of Philadelphia, the first incarnation of what is today the University of Pennsylvania (my alma mater). It was printed by Benjamin Franklin (1706–1790), founder of the Academy, and inscribed by its author, Rev. William Smith (1727–1803), who soon became the first Provost of that Academy, for presentation to a fellow educator back in England. The inscription on the half-title page reads: “The Author / To the rev. Dr. Green Master of / Bennet College, Cambri[dge] / Philadelphia / Oct r. 19th. 1754.” A brief review of the circumstances surrounding this inscribed pamphlet reveals both an intriguing personal drama and early connections between academic life and the printing press in colonial America.

In 1751, William Smith, destined to become one of the founding fathers of American higher education, sailed from London to New York aboard the Angler. Born and educated in Aberdeen, Scotland, Smith came to the colonies in search of teaching opportunities, but his dream was to establish a new college for liberal education. In the mean time he became the tutor for the children of one of his co-travellers from England, the Honorable Josiah Martin, Esquire (1699–1778), President of the Royal Council of Antiqua in the British West Indies, who would settle in Rock Hall on Long Island and serve on the royal council of the Province of New York. During this time Smith devoted much original thought to the challenges of higher education. After writing two short articles on education, he published a pamphlet, A General Idea of the College of Mirania (New York: J. Parker and W. Weyman, 1753), in which he sketched out his principles and ideals for a mythical college, based on his experiences tutoring the Martin children.

In April 1753, Smith sent a copy of his pamphlet to Benjamin Franklin, the great American patriot, statesman, scientist, inventor, and printer, who at that time was also President of the Board of Trustees of the Academy and Charitable School in Philadelphia. Franklin and the trustees were deeply moved and impressed by the pamphlet. In June 1753, Smith visited Philadelphia in order to place two of his Long Island pupils, Josiah Martin, Jr. and William Thomas (Tom) Martin, as members of the Academy’s first graduating class. That October, Smith departed for England, where he was ordained as an Anglican priest in December 1753. Upon his return, further negotiations with Franklin led to Rev. Smith’s appointment as a professor of philosophy at the Academy, and on May 24 he was named first Provost of the soon-to-be chartered College of Philadelphia, an expansion of the Academy that was designed largely upon the ideals he had espoused in his Mirania pamphlet.

Tragedy struck on August 28, 1754, when Smith’s student, Tom Martin, “almost sixteen,” died in Philadelphia after a brief illness. Described by his former tutor as a “truly promising youth,” Tom had been enrolled in Smith’s senior philosophy class, and had wished to specialize in anatomy. Four days later, Smith preached a sermon in his memory at Philadelphia’s Christ Church. The sermon was published as: Personal Affliction and Frequent Reflection upon Human Life, of Great Use to Lead Man to the Remembrance of God. A Sermon, Preach’d on Sunday Sept. 1, 1754, in Christ-Church, Philadelphia; Occasioned by the Death of a Beloved Pupil, who Departed This Life, August 28, 1754, in the 16th Year of his Age. By W. Smith, M.A., Professor of Philosophy in the Academy of Philadelphia. Following tradition, the title was framed by a “mourning border” of thick black rules. Below the title was the imprint: “Philadelphia: Printed and Sold by B. Franklin, and D. Hall, at the New-Printing-Office, 1754.”

Rev. Smith’s sermon at Christ Church was not a eulogy of Tom Martin, but rather a meditation on the value of a pious life. Still, the preacher was moved to remember his young student as “my dear pupil,” who “fell in his bloom of youth, and, as I long loved, so must long remember him, with pious regard.” To the students he said “you all knew and loved him, and I beheld many of you bedewing his grave with becoming tears.” Finally, recalling his former employers, he lamented that “to be surprised with the news of his death before they heard of his sickness, must be a severe blow to the distant parents.” The sermon was well-received, and it inspired at least five poems written in response by fellow students, friends, and tutors, which were printed along with the sermon. One of these poems was by Tom Martin’s classmate, Francis Hopkinson (1737–1791), who in 1776 would sign the Declaration of Independence as a representative of New Jersey. The Pennsylvania Gazette also commented on the sermon on September 5: “As the preacher seem’d sensibly touch’d with his subject, and was known to have loved the Deceased, who had grown up under him for several years, and was a Plant reared by his own Hand, the Discourse had a very great effect upon the Audience. It is now in the Press by the particular desire and Advice of some who heard it, and will be published about the Middle of next week.”

Bridwell Library’s copy of the 1754 Franklin edition of Rev. Smith’s sermon reveals an authentic connection to the main protagonist of this story. It was a presentation copy inscribed by the author for the Rev. John Green (1706–1779), D.D., since 1750 the Master of Bennet College at Cambridge University in England, who became Dean of Lincoln Cathedral in 1756 and from 1761 was Bishop of Lincoln. It is not known how he and Smith became acquainted. Another presentation copy of the same sermon, addressed by Rev. Smith to Miss [Rebecca] Moore (d. 1793), his future wife, is in the Curtis Collection of Franklin imprints at the University of Pennsylvania.

Destined to be remembered as one of the founding fathers of American higher education, the author of this sermon was given honorary degrees of Doctor of Divinity from Oxford and the University of Aberdeen in 1759, and from Dublin University in 1763. In addition to being named the first Provost of the College and Academy of Philadelphia, he later became the first President of Washington College, Maryland, as well as Secretary of the American Philosophical Society. Suspected of Royalist leanings during the Revolutionary War, and intolerant of Quakers, Rev. Smith had a falling out with Franklin and endured several other controversies, yet remained for thirty-seven years the Provost or Officer of the Trustees of the institution that in 1791 became the University of Pennsylvania.

The publisher of the first edition of the sermon, Benjamin Franklin, would of course become a co-author, reviser, and signer of the Declaration of Independence. But in 1754 he was still known to most Americans as the printer of Poor Richard’s Almanack and The Pennsylvania Gazette. Having converted his printing business into a partnership with David Hall in 1748, Franklin no longer took an active part in the workshop itself, but he would retain an editorial and business interest in this publishing partnership until its dissolution in 1766. Franklin in 1754 was also very much a man concerned with the establishment of a successful academy for higher education in Philadelphia, and with the welfare of its students. To these ends, he had recruited Rev. Smith for its faculty, and put his printing press at Smith’s disposal to honor the memory of a “beloved pupil.” No other printed document related to the history of the University of Pennsylvania so intimately connects that institution’s earliest faculty and student body to the guiding actions of its visionary founder.

Thomas Harrison Montgomery, A History of the University of Pennsylvania: From Its Foundation to A. D. 1770; Including Biographical Sketches of the Trustees, Faculty, the First Alumni and Others (Philadelphia: George W. Jacobs & Company, 1900).

Horace Wemyss Smith, Life and Correspondence of the Rev. William Smith, D. D.: First Provost of the College and Academy of Philadelphia […] with Copious Extracts from His Writings, 2 vols. (Philadelphia: Ferguson Bros. & Company, 1880).

Eric White is the Curator of Rare Books at Princeton University’s Firestone Library. He came to this position in Fall 2015 with 18 years of experience as Curator of Special Collections at Southern Methodist University’s Bridwell Library. His research interests center on the earliest European typography, and he has published articles in this field in Gutenberg-Jahrbuch, The Book Collector, Quaerendo, and the Transactions of the Cambridge Bibliographical Society. He is currently finishing a major book project, Editio princeps: A History of the Gutenberg Bible, which traces the fortunes of all of the surviving copies, with particular emphasis on their rediscovery in monastic contexts during the eighteenth century.

Master & Pupil: A Rare Textbook Used at the University of Padua in 1486 by Eric White. “It is a commonplace in book history that early typography often served the purposes of the major universities, whose administrations and faculty quickly took advantage…”

Nick Sherman on William Page’s Magnum Opus of Multi-Color Typeface Design by Jane Rodgers Siegel. “Everyone loves the Page chromatic type specimen (1874), but it seems that no one loves it more than Nick Sherman, a digital type guy by…”

ISO: William S. Dorr, NYC printer ca. 1833 by Site Visitor. “Via the contact form: I am writing my dissertation on the printing enterprise of the American Anti-Slavery Society, 1833-1840, and am trying to find information…”