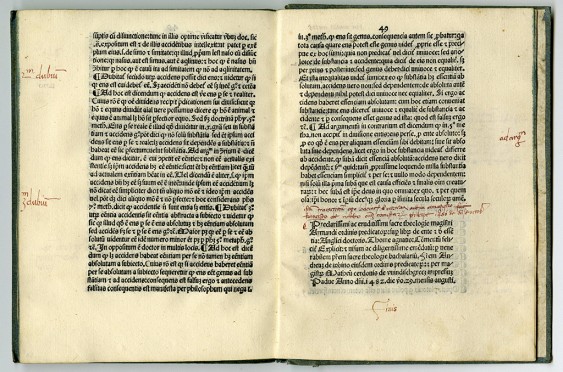 It is a commonplace in book history that early typography often served the purposes of the major universities, whose administrations and faculty quickly took advantage of the new printing press technology to supply books for its students. However, it is extremely unusual to find a copy of a fifteenth-century printed book that can be associated with a particular student enrolled during a particular academic term at a particular university within a particular class taught by a particular professor.

Precisely this information is provided for a remarkable book that recently came to my attention in Bridwell Library at Southern Methodist University in Dallas: Armandus de Bellovisu’s Expositio super Thomae de Aquino libellum de ente et essentia, published in Padua by Matthaeus Cerdonis on 29 August 1482 (Goff A-1059).1 This small quarto of 54 leaves, an exposition on Thomas Aquinas’ tract “On Being and Essence” (ca. 1255), was annotated throughout by several hands. One of the annotators, working with dark red ink, identified himself as Lodovicus de Cararia in a two-line Latin inscription at the end of the text. He further noted that he was a pupil of Master Francisco de Nardo, whom he praised as “omnium tomistarum principe” (prince of all Thomist scholars); the inscription is dated October, 1486.

Lodovicus de Cararia’s enrollment at the University of Padua during the 1480s is independently documented.2 He appears to have distinguished himself at the University of Padua, as a professor of medicine by the name of Lodovicus de Cararia is listed there in 1520. We may presume that the student’s instructor in Thomist philosophy during the fall term of 1486 was Franciscus de Neritono (†1489), also known as Franciscus de Nardo, a Dominican friar and faculty member at the University of Padua who had served as editor for at least three incunable texts, including the first edition of Thomas Aquinas, Summa theologica, pars prima, published in Padua by Albertus de Stendal on 5 October 1473 (Goff T-197). Neritono’s scholarly career would seem to have inspired his student’s admiration and the honorific title “omnium tomistarum principe.”

The 1482 Matthaeus Cerdonis edition of Bellovisu’s Expositio super Thomae de Aquino libellum de ente et essentia, one of the printer’s first works, is notable perhaps only for its somewhat rushed type composition. The lineation of the pages is inconsistent, the folios are skip-numbered, and two lines at the bottom of the unnumbered f. [14] verso, omitted by mistake, had to be supplied in manuscript for each copy by a scribe working in the printer’s shop.3 The evidence of colophons in works printed by Matthaeus Cerdonis suggest something of his hectic printing schedule: he published the Pythagoras, Ludus (Goff P-1146), a quarto of nine leaves, on 21 August 1482; eight days later the present work by Bellovisu, consisting of 54 leaves, was completed; one day later, on 30 August 1482, his press completed an eight-leaf quarto by Nicolaus, Episcopus Modrusiensis (Bishop of Modruš), Oratio in funere Petri Cardinalis S. Sixti (Goff N-51). One wonders whether the Thomist text by Bellovisu was rushed through the press in order to supply copies for students during a fast approaching academic term at the University of Padua. Four years later, it had found its way into the hands of a particularly engaged student.

Eric White is the Curator of Rare Books at Princeton University’s Firestone Library. He came to this position in Fall 2015 with 18 years of experience as Curator of Special Collections at Southern Methodist University’s Bridwell Library. His research interests center on the earliest European typography, and he has published articles in this field in Gutenberg-Jahrbuch, The Book Collector, Quaerendo, and the Transactions of the Cambridge Bibliographical Society. He is currently finishing a major book project, Editio princeps: A History of the Gutenberg Bible, which traces the fortunes of all of the surviving copies, with particular emphasis on their rediscovery in monastic contexts during the eighteenth century.

Penn Connections: Provost William Smith’s Sermon on “the Death of a Beloved Pupil,” Printed by Ben Franklin in 1754 by Eric White. “For many people, the most interesting rare books are those whose histories reveal authentic connections to known people, institutions, or events. One such book is…”