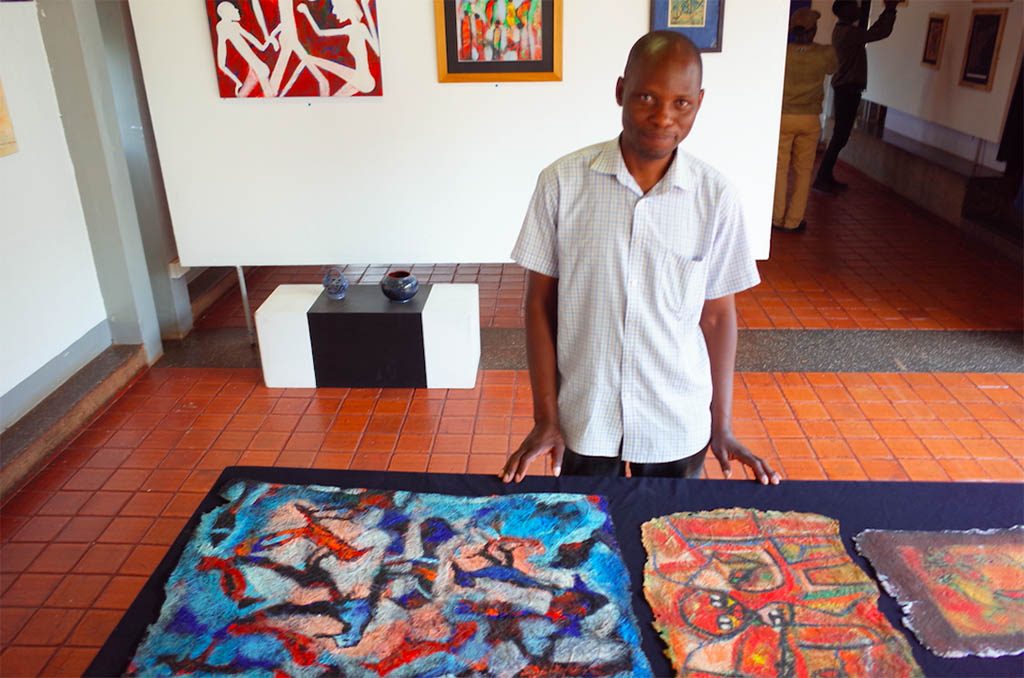 Mathias Tusiime with some of his woodcuts on his handmade paper. (Casey Smith)

Sat., Oct. 26 | Casey Smith presented on his month-long trip to Kampala, Uganda as part of a cultural immersion program for artists through apexart. He explored the city and prestigious Makerere University in particular, where he learned about their printmaking techniques using hand-registered woodcuts on MDF. As Smith showed photos of the woodcuts (both blocks and prints), he pointed out that they typically depict domestic life or political subject matter.

Smith went on the discuss the community-building work of Mathias Tusiime and Raymond Nsereko, co-founders of a non-profit art education initiative, Uganda Community Art Skills Development, and Recycling, or UCASDR. Tusiime is an artist and educator who met Nsereko at Makerere University, where they both work and teach. Tusiime is a staff member and Nsereko is on the faculty. UCASDR was formed in 2012 and has introduced sustainable art practices to thousands of children who otherwise would have no access to art-making. Their work is changing lives every day.

Smith described the paper they use, explaining that because Tusiime makes it from local plants that are abundant and free, it is less flexible than we’re used to and more like canvas. He concluded by expressing his admiration for Tusiime’s work and UCASDR’s mission, which he hopes to support through the sales of posters that he’s created.

Mia D’Avanza is Head of Circulation at the New York Society Library and a visual artist. Her research interests include the history of the book and printing, natural history, and modern and contemporary art. She is co-editor and contributor to Frida Kahlo’s Garden, the catalog accompanying The New York Botanical Garden's 2015 exhibition FRIDA KAHLO: Art, Garden, Life.

Pyramid Atlantic Tour & Letterpress Workshop by Melanie Leung. “Sun., Oct. 27  | Pyramid Atlantic is located in the Gateway Arts District in Hyattsville, Maryland.  It occupies a space that has had several previous…”

Summary of 2019 Lieberman Lecture/APHA Conference Keynote Address by Colette Gaiter by Jae Jennifer Rossman. “Fri., Oct. 25 |   “Outside in: image and words of assimilation and resistance in American print history” by Colette Gaiter, Professor, Art & Design and…”