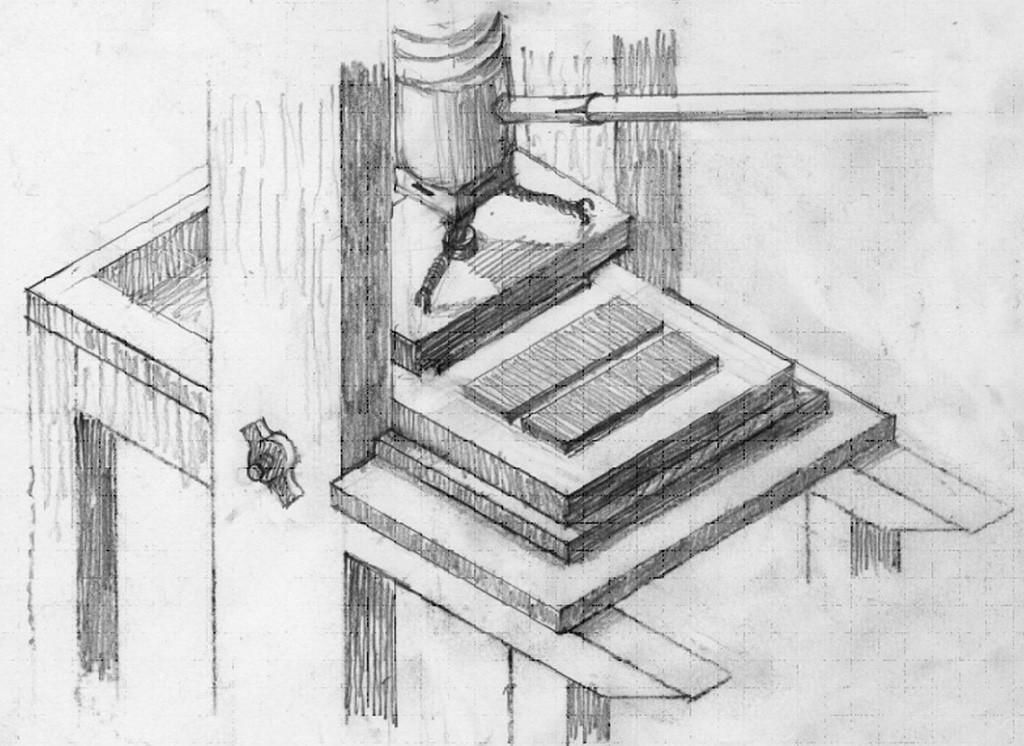 Position of the forme for the first pull, tympans and frisket omitted for clarity.

Richard Lawrence: “A New Wooden Press for Everyone to Try: The Dürer Press”  ¶ Stan Nelson: “Printer’s Ink Balls: Their History and Use”

Alix Christie’s keynote lecture on her book Gutenberg’s Apprentice whet the appetite of conference attendees for clues about the mysteries of the master’s craft in its early years, and papers by Richard Lawrence and Stan Nelson did not disappoint. Their talks about the reconstruction of a historically accurate wooden press with wooden screw and the evolution of ink ball design offered superb details for those with a close interest in printing practices and experiential education.

Scholar-craftsmen who share their research and the secrets of trades past have become all the more important since the closing of the St. Bride Foundation workshop recently and, some years ago, reformulation of displays in the Smithsonian’s Hall of Graphic Arts. Lawrence and Nelson have been closely associated with these institutions, and their talks were a reminder that personnel and artifacts are vital resources for scholarship and education.

Richard Lawrence has brought his experience in printing since the 1970s and formal studies in printing history to his role providing historical printing demonstrations at St. Bride Foundation and his own workshop. His talk on the fabrication of an early common press replica currently housed at St. Bride.

Such presses are essential to understanding technological developments and the process of innovation, in Gutenberg’s time as well as in our own. As a member of the Dürer Group, he and colleagues Claire Bolton, David Bolton, Ben Weiner and Andrew Dolinksi teamed up with Alan May to provide printing historians with the opportunity to test their assumptions about printing in Gutenberg’s era.

Projects to reconstruct historical technologies are vital for injecting accuracy into historical analysis, especially where other evidence is scarce. As Lawrence noted, “If you want to come up with theories about how things might have been done, it’s incumbent upon you to see whether it could be done.”

Further, what might be possible could well lack feasibility for everyday practice calling for use hundreds of times in a work period. Documentation and reconstruction facilitate practice and experimentation. Putting a theory into practice produces important evidence about wear and tear on materials that can make one go back to do more research and analysis. “Actually building a press is a great test of theory,” he remarked.

Determining the precise design of Gutenberg’s press has proven elusive, although Alan May certainly can lay claim to having come closest (so far) in recovering likely details about the press and its operation. Working under commission from the Dürer Group, May fabricated a flexibly configured wooden press capable of one-pull or two-pull working, with adjustments of long rods and an extension. Coming after the success of May’s fabrication of a potential Gutenberg model, the Dürer press embodies multiple possibilities, enabling the St. Bride Foundation by arrangement with the Dürer Group to be home to technological transition in practice.

The process of making a press is valuable as research, and experiential learning furthers unique knowledge, Lawrence remarked in relating Alan May’s analysis to the audience. There is much yet to be learned about how printing has been undertaken in the past. Historical practice provides insight into how early printers actually worked, but key processes such as registration are still unknown.

May’s research into early printed works by Gutenberg, his knowledge of technical processes, and close scrutiny of a 1511 Dürer illustration provided design influence on the project. May inspected and culled facts from sources, reading processes from subtle arrangements of print or conflicting styles. The Dürer drawing, for instance, presented a press with its screw and cheeks contrary to working design principles. Lawrence argued that the illustration, drawn into a letter sent to one of Dürer’s friends, presented valuable evidence and suggested a transition between one- and two-pull presses.

With “lovely supplies of kiln dried oak” and May’s experience cutting the thread and nut through hard wood, the project came together, with the majority of the press accomplished with standard machining. Whether to hold the platen while printing was resolved by adding a till. Other correspondence in the late fifteen century suggested a metal platen, which was loosely attached in the new reconstruction. The entire machine could be assembled in just 45 minutes on site at St. Bride—with a bit of practice—to produce a sturdy machine that works “Very nicely,” assured Lawrence. A large run awaits. 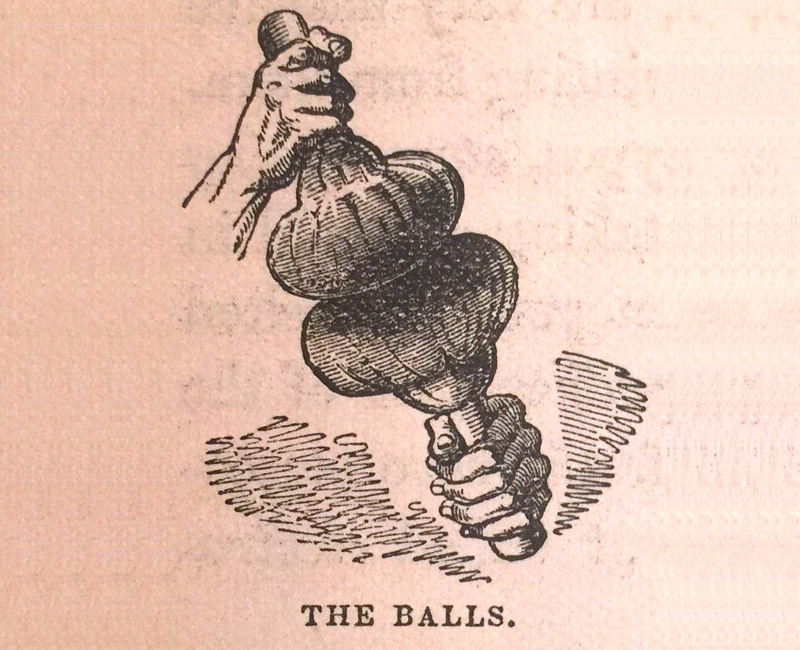 Distributing ink upon ink balls, as envisioned by an illustrator. The Harper Establishment: How Books Are Made by Jacob Abbott, New York, 1855.

A press for ordinary work is of little use without ink, and Stan Nelson has applied his attention to this neglected area of printing demonstration technique, with excellent results. Nelson’s presentation offered details that, if published, will become a standard reference for the history of printing.

Nelson’s expertise in historical printing techniques is widely known from his career at the Smithsonian Institute and National Museum of American History’s Hall of Graphic Arts. As Museum Specialist Emeritus, he continues expanding his knowledge of design and craft related to the era of the hand press, frequently consulting with fabricators and educators about materials and practices.

Fabricating historical presses and ancillary equipment is a collaborative activity, requiring expertise from a range of specialists. Nelson acknowledged several with whom he worked closely in gaining and expanding his knowledge about ink balls: Gary Gregory, a master printer of the Printing Office of Edes & Gill; James Walczak, whose woodturning expertise has been instrumental in developing an understanding of ball stock design and production; and Peter Stinely, master printer at Colonial Williamsburg, who gave Nelson significant assistance regarding leather samples and preparing ink balls.

It seems counterintuitive that so many years of experience would be necessary for learning the secrets of an inking instrument common in print shops for several centuries. What is commonplace is most easily forgotten, however, and it turns out that ink balls have their history, too.

We no longer have butchers down the street selling fresh animal skins or chamber pots at the ready to provide urine for soaking pelts. Those who have undertaken historical printing have often made do with tanned leather more suited for book binding or with “faire water,” on the latter trusting Moxon’s admonition that pelts could be kept supple between work shifts in a somewhat more pleasant manner.

Stan Nelson introduced the audience to the daily life of an apprentice, with all its nasty characteristics, poetically narrating the lowly craft at the heart of a good print: preparation of ink balls. Soaking in chamber lye, then washing, squeezing, scraping in the morning and before afternoon printing. Stuffing the ball stock with wool, tugging and tacking skin against wood. Taking up a ball knife to apply ink, then grasping the cups of each stock with a firm hand to punch and roll the inky surfaces together and apart. To an experienced worker, the snap of good ink on well-prepared ink balls offers every bit as much information as the sight of even black across the skins on each stock. These bits of satisfaction are real, even as details of the task sometimes give one pause about thinking too highly of the printer’s craft.

Nelson has recovered unusual instances of surviving ball stock cups to support his research. More often, the frequency of work left little physical evidence as materials disintegrated. Nailing skins to stock and plucking out nails at least twice a day reduced skin edges to tatters and hashed wood stocks that were soft enough to be readily pierced by tacks.

Ink balls maintained core similarities for hundreds of years, with local variation. Design changes from the fifteenth to the mid-sixteenth century produced a standard form persisting until the development of composition rollers in the nineteenth century. However, illustrations from the 1499 Danse Macabre and other later images suggest small innovations. Specifications for wood turning, proper stuffing and the affixing of skin to stock changed somewhat in different places and eras.

Nelson showed a number of illustrations that traced varying approaches. Ball stock cups that resembled sloped reservoirs took on a beehive shape by the time of Diderot’s Encyclopédie of the eighteenth century, with skins stuffed not into mounds but fat elliptical balls. The greater hollow allowed more wool to be pressed beneath the skin. He showed an illustration of leather wrapped upward to a stock’s handle, contrasting with another secured to cups.

Moxon’s description in the 1680s of ball stocks manufactured from alder or maple declared the hollow necessary for maintaining plump wool under the skin. His requirement of the proper cup diameter narrowed from 7″ to 6″ over time, according to Nelson.

Having worked with stocks turned from distinct woods and slightly different sizes, Nelson has compiled important details about these changes, enabling him to advise on era-specific printing and replication of historical equipment, inasmuch as knowing such things is possible. His research and experience have informed specifications for equipment used in historical press demonstrations at University of Virginia’s Rare Book School and other institutions.

Nelson offered in-person demonstration of the speed, motion and pattern of application of ink with ink balls of his own manufacture, as well as commentary and examples of coverings, packing and nails.

A brisk question-and-answer session followed each presentation, with audience members greatly interested in publication of diagrams for replicating the projects. Lawrence suggested that information for building a similar press might be possible to acquire upon request from his collaborator, and Nelson’s presentation provided numerous specifics that are second only to his on-site consultation for such projects.