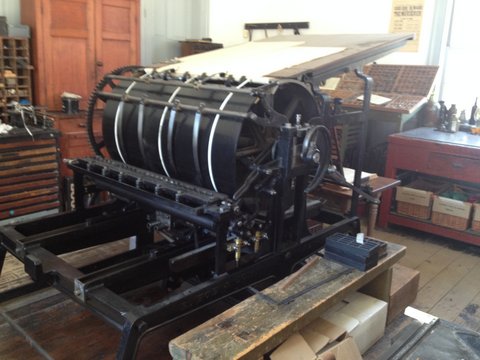 Stephen Sword: “Skills and Mechanization: The Transition from Hand Press to Cylinder” ¶ Jeff Pulaski: “After the Iron Press: The Grasshopper”

Technological change has no natural imperative, regardless of how logical such shifts might seem in hindsight. The time and place must provide a foothold, with securement facilitated rather than assured. Presentations by Stephen Sword and Jeff Pulaski conveyed a firm sense of the role of flesh-and-blood printers in the adoption of cylinder and country press designs in the nineteenth century.

Stephen Sword shifted the conference’s Track 2 of “Heavy Metal Hardware & Technology” from early printing to the industrial era, highlighting the adaptation that enabled transitional cylinder designs to be considered successful. He identified R. Hoe & Company’s single large-cylinder hand-printing press as a crucial link between the two eras in the United States.

Sword’s talk, “Skills and Mechanization: The Transition from Hand Press to Cylinder,” laid out his own learning process for understanding how individuals applied their craft skills to the cylinder press. Inking and impression, especially changed with the introduction of Hoe’s 1840s cylinder press design necessitating new roles and work processes.

He explained his method as a printing historian as a search for accurate inferences, extrapolating from his own experiences back to the nineteenth century. Sword has gained the right kind of hands-on knowledge so as to avoid too easily assuming that the past is a familiar place. Through his work at Stiff ‘n’ Sore Press in Stouffville, Ontario, and demonstrations at various printing-related events, Sword has earned a reputation for his quick setting of type by hand and historical presswork. He is deeply involved in the communities of Black Creek and Lang Pioneer Villages and of the University of Toronto’s Massey College Bibliography Room.

Meeting Ray Redmayne at Black Creek Pioneer Village in Toronto made it possible for him to learn the intricacies of an 1862 Hoe cylinder press identical to the 1845 by Hoe (itself based on the Napier design). Sword came to his current stance after a journey that began as “tinkering with toys with no knowledge,” increasing from an early foundation in typography and type design to the independent study of printing history. As he visited museums that tended toward newspaper printing narratives, he found himself somewhat resistant to motorized equipment. He wondered whether nineteenth century craftsmen who gained entry to the trade on hand presses felt a sense of loss when presented with machinery that automated their tasks, and his research has explored that possibility.

Working with Redmayne, a retired printer reconstructing Black Creek’s 1862 Hoe, taught Sword about the processes by which parts could be identified as needing replacement, oiling instructions interpreted, and variations between hand and machine operations reconciled. After being permitted to run the press, Sword came to appreciate the role of hand-press printers in cushioning the introduction of a new technology.

From calculating the load-bearing capacity for flooring to hoisting a 700-pound cylinder onto a press, many unexplained but essential requirements for assembling and operating a hand-cranked cylinder press were left for nineteenth century hand-press printers to puzzle out. Identifying more than two dozen oiling points across the press was one thing, but figuring out a new labor process and one’s place in it was quite another, he noted. Without the good fortune of a Hoe agent nearby for assistance, such things were left to recipients to figure out.

Achieving 800 impressions an hour required careful make ready and inking adjustments, as well as splitting labor into separate cranking and feeding positions. Sword’s comment that operators manually set rollers at height for each job helps to confirm this reviewer’s association of slurred type adhering to imposition patterns with low-level cylinder press printing of that era. His presentation gave numerous details about press operation that will combine well with research on other transitional designs, such as the Adams Power Press. His work is a welcome addition to mid nineteenth century printing history. 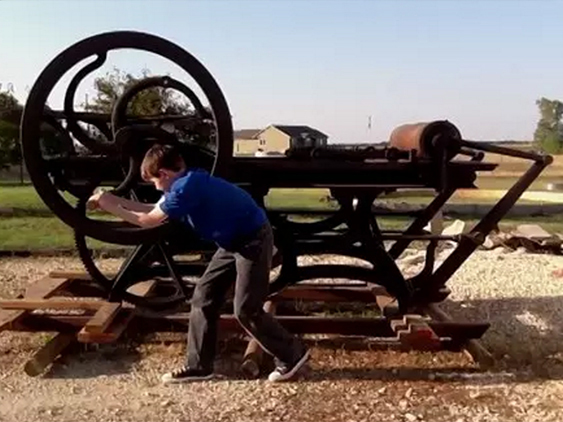 A circa 1880s Prouty “Grasshopper” in mid-restoration in Wichita, Kansas makes good use of child labor. (Jeff Pulaski)

Jeff Pulaski took on the study of a press intriguingly matched in its design to rural life and publisher needs. Pulaski’s presentation, “After the Iron Press: The Grasshopper,” documented a press that backtracked from trends toward heavier and faster cylinder presses in the nineteenth century. He is an associate professor at Wichita State University, teaching graphic arts and collecting letterpress equipment, including the Prouty Power Press.

Enoch Prouty opposed vices such as playing cards, theatre and the circus, and he wished to contribute to moral reform by publishing a temperance newspaper. A machinist who had become ordained as a Baptist minister in 1870, he possessed the mechanical aptitude and the reform fervor to enable him to publish a weekly with a circulation of 250. The venture taught him that the weight and complexity of new cylinder presses restricted publishing in his area.

He set about initiating his own design, receiving the first patent in 1878, with improved patents in 1881 and 1885. The inventor arranged with a fellow Baptist for production, and D.G. Walker & Company of Madison, WI, manufactured the machine under his direction.

The Prouty Power Press had a distinctive design and motion, readily standing out from other machines. A pair of slotted bars jutted up and down to move the cylinder across the frame, mimicking the motion of a long-legged farm insect so well that the machine became known as “the Grasshopper.” Pulaski integrated a video of the machine in action into his presentation, with the bars’ movement uncanny in its resemblance to an insect form. The video, which includes a size comparison to a compact car and demonstration of the hand crank, can be seen at: https://vimeo.com/55680855.

Prouty sought and received publicity for the press, with one notable instance of a New Zealand newspaper reporting that the inventor’s own trained dog could operate the Grasshopper. Models weighed 3,000-4,200 pounds, and Pulaski commented that testimonials in advertisements established a comparison with country publishers using hand presses (presumably iron). Producing about 300 impressions an hour, the Grasshopper offered no advantage to those who required volume production and had ready cash, but small-circulation papers benefitted from its hand-cranked mechanism. Although not emphasized in the presentation, the Prouty machine was cheaper than cylinder presses of the day, capturing a mid-market niche between hand press and most cylinders.

Having turned to newspapers for marketing and a minister mixing business with his religious connections, Prouty suffered a degree of notoriety when he abandoned his wife for another woman. He removed to Chicago and continued making patentable incremental improvements to a variety of devices well beyond printing presses, marrying Olive, his beau and a technical helpmeet. She became the first woman sharing credit for a typewriter patent, according to Pulaski.

Presses larger than a hand press or a jobbing platen rarely find a home in most working printing museums. Pulaski has a growing collection of printing presses and equipment, and he expressed profuse appreciation to his wife for allowing him to acquire, move and renovate a Grasshopper, so as better to study its mechanisms. Both speakers showed strong evidence of technical capacity and research, with a post-presentation discussion about reproduction of rollers from materials procurable at a hardware store and precise questions about press capabilities engaging numerous audience members well after the conclusion of the panel.