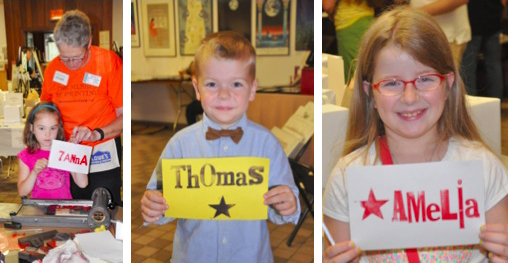 The Museum of Printing in Massachusetts introduces letterpress and other printing crafts to people of all ages while maintaining its primary mission of preserving the rich history of the graphic arts. (Frank Romano)

Frank Romano  began his session by showing a humorous video of the “Short History of Printing,” in which Romano himself has been green-screened into paintings and early engravings portraying craftsmen and printers at work—including a stiff and rather one-sided conversation with a “flat” Gutenberg.

Following the video, Romano spoke in his signature style: energetically, quickly, confidently, and casually. Segueing into a brief history of the Museum of Printing—reopening in Spring 2016 in its new Haverhill, Massachusetts location—he touched on all aspects of it, including highlights of its collection, new acquisitions, and a description of the various groups that visit, from those with an interest in printing (the Wood Engravers Network and the American Typecasting Fellowship), to those merely stopping in for a tour (the Red Hat Ladies and seniors groups on an outing), in addition to visits by all manner of ages and education levels. An emphasis was made on the Museum’s involvement in the community at large, with a significant portion of his slides being photographs from the Museum’s annual Printers’ Fair, which has activities for all ages. The mission of the Museum is an obvious labor of love for Frank, and for the staff and volunteers of the Museum.

He completed his talk with quick stories of his recent exploits in printing: being a printing expert to the media, and also about acquisitions of printing equipment of note by other printing museums. With the handpress on everyone’s mind for this year’s conference, a chorus of “oooh”s came from the crowd when shown a photograph from Howard Iron Works, an Ontario-based printing museum and restoration facility): a long line of over two-dozen freshly restored and painted iron handpresses, including several Columbians.

A lively bonus to the talk was Romano’s banter with Herbert Johnson, fellow RIT Professor Emeritus, sitting in the front row. Throwing out a question to the crowd, Romano asked, “Who invented lowercase?” Receiving no response, he enthusiastically gestured for answers. Still receiving none, he yells out “Charlemagne!” This receives audible, but playful grumbles from the crowd—including from Johnson: “Herb disagrees—but Herb disagrees with everything I say.”

Romano ended his presentation by thanking the audience for its attention, which he certainly had. 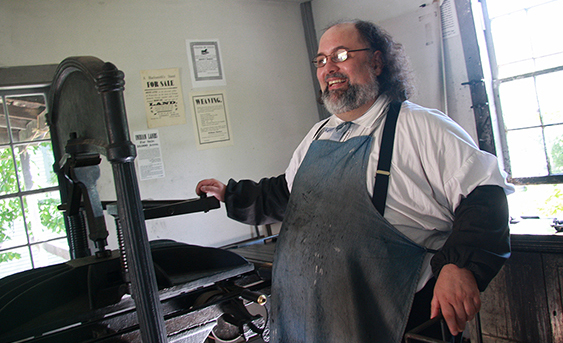 Dressed in braces and and a collarless-shirt for his presentation, David Damico’s mid-nineteenth century attire was out of place for the modern interiors of the RIT campus, but is daily wear at the Genesee Country Village and Museum, in Mumford, New York, a living history museum where Damico is the resident printer and historical interepreter for the Print Office. Genesee Country Village spans the years between 1795 to 1920, but the Print Office, a three-room building—originally two separate buildings built in the early nineteenth century—is located in the Antebellum Village (1830-1870), where the 1848 Washington iron handpress Damico prints on during his summer work there fits right in.

Damico spoke about various aspects and challenges of being the village printer at a living history museum, including working by candlelight only, and the how weather conditions can affect the functions of printing and the handpress within a non-weatherized building. He enthusiastically discussed a large part of his work that a typical job printer doesn’t face, then or now: taking many questions from the visitors who walk through the Print Office, from the obvious to the arcane. But rather than be frustrated by the interruptions of printing a “job,” this is obviously what Damico enjoys about the work at the village—answering questions, and filling in gaps of knowledge about the craft at that time for both the curious young and old.

Joshua G. Steward is an Editorial and Publishing Assistant at the University of Tampa Press, a Studio Associate at the Tampa Book Arts Studio, and is a Docent and Historic Interpreter for the Print Shop for Cracker Country, a turn-of-the-century, rural Florida-focused living history museum. His letterpress experience and education includes an internship at Yee-Haw Industrial Letterpress in Knoxville, Tennessee, as well as being a "graduate" of Rich Hopkins' Monotype University. He maintains a design and letterpress studio in St. Petersburg, Florida.