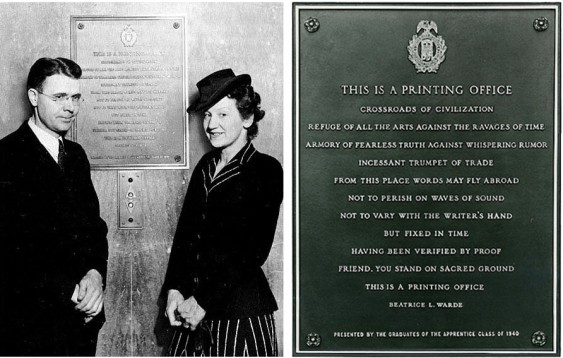 Mortimer and Warde posed in front of the plaque bearing Warde’s text, which still greets visitors in the lobby of the Government Publishing Office in Washington, DC. (GPO)

Some time ago, I stumbled across a photo on the Internet of Beatrice Warde, the famed typographic publicist and writer, posed in front of the “This is a Printing Office” plaque in the lobby of the Government Publishing Office in Washington, DC. She is standing with GPO’s longtime director of typography, Frank H. Mortimer. The photo caught my attention for a couple of reasons, and sent me off down a couple of interesting paths.

For those who don’t know about her, Beatrice Lamberton Warde, neé Becker, was an American, born in 1900, daughter of a musician father and journalist mother who also wrote books for young readers. Beatrice married the book and type designer Frederic Warde in 1922, and after a stint working for Henry Lewis Bullen in the library of the American Type Founders Co., she and Frederic left for England in 1925 and Beatrice, writing as “Paul Beaujon” began to publish articles on typography. She and Frederic divorced a few years later. She was hired by Stanley Morrison to edit The Monotype Recorder, the magazine of the (English) Monotype Corporation, and eventually became the company’s publicist. She lived in England until her death in 1969.

The photo grabbed me first because it was new to me, even though the setting and subjects were immediately familiar. We know from an obituary notice that appeared in 1969 in GPO’s house newsletter Typeline that Beatrice was a “frequent visitor,” the last time in June, 1965. We have several photos that we can’t date absolutely authoritatively, although they’re probably 1950, when we know she visited. She poses in one shot in a very chic black dress and a quite exuberant hat with Public Printer John Deviny, who served from 1948 to 1953. The group shot from this series must illustrate what an awful lot of her career looked like: Beatrice at center surrounded by a mass of middle aged men. That photo was shot in the GPO Refectory, which was the executive dining room. There are assorted samples on the table in front of the group, and the only one we can positively identify is the Penguin Collected Poems of T.S. Eliot, which was published in 1948. One person is holding a book that may be about the London Underground, but there just isn’t any match to be made on it. It may be safe to assume that this is a selection of the books that were part of Books Across the Sea, a project that Warde and her mother, May Lamberton Becker, were movers and shakers in from its beginning at the start of the war, and which eventually became a part of the program of the English Speaking Union. 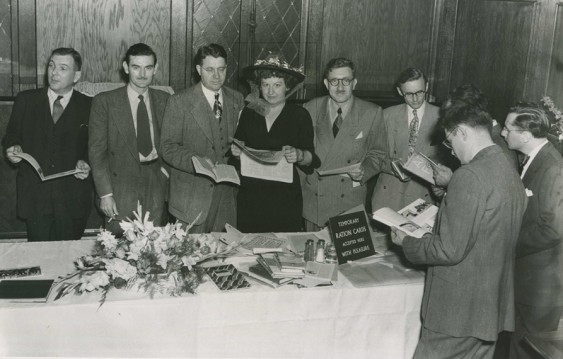 But the photo I came across is seemingly earlier. Beatrice wrote the “Crossroads of civilization …” text for a broadside for Monotype’s introduction of Eric Gill’s Perpetua type in in 1932. In the photo, Beatrice and Frank Mortimer are standing in front of the bronze plaque that the GPO apprentice class of 1940 placed when the new GPO building opened in 1940. In 1941 the Typophiles in New York published a little volume of Beatrice’s letters and other writings about the early days of the war in London called Bombed But Unbeaten. In one essay she writes about the text of the broadside, and her reaction on learning that the GPO apprentices were putting up the plaque: “… then came news from a remote planet (as it then was), the USA, that the inscription was to be cast in bronze and affixed to the wall of the GPO in Washington. There is something about the very words ‘cast in bronze’ that sends joyful shivers down any writer’s back.” The plaque remains in the same spot today.

This photo vexed me because of timing: We had no note at GPO of a visit before the war, and the clothing is seemingly not post-war, not to mention the fact that Beatrice and Frank Mortimer both look considerably younger than the ca. 1950 photos. Yet a visit between late 1940 and the end of the war just seemed unlikely, since it would have meant a trans-Atlantic voyage at a time when waters were not at their safest.

So I began looking around to see what I might find that would tell us something about Beatrice’s professional travels in this period. I discovered that a large body of her papers are at the University of Birmingham (UK), and they have produced a nice preliminary box list which is available online, in advance of full cataloging. Nothing in the box list provided me with anything definite (although there are some awfully tantalizing things listed).

I then looked at the Nicholas Barker biography of Stanley Morrison (a decidedly important figure in Beatrice’s professional and personal life). It seems that Beatrice did make a visit to America in 1942, which fits as far as the visible clues are concerned. Perhaps a look at the actual papers in Birmingham would provide a more definite answer, and so I suppose that trip goes on my retirement desiderata list.

Meanwhile, I have enough puzzle pieces to feel fairly certain about the date of the photo as 1942.