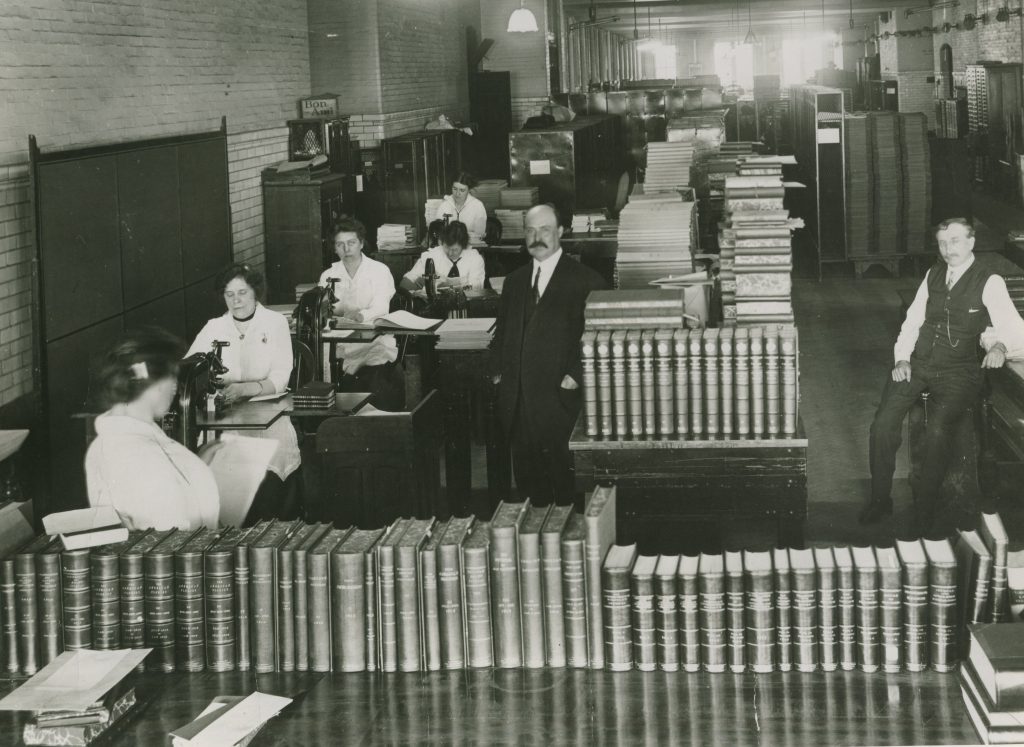 The following query appeared on this site recently:

Please, I would like to know the term used for the “thumb indents” found in older hardbound dictionaries, one at the start of each new letter. Also, was making these indents considered part of the binding process, and how was it accomplished?

The proper term is “thumb indexes” and there were, and are, machines that cut the indentations. A tab or label with the appropriate letter or title is then affixed. It is a bindery operation.

The U.S. Government Publishing Office (formerly the Government Printing Office), operated a mind-boggling array of equipment in the early twentieth-century. By 1942, GPO’s catalog of machinery listed eight indexing machines by three manufacturers. In the 1980 catalog, seven machines were listed, although some of those are for cutting strip indexes rather than thumb indexes. The photo above  shows workers in the Bindery operating indexing machines, about 1905.

GPO’s apprentice school published its own textbooks throughout most of the twentieth-century. The chapter “Miscellaneous: Rounding Corners, Indexing, Numbering ” in the textbook Theory and Practice of Bookbinding (1950) gives the following summary of fore edge indexing:

Three kinds of index are in general use. One is the cut-in or strip index, in which a strip is removed from the margin of the page leaving a portion of the margin upon which the index number or letter is printed. Another is the thumb index which is a semicircular indention cut in the page margins. Another is the tab index which consists of numbered or lettered tabs pasted to the page margins. Indexes for reference books usually are of the thumb or the tab variety, while account books generally have cut-in indexes or occasionally tab indexes.

To machine cut a cut-in index, the guide on the machine is set for the depth of the cut and the ratchet is set to space the divisions. The book is fastened in the clamp and the operator lets the pages fall on the cutting blade. As each division is cut, the machine shifts the book along for the next cut.

The cut-in index can be cut by hand also. The divisions are marked off on the pages and index shears are used to cut in at each division mark. Index shears are equipped with an adjustable gage to cut to the desired depth. A cutting zinc is inserted between the first and the second divisions. A straightedge and knife are used to cut parallel to the fore edge through the first division from the shear cut to the tail of the page. The other divisions are cut in the same manner. The letters are then marked on the divisions by hand with ink.An indexing roll with the alphabet on its edge should be used if much work of one size is to be indexed. The spacing between letters corresponds to the spacing between divisions of the index so that the entire index can be imprinted by running the roll along the index divisions. The cut-in index can be reinforced by means of a piece of heavy paper, cloth, or leather folded around that portion of the margin that carries the index letter. This should be done before the index Is cut so that the blade will cut the reinforcing material with the page.

The thumb index is cut with a semicircular cutter. One kind of cutter resembles a pair of pliers and is operated by hand, and another is operated by compressed air. The Index divisions are marked and the cutting plate is slipped between the pages on top of the first division page. The book is forced back so that the fore edge is at an angle and the thumb notch is cut. The division letters or numbers are stamped on semicircular pieces of reinforcing material such as cloth or leather, slightly larger than the thumb notch. They are pasted on the division pages directly under the notch, which may be colored by the use of edge colors applied with a small brush. If the book edges are to be marbled, the marbling should be applied before the index is cut.

Thumb indexes can be cut by hand by the use of a half-round chisel of the proper size. A piece of binder’s board for the chisel to cut against should be placed in the book at the division page. This is a slow process and is suitable only for occasional use.

Some of GPO’s fine work for Congress still requires thumb indexes. A hand-held device has replaced the large models in the photo. We produced a video about the binding of Jefferson’s Manual a few years ago, which walks through the process of binding an edition of the manual in leather, including the cutting of the thumb indexes. The link is to a short clip of that process.

History of Printing Timeline by Announcement. “APHA is developing a history of printing timeline and would like your help to improve it. In accord with our mission, it includes all related arts and…”

ISO: Steenland Lithography, Philadelphia by Site Visitor. “Via the contact form: I am researching a book, and one of the people in it closed out his career in the 1980s at Steenland…”

ISO: A Layman’s Book About the History of Printing by Site Visitor. “Via the contact form: I am at the Tubac Presidio State Park in Arizona. We have a chance to create a small exhibit on the…”

ISO: 19th Century Women Printers by Announcement. “From the contact form: Hi, I’m a doctoral student at Columbia University. I’m researching women printers and printers from minority backgrounds in the US and UK…”