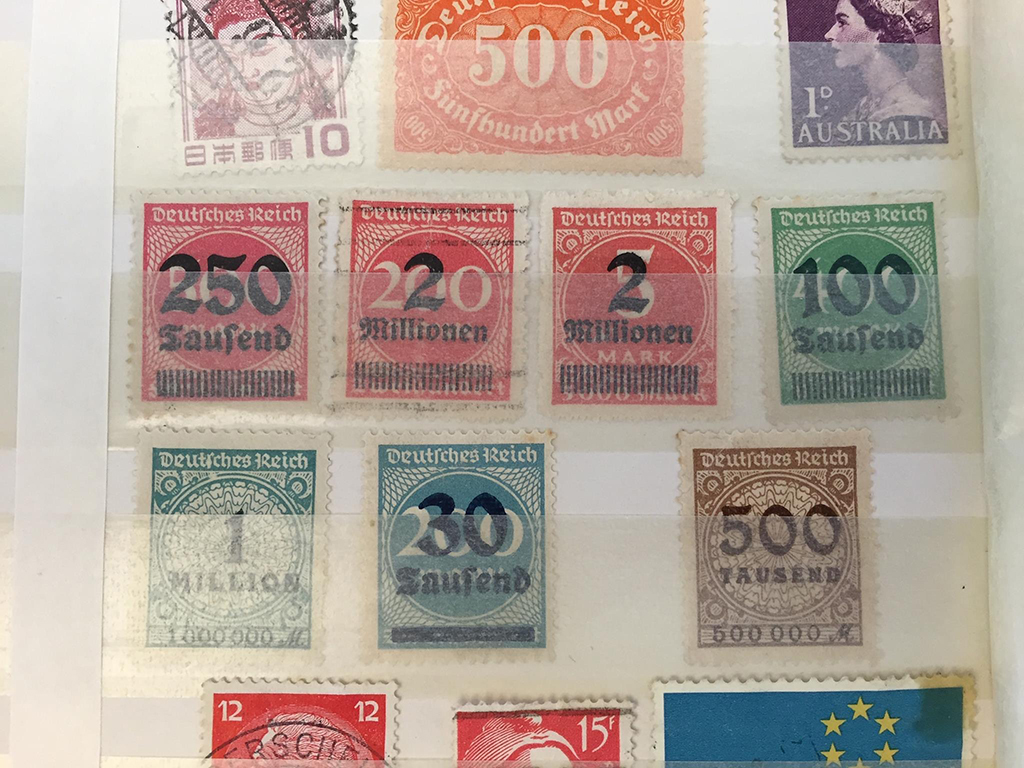 Overprinting on these stamps from the Weimar Republic reinforce the speed and severity of inflation in Germany. (Peter Crabbe)

Sat. Nov., 7 | On day three of Awayzgoose 12, Jim Moran sat down with Hamilton Wood Type & Printing Museum‘s Executive Director Peter Crabbe to discuss the museum’s future. Peter talked about the path that led to his role at Hamilton, from studying fine arts in Wales to designing exhibits for children’s museums in the United States to being captivated by Two Rivers, Wisconsin.

This is Peter’s second Wayzgoose, having joined the team at Hamilton shortly before Wayzgoose 11. He has spent the year transitioning to his role as executive director and working on the museum’s administrative infrastructure. Although the pandemic has disrupted the museum’s usual functioning, the team has been very busy working on improving the facilities, including fixing leaks and drafts. Both Jim & Peter mentioned that their usual cadre of volunteers have been sincerely missed during the pandemic. There will be much to look forward to when the museum can open again, including four recently acquired presses.

The museum’s team has worked to increase its virtual presence with Hamilton Hangs, regular Zoom gatherings where museum friends explore various printing topics. Wayzgoose has gone virtual this year, and its success means that there will be aspects that carry over when we can gather in person again.

At the conclusion of Peter’s interview, there was a surprise presentation by Richard Zauft. Richard introduced the newest font in the Type Legacy Collection. JB Moran Bros. was created by Zauft to honor the work the Jim Moran and Bill Moran, brothers who have a long commitment to the Hamilton Wood Type Museum.

Alison Newman is a librarian and archivist who calls Wisconsin home. She enjoys studying book and print history. Hamilton Wood Type & Printing Museum has and will continue to provide her many valued experiences and treasured moments during workshops, exhibits, & wayzgooses.