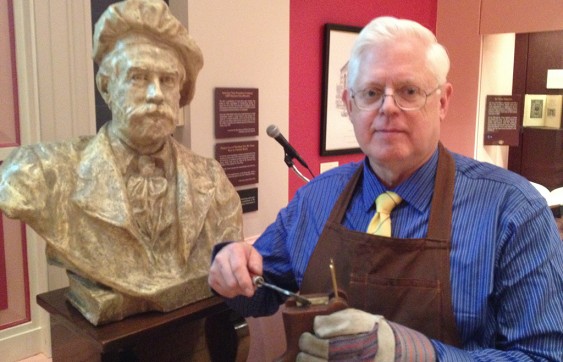 There was plenty of printing history all over town during the first few days of April. The main attraction was the New York Antiquarian Book Fair from the 3rd through the 6th. But there was also a demonstration at the Grolier Club by type historian Stan Nelson, timed to go with the De Vinne exhibit there, curated by Irene Tichenor [APHA president 1998–2002] and Michael Koenig. And then, for current practitioners and collectors of letterpress, there was a Fine Press Book Fair (sponsored by FPBA) at the Altman building on Saturday and Sunday.

Nelson [a former APHA trustee] had brought up just a few of his type moulds (the tool which holds the type matrix so that molten metal can be poured in to cast the letter for printing). I believe I heard him say that he has built moulds suitable for every major point size from 4 through 72 points. In any case, at the Grolier he cast both body-type sized letters and a few really big ones. He had a cute little electric pot along in which he heated his type metal, repeatedly reminding attendees to stand back. (No injuries were reported.) Among the attendees: type-design legend Sumner Stone, who happens to be in NYC teaching typography at Cooper Union.

The demonstration was held in the ground floor exhibit room at Grolier, surrounded by the cabinets with materials tracing De Vinne. As a Grolier founding member, it was appropriate to hang him there. There were artifacts of his business dealings. He started as an employee of Francis Hart, and eventually acquired Hart’s business, but not without some rancor which was eventually settled in arbitration. His largest client was the Century Company, publisher of Century Magazine and many books. (For them he collaborated with the nascent ATF on the first versions of Century, the typeface, whose family was enlarged upon by others over the years.) Eventually, De Vinne became a grand figure in printing, penning books on its history and both giving and receiving rewards.

I heard some grumbles that De Vinne was not much of a designer. In fact, the examples in the show are all over the map, with respect to design. But he was also an important figure in the advancement of printing technology. The Hoe company frequently used his printing company as testers of new models. His firm was among the first to do quality printing on undampened paper. So, no matter one’s opinion of the man, he is undeniably a huge figure in printing history. 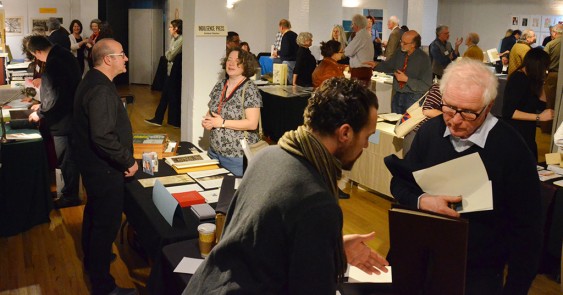 The Manhattan Fine Press Book Fair was the first of its kind. There were forty-some exhibitors, members of both the North American and UK branches. The hope had been that the presence in town of so many high-end book collectors (the Armory sale has the reputation as one of the country pre-eminent antiquarian events), and though the numbers have not been reported, anecdotal evidence indicates that hope was fulfilled.

Robert McCamant is proprietor of Chicago’s Sherwin Beach Press, editor of the Caxtonian (the monthly newsletter of the Caxton Club), past chair of North American FPBA, and is a past-president of the American Printing History Association.