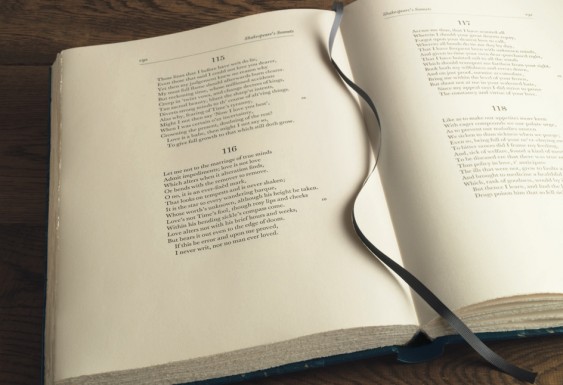 Interior spread of Shakespeare’s Sonnets, one of the 39 volumes of the Letterpress Shakespeare, published by The Folio Society, London. Source: foliosociety.com

In Mark Twain’s The Prince and the Pauper, the Great Seal of England was used as a nutcracker by the impostor prince. It sometimes feels like we use the heritage of the past in a similar way. It does solve the problem at hand, yet it could do considerably more.

The following notes examine one commendable example of looking to the legacy of the past for help with a present-day problem in book publishing. They are not so much intended as a critique of the particular project per se, as an analysis of the way it is presented to the world. Although publicity generally may not be the most reliable source of information, the way things are sold is revealing of the state of the current marketplace and of the culture at large.

From what I can gather, the new Letterpress Shakespeare, published by The Folio Society, typeset in Monotype Baskerville by Stan Lane of Gloucester Typesetting Services and printed by him and three other shops: Hand & Eye Letterpress, London, Logan Press, Northamptonshire, and Offizin Haag-Drugulin, Dresden, looks impressive.

It follows in the footsteps, albeit perhaps unaware of, a number of lavish Shakespeare editions of the past, including Hanmer’s The Works of Shakespear, University Press, Oxford, 1743–44 and Boydell’s Shakspeare, Shakspeare Press, [Bulmer], London, 1792–1802. Limited Editions Club’s The Comedies, Histories, and Tragedies of William Shakespeare, designed by Bruce Rogers, 1939–40 and The Works of Shakespeare, [Cambridge University Press], The Nonesuch Press / Random House, New York 1929–33 designed by Francis Meynell are two important recent precursors, especially since both companies produced fine (letterpress) editions, outsourced their printing to commercial printers using machine presses and published the classics in higher print runs at a more affordable price for a wider audience than the other fine limited editions establishments of their time. Both also operated on a similar subscription-based model to that of  the Folio Society. What sets them aside from the present offering, is that in the 1930s the book was still considered as a whole, with production values an important but not paramount part, and the designer’s role prominently featured. The Nonesuch Press had a benefit of having one of the leading book designers of the time, who happened to be its publisher, on staff. LEC went out of its way to secure services of every designer of note available. While many of the LEC illustrators, famous in their day, have passed into oblivion, many of their books are still celebrated for their design.

With offset printing overtaking commercial printing market a few decades after the heyday of LEC and the Nonesuch Press, letterpress has become a province of the lone “fine printer,” a vanishing craft, tailored for the minuscule bibliophile market. Small print runs, expensive materials, and fanciful bindings made the fine press books precious and expensive, and were at times used at the cost of considering fitness to the purpose.

Today, letterpress is enjoying something of a popular revival, not so much as a book-printing medium, but mostly as a fashionable way to print wedding invitations. Folio Society, too, is blissfully rediscovering the technique used by all book printers for 500 years since Gutenberg until mid-twentieth century. Indeed, all of Folio’s own books were printed this way from the company’s beginnings in 1947 until about thirty years ago, including its earlier 37-volume Shakespeare set. Nobody thought of trumpeting this fact at the time. Now, the choice of this printing process becomes a fashion statement. The mere inclusion of the word “letterpress” in the title of the work testifies to a sort of infatuation that only an unfamiliar medium can generate. It is encouraging to see the high-quality printing and hand binding reclaimed by today’s mainstream publisher, although it is somewhat disheartening to observe how advocacy for the tactile properties of the traditional techniques replaces the discussion of the artistic merit of the production. While reveling in the hand-crafted aspect of the project, neither the publisher’s website, nor the glowing coverage by Creative Review magazine, allow you to get a good look at the typography, show a title page, or discuss the design beyond mentioning the type choice, the width of the margins, and the decision to relegate commentaries to a separate volume. Admittedly, gorgeous photographs celebrate the fact that type leaves an impression (!), the book is bound in leather, the paper has a deckle, etc. There is a vague phrase about “some of the Europe’s finest book designers” that remain unnamed, unlike the typesetter, the printers, and the paper marbler. If upon closer examination, the typography and the design of these books do prove to be excellent, as they may be, there is no way of knowing it from the publicity materials available to this writer.

As we saw, a similar focus on the production values with frequent disregard of the design has dominated much of the fine press discourse over the recent decades. It is understandable, then, that a commercial publisher venturing into what has become fine press territory, could fall into the same trap.

Misha Beletsky has been art director of Abbeville Press, a publisher of fine illustrated books in New York, for over a decade. His design work has been recognized by a number of prestigious competitions (such as AIGA 50 Books of the Year and New York Book Show) and is included in permanent collections of major museums and libraries (MoMA, the Metropolitan Museum, and the Hermitage, among others). Misha serves as an Executive Vice President of the Typophiles and is a member of the Non-Latin Advisory Board of the Type Directors Club. His publications on the history of graphic arts include "Zvi Narkiss and Hebrew Type Design" (in Letter Culture Type) and The Book Jackets of Ismar David: A Calligraphic Legacy. He is a regular contributor to Interni Russia and The Type Journal. He curated Russia Rising: Votes for Freedom, an international poster exhibition at the School of Visual Arts (with Steven Heller). He recently spoke on history of Soviet poster design at Type Directors Club and on the art of early 20th c. Russian children's book at New York Comics and Picture-Story Symposium.