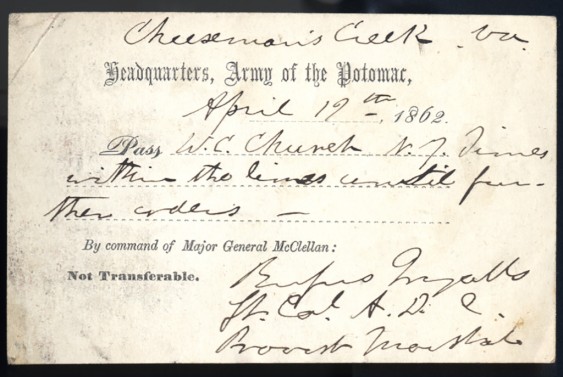 William Conant Church (1836–1917) of Rochester, New York was known for his newspaper work before, during, and after the American Civil War. He contributed to newspapers such as The New York Chronicle, The Sun (New York), the New York Evening Post, The New York Times, the Army and Navy Journal, and The Galaxy Magazine.

Early in the war, in 1861, Church traveled south with Union General William Tecumseh Sherman and Admiral Samuel Francis Dupont and saw the capture of Port Royal Sound, South Carolina, from Confederate forces on November 7, 1861. He returned to New York and wrote about the Union victory in the New York Evening Post. Soon afterward Church volunteered to serve with Colonel (later Major General) Silas Casey, under Major General George B. McClellan in the Union Army of the Potomac and was present during the Peninsula Campaign battles of Williamsburg and Fair Oaks Station, Virginia. Church, after being wounded at Williamsburg, was given the rank of captain and was “appointed acting inspector and mustering officer of provisional brigades. . . In rapid succession came the [honorary ranks] of Major and Lieutenant Colonel of volunteers. It was while he was on the staff of General Casey that the project of establishing a military paper was commenced and the assignment fell to Colonel Church, who resigned [from the Army] to accept it. With his brother, Francis P. Church, he began the publication of the Army and Navy Journal at 192 Broadway.” 1

Church wrote for The New York Times as a Washington correspondent while serving under Casey, an occupation which was not uncommon during the war years and was understandably regularly promoted by news agencies. Correspondents stationed with military units, whether soldiers or not, were generally tolerated by both the Union and the Confederacy early in the war. Some commanders, including McClellan, were less concerned with censoring journalists’ reports. Later in the war, however, they began to be considered more of a nuisance, and dangerous and a hindrance to military actions. The reporters, however, depending on stories for wages, found ways to circumvent any regulations put upon them. Interestingly, journalist communiqués transmitted by telegraph were regularly edited, but hand-carried script and articles eventually published by newspaper were not. These were used as a method of sidestepping censorship. The Army and Navy Journal, later published beginning in 1863 by Church and his brother continued the tradition of requesting information from the military, calling out to Union correspondents with: “The Editor of this Journal will always be glad to receive from officers in the two services, correspondence and general communications of a character suited to its columns. It is necessary that the name of the writer should, in all cases, accompany his communications, not for publication, but as a guarantee of good faith.” 2 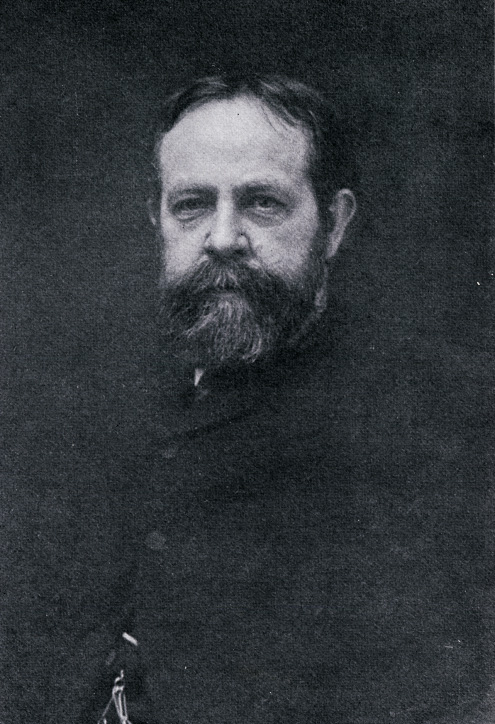 Fig. 2. William Conant Church ca. 1900 after a photograph in Biographical Sketches of Distinguished Officers of the Army and Navy. (Courtesy of the Smithsonian Institution Libraries)

Pseudonyms, described as advantageous to the writer, the message, and the newspaper, were used regularly as journalist identifiers in newspaper articles. James Gordon Bennett Sr., founder, editor, and publisher of the New York Herald, “had long insisted on anonymity for Herald reporters; Sam Wilkeson, while the New York Tribune Washington bureau chief, advised his editor, ‘The anonymous greatly favors freedom and boldness in newspaper correspondence. I will not allow any letter writer to attach his initials to his communications, unless he was a widely known & influential man like Greeley or Bayard Taylor . . . . Besides the responsibility it fastens on a correspondent, the signature inevitably detracts from the powerful impersonality of a journal.’” 3

The New York Times boasted at least 25 different pseudonym-signed reports just during 1862. For at least some of his work with The New York Times Church used the name Pierrepont. Described as one of the “Bohemian Brigade” of reporters, he was counted as one of the “men of energy, style, and perception. If they lacked the magic touch, all of them wrote well enough to bring a sense of participation in the war to their readers. . . .” 4

Church’s description of the Peninsula Campaign Battle of Fair Oaks Station landed on the front page of the June 3, 1862 edition of the Times. He wrote from the “Field of Battle Before Richmond, Sunday A. M., June 1, 1862” about Casey’s position, the lay of the land, Confederate reconnaissance, the weather, the battles, and the casualties. His words about “The Attack on Saturday” (May 31, 1862) follow:

“Shortly after noon the grand attack commenced, Gen. Casey’s pickets being driven in all along the front, after a spirited resistance, the rebels advancing in force along three roads—the Williamsburgh road, to our left, the railroad, in the centre, and the ‘Nine-mile Road,’ as it is called, on the right. With his feeble division greatly weakened by extension, Gen. Casey had no backbone to oppose to this sudden attack. But no thought of yielding his ground entered the mind of the old soldier, scarred with the wounds of Mexico and disciplined to danger by a hundred fights. His troops were immediately formed into position, the three brigades maintaining their relative positions on the right, left and centre, and as thorough preparations were made for resisting the attack as its suddenness would admit of. . . . The vigor with which the enemy pressed forward to the attack indicated the confidence of superior strength…pouring in at once a fire hot and heavy, and advancing with great resolution in the face of the steady fire of canister and grape from the [Union] guns in front, and shell from those further to the rear, moving down the ranks in all directions. The rebels had but little artillery, and were evidently disposed to make good the deficiency by pressing to close quarters with their superior force, to bear down at once by weight of numbers the feeble skeleton regiments of three and four hundred men who composed the advanced [Union] division.”

Church’s journalist status, which required that he conduct some of his business away from his unit, depended on an official order allowing these movements. The early version of what we would today call a press pass was prepared by the printing unit attached to Army of the Potomac. The pass was filled out and authorized before the above battles on April 19, 1862, and filled in and authorized to allow Church’s work “within the lines,” where he would be able to cover the events of the war.

As referenced in Printing History, New Series Number 12 (July 2012), 5  newly invented and manufactured portable, table-top printing presses were regularly advertised, purchased, and used by the Union and Confederate armies and navies both in offices in larger cities, such as Richmond and Washington, D.C., and in the field. McClellan was a consumer of such presses, having purchased two Cooley presses by early 1862. 6 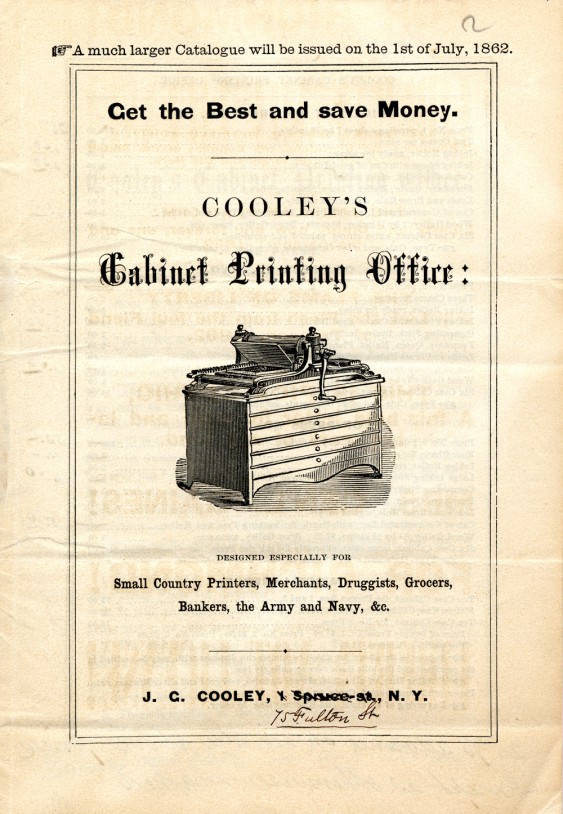 Church’s later newspaper, the Army and Navy Journal, even references the praise of an agent of the Swiss military in the agent’s translated report about the Union army and McClellan’s success with field printing presses, along with railroads, and telegraph lines stating that “Field printing-presses, operating with great celerity, are also attached to various staffs.” 7

Lieutenant Colonel Rufus Ingalls, aide-de-camp and provost marshal for McClellan and the Army of the Potomac, was responsible for authorizing this order or press pass for Church. Ingalls would have had access to McClellan’s printed documents, many of which were designed and prepared on the spot with available type and paper, such as orders, receipts, paroles, etc. 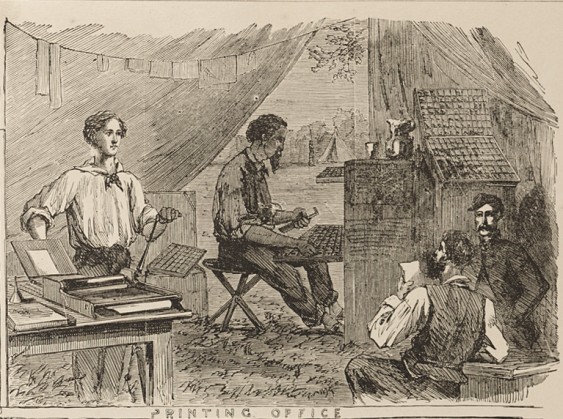 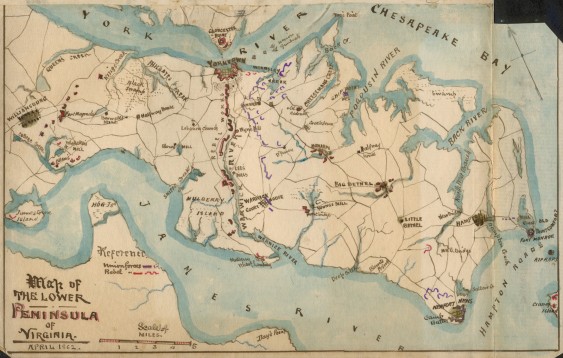 Fig. 5. “Map of the Lower Peninsula of Virginia, April 1862,” by Robert Knox Sneden. (Courtesy of the Virginia Historical Society)

The mention of the location of the authorization of the pass at “Cheeseman’s Creek, Va” is an interesting addition to its history. The creek, regularly documented with that name in Union publications, is now known for the local family name Chesman, or alternately as Chrisman’s Creek. It sits on the north side of the peninsula on the Poquosin (now Poquoson) and York Rivers and adjacent to the Chesapeake Bay. John Hay, private secretary to Lincoln during this time (who would have visited the area with Lincoln in May 1862), writes “If you look at your map of Virginia you will not see Ship Point. But if you will write that name just north of the mouth of Poquosin river, and south of the debouchure of Cheeseman’s Creek, your map will be ever after more valuable. The importance of the place consists in this: that the Poquosin river and Cheeseman’s Creek afford great facilities for landing troops, and that vessels not drawing more than seven feet of water can land at the very dock at Ship Point, and those of still heavier draught find no difficulty in running along side the abrupt banks at the head of Cheeseman’s. It becomes a matter of great importance to economize transportation of supplies as our vast army moves inward, and it seems as if Providence threw this piece of singular good fortune directly into our laps. Ship Point battery, with its two dozen guns, is a ‘good thing to have in the country.’” 8 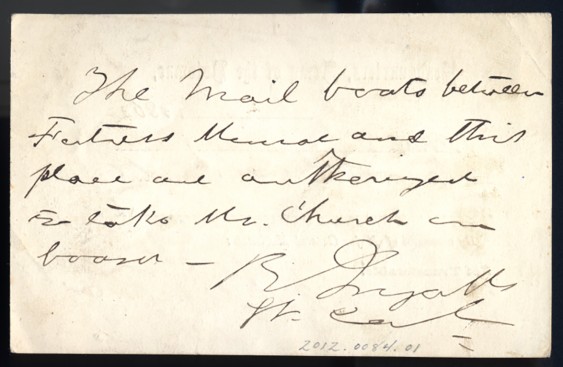 The reverse of the press pass assists the contemporary authorities with further instructions “The mail boats between Fortress Monroe and this place are authorized to take Mr. Church on board.” The two locations referenced were about an hour’s transport from one another, either by land or sea. The fort was a Union stronghold and position of importance throughout the war, especially because of its close proximity to the Confederate capital in Richmond. Church likely made use of the transports to travel to the front and to send his communiqués back north. An interesting aside is that Captain Grier Tallmadge of Fortress Monroe is described as also having a Cooley press by this time in early 1862, 9 and it is presumed that during McClellan’s stay in the area there may have been some incentive to share at least information about similar equipment and perhaps styles of printed documents.

The Army of the Potomac resided in this area through the Peninsula Campaign until July 1862.

In late 1862 Church with some encouragement took leave of the Army and began work to establish the New York-based Army and Navy Journal: Gazette of the Regular and Volunteer Forces, “a weekly newspaper, devoted to the interests of the Army and Navy, and to the dissemination of correct military information.” 10 Church was described in his obituary as “ranked among the foremost journalists and his paper, which was guided largely by his military training and experience, held fast to an extreme military policy,” 11 a reference implying that Church held true to the interests of the military in his paper’s writings.

According to author Brayton Harris, “Overall, throughout the war but not all working at the same time, there were perhaps 500 ‘Special’ correspondents (like Church) in the field, 350 for the North, and 150 for the South. . . four out of five had been in newspaper work before the war began.” 12

Other sources not mentioned above. 13

Joan Boudreau is a curator in the Smithsonian’s National Museum of American History, Graphic Arts Collection. The unit focuses on the international history of printing and printmaking. Joan’s current research interests include American Civil War field printing; Federal printed imagery of the American West; Patent models and the graphic arts; twentieth century comic art, and early printing by American missionaries. She has had two articles in Printing History “The Portable Press and Field Printing during the American Civil War,” July 2012 and "Publishing the U.S. Exploring Expedition: The Fruits of the Glorious Enterprise,” January 2008.