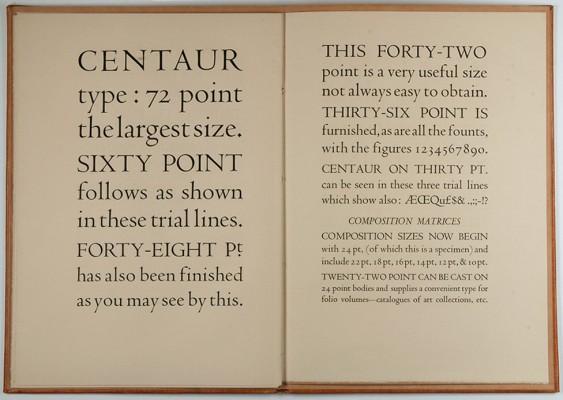 Page spread from The Trained Printer and the Amateur: and the Pleasure of Small Books by Alfred W. Pollard, Lanston Monotype Corp., 1929. Title on cover: “New Series of the Centaur types of Bruce Rogers and the Arrighi Italics of Frederic Warde. Cut by Monotype and here first used to print a paper by Alfred W. Pollard.” (RIT Cary Collection)

At 6:30 p.m. on Monday, 17 November, the 2014 Lieberman Lecture sponsored by the American Printing History Association took place at the Melbert B. Cary Jr. Graphic Arts Collection in the Wallace Center at the Rochester Institute of Technology. Professor Herbert H. Johnson delivered an excellent address entitled “History of a Type Design: Centaur by Bruce Rogers. With a Footnote on Its Erstwhile Companion, Arrighi, by Frederick Warde.” Professor Johnson skillfully demonstrated how Rogers was able to orchestrate the association of his roman type with the complimentary one of Warde’s italic font.

The lecture was enhanced by illustrations selected by Professor Johnson (a founding member of APHA) and Amelia Hugill-Fontanel, Associate Curator at the Cary Graphic Arts Collection (also an APHA board member and secretary of the Upstate New York Chapter). Original drawings for the Monotype versions of both Centaur and Arrighi were also on view at the Cary Collection for the lecture. They had been loaned from the Monotype corporate archives in England.

At the conclusion of this fine and informative presentation, questions were fielded by Professor Johnson, and Ms. Fontanel provided some news items relating to the Upstate New York Chapter of APHA, for example, a Wayzgoose is being planned by chapter president Richard Kegler at the Wells College Book Arts Center in Aurora, New York, in May 2015. She also informed the audience that APHA’s 2015 annual conference would be held at the Wallace Center at the Rochester Institute of Technology on October 23–24, 2015.

William T. La Moy is Curator of Rare Books and Printed Materials at the Special Collections Research Center, Syracuse University Library. Formerly he wast the James Duncan Phillips Librarian and the Director of Publications at the Peabody Essex Museum in Salem, Massachusetts. He has over thirty years’ experience in rare books and manuscripts and long service in the RBMS section of the American Library Association. Since 2011 he has been the editor of APHA's semiannual journal Printing History.