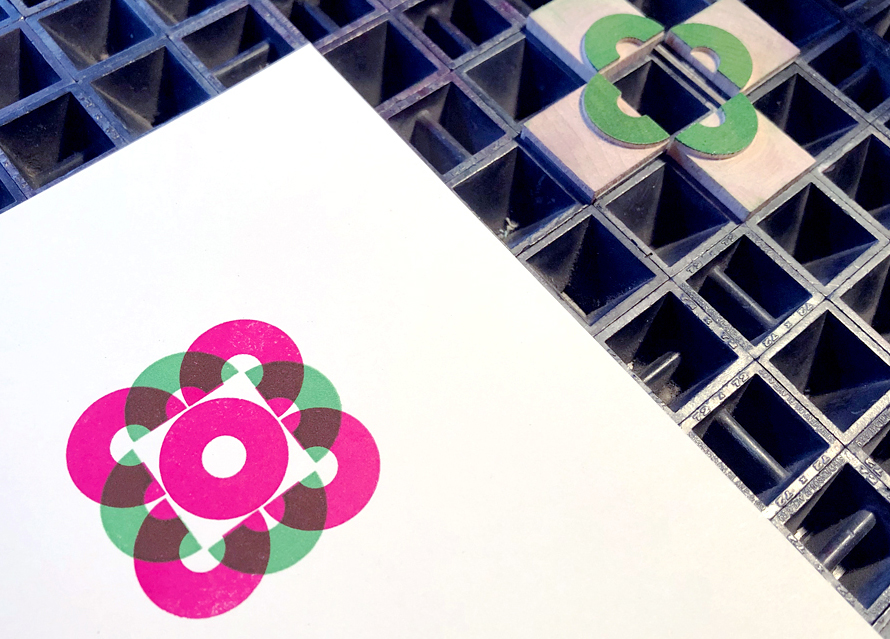 Thurs. Oct. 29 | Alexander Cooper and Tim Hutchinson introduced participants to Understanding Molecular Typography, a textbook that explores the atomic composition of letterforms. The book is a prank, an “elaborate work of non-narrative fiction” by the book artist Woody Leslie, but the conceit, letters as organic molecules, is worth some thought, and it inspired Alex and Tim to create the MODUS Type System.

Each participant had been sent a template—nine “atoms” from which the characters in the Latin alphabet can be assembled—along with colored pens and worksheets. After playing around with the atoms, watching visual rhythms appear among them spontaneously as we drew, we began work on actual letters and numbers. My handwriting is a hot mess and I enjoyed spending half an hour on one letterform. It was like doing calligraphy with compass and straight-edge.

I was given I and O, a line and a circle, to do. I thought happily of Ronald Johnson’s Io and the Ox-Eye Daisy, a chapbook that builds glyphs from the letters of Io’s name. The number I was assigned, 5, was as wonderful, recalling Charles Demuth’s painting “I Saw the Figure Five in Gold.” I must have had it in mind as I built my ornamental O. Even if Leslie is pulling our legs, I believe Alex and Tim when they propose that letters are living forms with wills of their own. It’s not an accident they’re called characters. Some of the forms we made were minimal, two elements your eye will finish for you. Others went all out: assemblages with the complexity of rooflines seen from a height. As I write, Alex and Tim are proofing our letters, readying them for transfer to wooden blocks: a bespoke typeface to showcase our adventures in what Robert Bringhurst calls “the solid form of language.”

Christopher Patton is a poet and translator. His most recent book is Dumuzi (Gaspereau Press, 2020). He's pursuing a Master's in Museum Studies at the University of Toronto and blogs at theartofcompost.com.