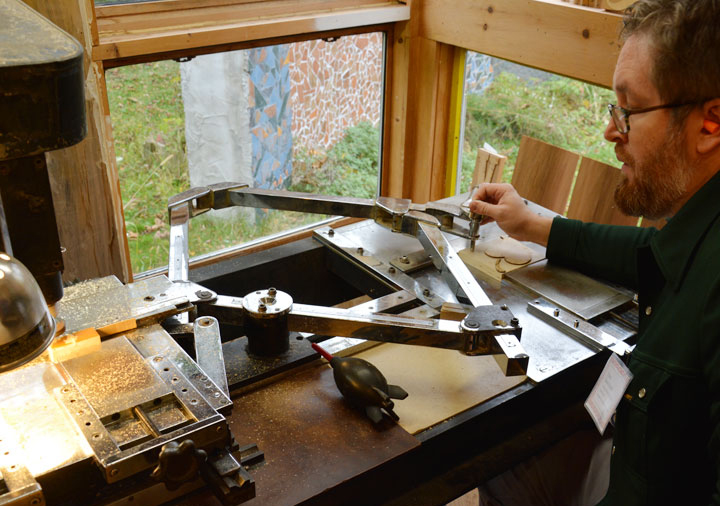 Conference speaker Todd Samuelson uses the pantograph to trace a pattern, at right, this defines the path of the router bit over the wood block, at left. (Ray Nichols)

Geri McCormick & Matt Rieck hosted a hands-on morning making wood type at Virgin Wood Type. The garage-sized workspace for the beginning stages of the production process was packed with boxes of wood ready for surfacing with shellac, shellaced-wood ready for cutting, and boxes of patterns.

Each participant chose from about a dozen patterns before moving to the pantograph. First the pattern was locked in position and then the wood blank was locked under the router. We were instructed to move the stylus in a clockwise motion around the pattern until all of the negative space around the desired image had been removed.

The pantograph, used to translate the image of the pattern to the blank wood block through a router, was a surprise in the way it was configured. Instead moving the stylus around the pattern to move the router across the block, the block moves around a stationary router. This seemed to help lock the router and wood together, which might create a lot less “chatter,” as it was called by Geri, when the router bit was passing through the block of the very hard end-grain rock maple. 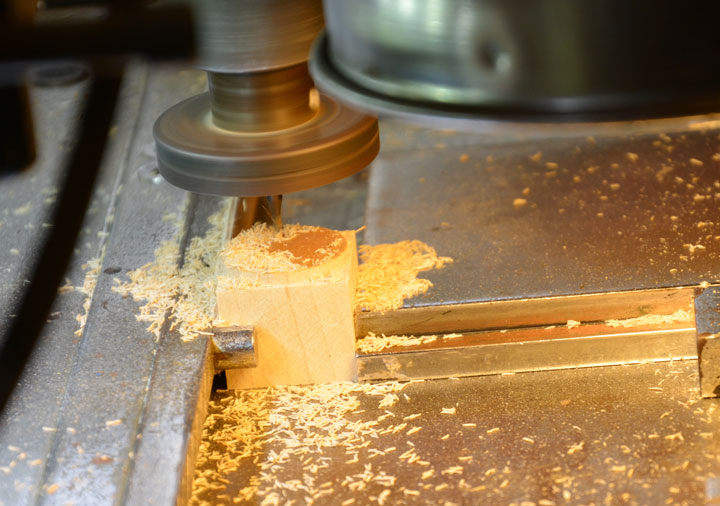 A closeup of the router cutting a small bird ornament. (Ray Nichols)

Doing one piece took an inexperienced hand 3 to 5 minutes to complete. While you didn’t have to exert much pressure during the process, you were constantly having to push the router bit through the wood. Then came the tension of the last step of very carefully moving the stylus around the final edge of what would produce the finished wooden image.

When making wood type, there is always at least some (and often a lot of) handwork before the piece is approved for delivery. The absolute minimum was running a fine file around every edge. This handwork clearly adds immensely to the overall effort required to produce a quality finished product. Another element of the handwork involved is hand-trimming. Because of the finesse involved with squaring rounded corners and angles left by the circular routing bit, Matt uses wood carving knives and custom steel punches to finish off each character.

Every individual piece is proofed using a sheet of carbon paper, which shows every detail. Virgin Wood Type had a hefty hellbox of pieces that did not survive their quality control, showing their final product was as close to perfect as the wood, often referred to as being “alive,” would allow. There was clear evidence that Virgin Wood Type wants to work in a production process that mimics the historic methods from the past century, while at the same time maintaining or even exceeding the same level of quality.

Almost everyone produced at least 2 pieces before we stuffed back into our van and headed to lunch and the Genesee Center for the Arts for our afternoon session.

It is worth saying that it is important for those in the APHA community, and the letterpress community at large who use wood type, to support and promote companies like Virgin Wood Type who work hard to keep us supplied with quality-made materials. I couldn’t wait to get to the vendor table part of the exhibition to contribute some Lead Graffiti support to their success.

Ray Nichols was coordinator of Visual Communications at the University of Delaware from 1978 to 2005, during which he was honored by many groups including the Art Directors Club of New York, The One Club for Art & Copy, and University and College Designers Association. With his wife-partner Jill Cypher, Ray cofounded the letterpress studio Raven Press at the University of Delaware. Upon Ray’s 2006 retirement from teaching, he and Jill started Lead Graffiti. He was president of APHA's Chesapeake Chapter 2010-2012.