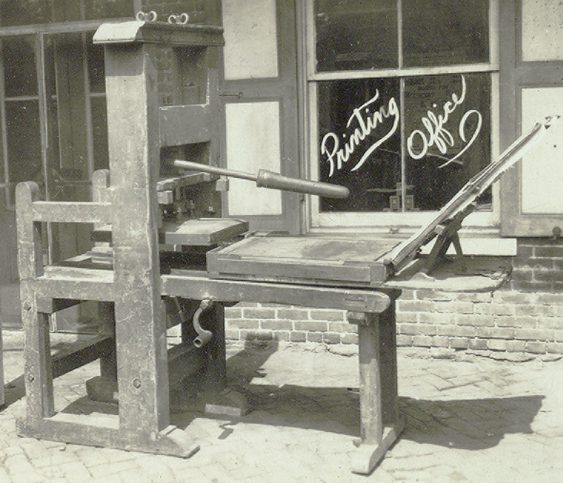 The first known one-pull Common press made by Adam Ramage, now at Juniata College, Huntingdon, Pennsylvania. This undated photo was used by Phillip Gaskell in his census of wooden presses published in the Journal of the Printing Historical Society in 1970. (Trinity College Library, Cambridge University)

While I was collecting hand press information for my book, A Field Guide to North American Hand Presses and Their Manufacturers, I encountered a number of Ramage Common presses, among them the two described herein that have larger platens than usual. I became intrigued by this anomaly and began searching for information that might support the idea that Adam Ramage, the first true manufacturer of printing presses in the USA, had tried enlarging the capacity of his wooden presses to make them more competitive with the incipient iron hand presses.

When manufacture of the English Stanhope all-iron hand press began about 18001, with its larger platen capable of printing the entire forme in one pull, printers were presented with the choice between this advanced, but expensive, press technology and the then 350-year-old, and more readily available, two-pull Common press. After the experiments a few years later by George Clymer to develop a different all-iron hand press, the Columbian2, the handwriting was on the wall for Adam Ramage, who was by then the most prolific builder of printing presses in the USA, though his product was limited at that time to the wooden Common press.

Milton W. Hamilton in his essay Adam Ramage and His Presses published in 1942 noted that in the records of Philadelphia printer Matthew Carey’s transactions with Ramage, he found reference to the bill in 1814 to Carey for a “Printing Press Compleat screw up platting, No. 371— $137.00”.3 Philip Gaskell, in his updated 1952–54 census of wooden presses published with photos in the Journal of the Printing Historical Society in 19704, listed and pictured Ramage press No. 371, Gaskell’s USA14, and in the undated photo it has a full-size one-pull platen with a bolted hose. The press was owned by Frank King or his daughter, Mrs. Albert Blough; Gaskell noted the “Full-sized one-pull platen in the photograph; now replaced with two-pull platen 19½ × 12½ in.” at the time of his census. This press is now in the Beeghly Library of Juniata College in Huntingdon, Pennsylvania, and presently has what appears at first sight to be a later reproduction one-pull-size platen 18½ × 23⅞ inches, which has split lengthwise. The screw of the Juniata press measures 3½ inches in diameter, the largest screw known to have been made by Ramage.

A careful re-examination, by the present writer, of the platen of the Juniata College press in 2016 shows that it is made of American Red Oak cut from near the center of the log, with iron bars rabbeted into the front and rear edges running across the grain. It seems possible that this platen is the original made by Ramage in 1814, and that the use of Red Oak was due to Ramage’s inability to obtain a sufficiently large piece of Honduras Mahogany, his preferred wood for presses. Oak can expand and contract quite a lot more with humidity changes than the very stable mahogany, and until the press arrived at Juniata College it undoubtedly was not kept in an air-conditioned environment. The climate-controlled library is almost certainly very much drier than its previous home, and the oak would shrink significantly there, creating the ⅛ inch split down the middle of the platen due to the restraining action of the reinforcing bars screwed into the wood and the bolted hose which is also firmly screwed into the wood.

In a note in his 1874 edition of Isaiah Thomas’s History of Printing in America, Joel Munsell paraphrased an 1856 letter from George Bruce, then retired from a career as a printer, stating that “Mr. Ramage enlarged the diameter of the screw to three inches, and where much power was required to three and a half inches, and at the same time reduced the fall in a revolution to two inches, which very nearly doubled the power, but decreased the rapidity of the action. … Importation had … almost entirely ceased as early as 1800. His great improvement on the screw and working parts connected therewith were made seven years later.”

It could well be that the original one-pull platen on the Juniata College Common press was installed by Ramage, a part of his efforts to improve the common press, for another Ramage common press, No. 512 (Gaskell’s USA21), owned by the Hartford, Connecticut Courant newspaper, also has a one-pull platen, 19 × 25 inches, with bolted hose; the platen looks the same as that in the old photo of No. 371. The screw of the Hartford press is 3⅛ inches in diameter. Although Gaskell commented “The single-pull platen is unlikely to be original”, the platen appears old and seems to be made of well-cured center-cut mahogany, the wood that, as noted earlier, Ramage favored for his Common presses.

In an advertisement in June 1814, the year No. 371 was built, Ramage stated: “ADAM RAMAGE, Respectfully informs his friends, and the public, that he continues to make PRINTING PRESSES Of all sizes, with additional Plattens and power for single or double pull, with Chases, Cases, Brass Rules, Furniture, &c…”5, an indication that he was then marketing single-pull Common presses. With evidence from two surviving presses and Ramage’s 1814 advertisement, as well as the many other innovations Ramage brought to the hand press, it seems probable that the “one-pull” platens were original equipment on these two Common presses, part of his efforts to offer a hand press technology competitive with that others were developing in the early nineteenth-century. 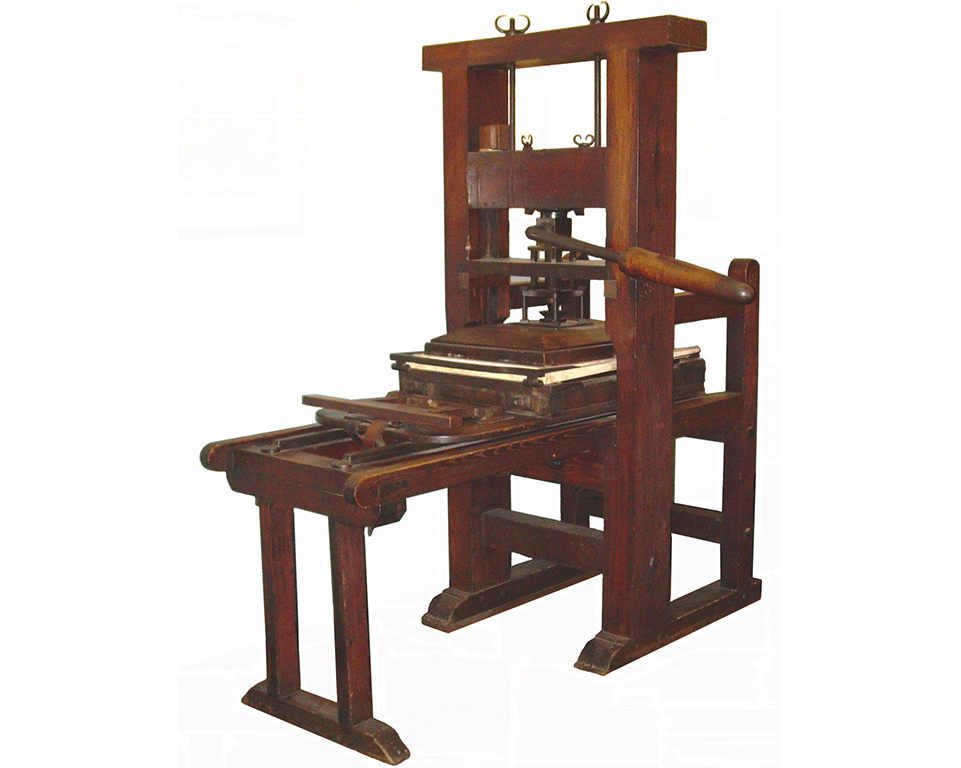 The second known Ramage one-pull Common press is now owned by the Hartford Courant newspaper in Connecticut, and it was probably built around or after 1820. (Photo by the author)

These two Ramage Common presses, both built after 1813 following the advent of Clymer’s Columbian, are the only two American Common presses known that have large one-pull platens.

John Wells: Hand Press Innovator by Joan Boudreau. “My discovery of the letters patent for John Wells’s renowned lever printing press and the 200th anniversary of the innovative beginnings of the press have…”

Festoons of Fancy by Site Visitor. “Via the contact form: I have a printing plate from the title page of Festoons of Fancy, William Littell, 1814, Louisville, Ky. I have been…”

Jerry Kelly, the 28th RIT Goudy Award Winner by Amelia Hugill-Fontanel. “The Frederic W. Goudy Award for Excellence in Typography was presented to Jerry Kelly on October 24, 2015 as the closing event of the APHA…”

Toward An APHA Checklist by Paul Moxon, Website Editor. “I am developing a checklist for this website of printing history publications written or edited by APHA members (current, lapsed and deceased), APHA Award Laureates, Lieberman…”