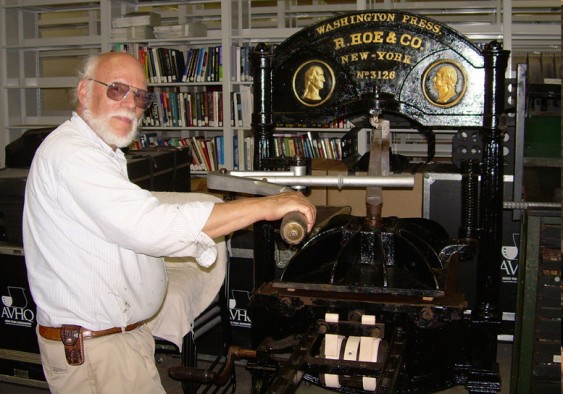 In North America, there are over 1,150 recorded hand presses of all types, makes, and vintages. They range from the press used by the first recorded English colonial printers, Stephen and Matthew Daye, in Cambridge, Massachusetts in 1639 (now in the collection of the Vermont Historical Society), to the eighteen reproduction tabletop Albion presses built by Steve Pratt in Utah, between 2001 until his death in 2012.

About twenty years ago, I began, and still maintain, the North American Hand Press Database to record all the hand presses of the lever style with horizontal bed and platen that now reside in North America (regardless of where they were made). Of the recorded presses, including reproductions and four known in Central and South America, about half are accompanied by photos. A PDF of the list, without owner information, is posted on my website: www.adlibpress.us.

Eight hundred hand presses in North America are now in museum or university collections. Another 350 presses are in private hands in the United States and Canada, some of which have been restored by their owners and used for book production or printmaking. Occasionally, one of these will come on the market and previously unrecorded presses sometimes turn up in local auctions at modest prices, as did an early Hoe Washington recently. Others are offered through auction websites at what I think are very high prices.

The North American Hand Press Database not only aids in research about the manufacturers and their products, but helps press owners seeking information or drawings of parts missing from their presses. I am often contacted by people who wish to learn where hand presses can be seen in public collections, as well as those who are looking to buy or sell a hand press.

Although printing with hand presses is a slow and meticulous process, it can be very rewarding. Modern fine printers have used them to produce many beautiful books and broadsides. And many hand press printers have also had a lot of fun collecting and printing on the hand press.