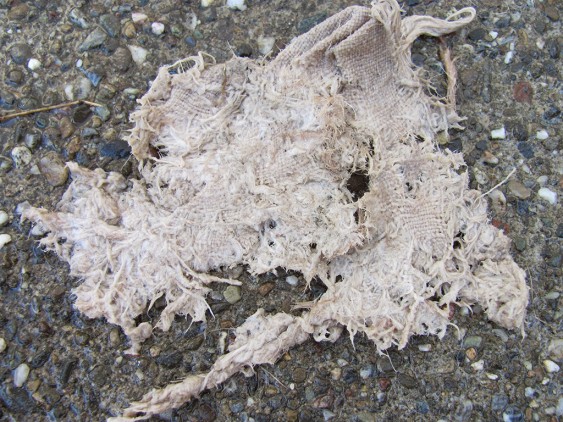 Hemp fabric, soaked in a slaked-lime solution and beaten by hand for 15 minutes. (Elizabeth Boyne)

Archeologists found the first and oldest piece of paper recorded in Asia dates from the Western Han dynasty around 105 CE. Made of hemp it was very crude. Peasants were encouraged to grow grains during the Han dynasty, one being hemp. In early paper making women soaked hemp in water and beat it on wash blocks of stone. Does this mean women invented paper?

Elizabeth Boyne, Artist in Residence at Kala Art Institute discusses and shows the results of her experiments with hemp. Boyne soaks the hemp in distilled water for one month then beats it for 15 minutes. Strands were then placed in a burlap-lined basket leaving fragmented residue after draining. Her second example was soaked in lime and water for three months and then beaten for 30-45 minutes and after agitating by hand in water, was drained in a basket without lining. This resulted in a gauze-like material. Participants were allowed to feel the samples. 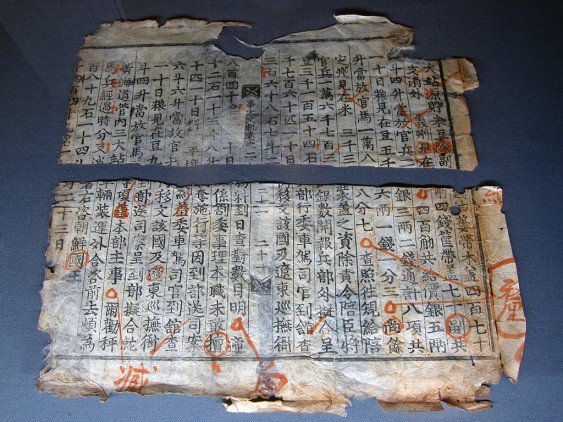 This past summer, Steph Rue, a Korean American, received a grant from the University of Iowa for a research project in Korea. She visited Buddhist temples, museums, paper mills and artisan workshops. Rue’s research focused on Korean traditional book arts and its connection to spirituality. She shared early Korean printing history and glimpses of traditional Asian book arts of today.

Rue told us that for centuries Japan and Korea used Chinese characters for writing and not until the 15th century did Korea develop its own alphabet. We learned that in 610 paper making was introduced to Japan by a Korean Buddhist monk and by the 7th century, hand paper making had developed into a distinct art using fiber from a paper-mulberry tree called dak to produce hanji, a paper of durability. Buddhist monks made woodblocks for the purpose of spreading the Buddhist sutras. They carved over 81,000 blocks taking 77 years. Destroyed by fire, they were recreated and in 1398 transported to Haein Temple in the remote mountains of South Korea where they remain today as a National Treasure.

By the turn of the 20th century printing began to decline in Korea with the 35 year Japanese occupation. Despite many transitions Korea has faced, there still exists artisans who continue to preserve traditional Korean techniques.

Barbara Brake is the daughter of a newspaper printer. Semiretired from nursing she enjoys work in public relations. She studied creative writing at Christopher Newport University.