Alan Nowicki began his presentation by discussing Roycroft Shops founder, Elbert Hubbard, who had been a salesman and the innovative marketing manager for the Larkin Company, a soap manufacturer in Buffalo, New York. He retired in 1892 after traveling to England and visiting the Kelmscott Press. While there is no historical record of a meeting with its renowned proprietor William Morris, Hubbard was enamored of the work done at the press.

Upon his return to America, Hubbard began to follow Morris’ example and made plans to publish the first of his Little Journeys series. He then joined with Harry Taber in his East Aurora, New York printing business, eventually buying Taber’s interest and continuing the Roycroft Shop as it had become known.1

Nowicki then described the first Print Shop building (now a part of the Roycroft Inn), patterned after the English Lake District church where the poet Wordsworth is buried. In those early days the Print Shop had rooms named for Morris and John Ruskin. The printing operation was housed in the basement, with a library and bindery above. Initially employing three men and five women as printers and bindery staff.2

Next, Nowicki mentioned Hubbard’s famous essay “A Message to Garcia” published in the March 1899 issue of the Roycroft magazine The Philistine: A Periodical of Protest. It struck a chord with George H. Daniels, Advertising Manager of the New York Central Railroad, who wanted 100,000 copies. Hubbard’s little operation could not print such a large quantity, so he granted Daniels permission to reproduce it for distribution by the railroad. Nowicki described the essay’s thrust as “if given orders, don’t ask questions, just do it to the best of your ability.” Big business loved it, and over the years more than forty million copies have been produced.

After the broad success of “A Message,” Hubbard joined a lecture circuit and generated great interest in the work of the Roycroft shops. He turned the original shop into an inn to accommodate the many visitors who came to East Aurora, and built a new one across the street with 22 presses. Nowicki indicated that Hubbard imported more handmade paper than any other printer in the U.S.

The Roycroft name is well known for its furniture and copper work that was originally made for use in the shops, but was soon advertized for sale. Several designers were attracted to the Roycroft shops over the years, including W.W. Denslow, Dard Hunter, and Louis Kinder.

In May of 1915, Hubbard and his wife Alice died in the sinking of the RMS Lusitania off the southern coast of Ireland. Hubbard’s son, Elbert Hubbard II (Bert) managed the works until the Great Depression caused its demise and the properties were sold.

In the 1970s, local townspeople started the “Roycroft Renaissance.” The Campus received National Landmark status in the 1980s with the help of former Buffalo Bills quarterback, then Congressman Jack Kemp. The Roycroft Inn was restored with the help of the Margaret L. Wendt Foundation, to its former glory, and the copper shop was renovated as a gallery and exhibit area, including a working Chandler & Price printing press.

Nowicki concluded his talk by informing us of the latest initiative: in June of 2015, the Roycroft Campus Corporation purchased the print shop building from its former owner, Cornell University Extension, and plans are underway to restore some of the printing equipment to the lower level of the building (Cornell University will continue to rent a space for their Extension activities). Printer Joe Weber is donating a number of presses and equipment to the effort. Next summer Mr. Nowicki hopes to have some of the presses running. 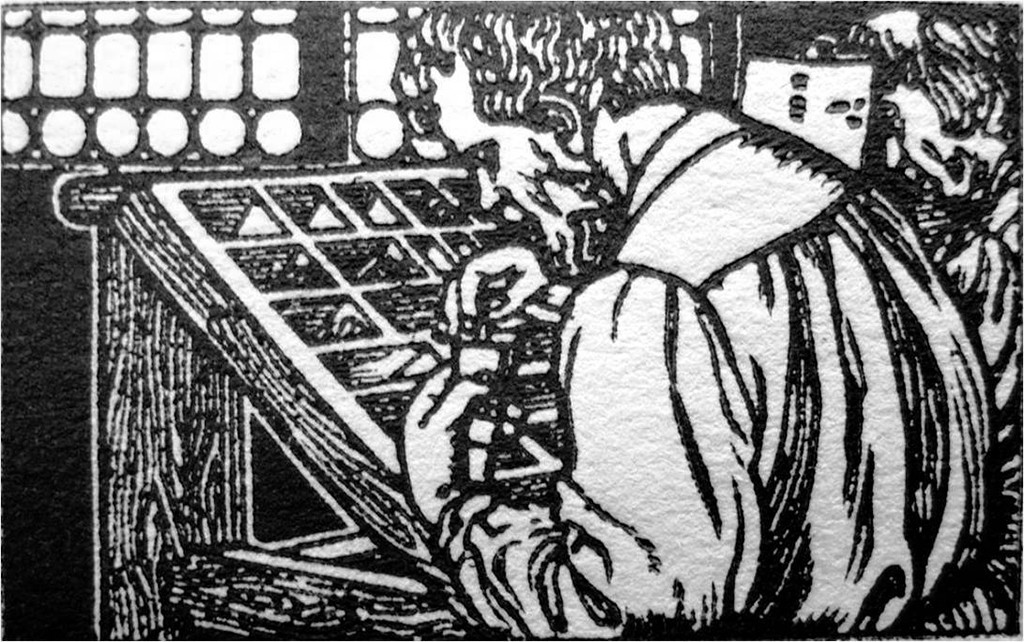 A stock image used in Ruth Widen’s In Praise of Pain, Parnassus Press, 1928.​ It can be found in the 1912 and 1923 American Type Founders Specimen books.

According to Mellby, Lew Ney “performed the role of Bohemian Hobo with gusto.” A prominent figure in the arts community of Greenwich Village, Ney made his living as a printer for thirty years. He was called the “Typographic Tympani” of Greenwich Village and also “The Mayor” of Greenwich Village. He started what he called the “National Poetry Exhibition,” which initially took the form of pinning pages of poetry to the walls of his shop at 30 E. 12th Street, and then in cafes in the area. Eventually the exhibition became a series of scrapbooks.

Lew Ney published a journal, Parnassus, which became the imprint for the books he produced. In 1927, Ney began using a typeface called Inkunabula, designed by Raffaello Bertieri, as his house face. In the mid 1930s, Ney began to print a series of books published by the Alcestis Press of Ronald Lane Latimer, starting with Wallace Stevens’ book Ideas of Order (1935), acclaimed for both the poetry and the design. Unfortunately for Ney, all the credit went to Latimer. Subsequently, Ney was tricked by Latimer into printing multiple books without payment by holding one book while others were being typeset. An example of this was a book written by Allen Tate. Upon questioning when his book would issue, Ney wrote to Tate, telling him that Latimer had scheduled a couple other books ahead of his even though the type for Tate’s was set. Then Latimer gave the manuscript to another printer while owing Ney $1,000. (This  in the midst of the depression). Eventually, Ney offered to print some copies from the standing type, and published an edition of twelve copies funded by Allen Tate’s brother, Ben.

John G. Henry is the owner/proprietor of Cedar Creek Press of Mason City, Iowa. In his career he taught at Oklahoma State University and Northern Illinois University, and was the Technical and Research & Development Manager for Metalcraft Corporation. His degrees are in Journalism, English and Printing Technology. Henry is very interested in the technical aspects of printing and binding.

Jeffrey D. Groves’ Plenary Address by John G. Henry. ““A Hands-On Approach to Printing History: Lessons Learned in the Construction of a Common Press” 9:30 am saturday, october 24  In his classes, Jeffrey D. Groves…”