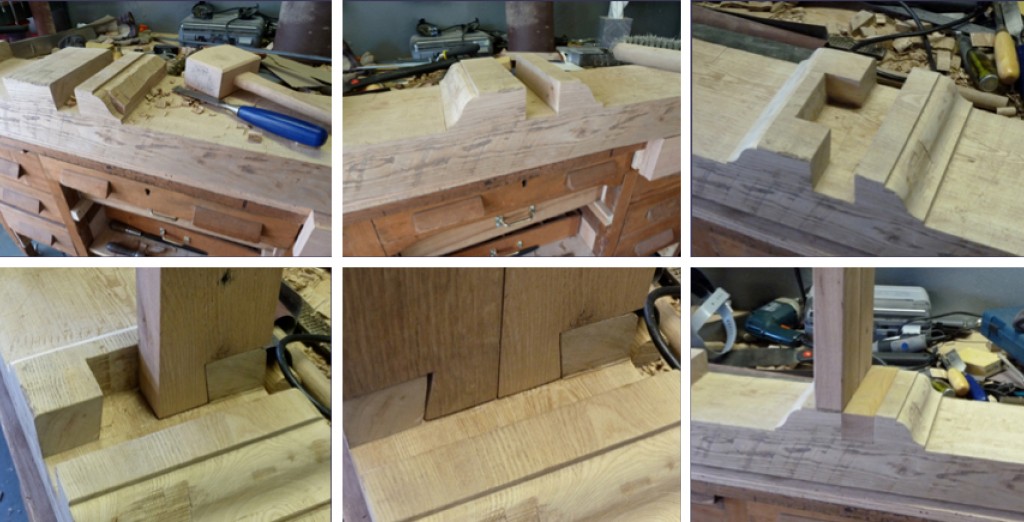 Carving the cheeks and setting the till for a common press. (Jeffrey D. Groves)

“A Hands-On Approach to Printing History: Lessons Learned in the Construction of a Common Press”

In his classes, Jeffrey D. Groves utilizes the iron hand press to provide students with an introduction to letterpress printing as well as to an historical background of the process. A hand press is something which in our digital age is very attractive for students to use. Groves says to hear the snap of the frisket releasing the paper from the type form provides an audible sign that the ink has been transferred to the paper and gives students a hands-on experience with the process.

In this address, Groves outlined his own process in constructing a wooden common press which he hopes will provide an even more in-depth view of the history of printing to his students. The process began with a trip to the American Antiquarian Society in Worcester, Massachusetts to study the construction details of a press used by Isaiah Thomas, first in his print shop in Boston and after 1775 in his Worcester shop.1

Groves was given permission to measure and record the details of the press and its construction, but was not able to disassemble it to detail the joinery and individual pieces. Over the years, the press, of course, had seen quite a fair amount of wear, so the measurements Groves recorded needed to be adjusted somewhat in certain areas to approximate more fully the original measurements. Some of the parts had been damaged and replaced over the years, and Groves tried to take note of those parts as he studied the press. One of the advantages of using a wooden press was that local craftsmen could be called on to make modifications and repairs as required.

Once measured and drawn, Groves took the plans home to his garage workshop and began the construction of a close duplicate of the Isaiah Thomas press. Groves’ press is not quite complete at this point, but using it as is, some successful proofs have been taken. The press now lives in the Special Collections reading room of the Claremont Colleges Library. Disassembly took thirty minutes and reassembly took about two hours. This portability, Groves assumes, is what made this press design popular for a time in the colonies. By the 1790s, most presses were manufactured in the United States, and fewer were imported from Europe.

Groves went on to discuss the fairly rapid transition from wooden to iron presses between 1814 and 1835. By 1814, George Clymer2 began promoting his Columbian press design as requiring “less manual labor,” and that it “leaves little to the judgement of pressmen.” Although the presses were selling for three times what a wooden press might cost, they were beginning to make inroads in the press market. (The Stanhope press design, popular in Britain and Europe, was not considered by American printers.)

To increase his sales, Clymer moved to London in 1817, and he sold many more presses in Europe than he did in the United States. After his move, Groves says that Clymer continued using various promotional ploys to keep his presses in the news. In 1819, Clymer was given an award by the Czar of Russia, and donated a press to the Archbishop of Jerusalem, both events cited in news stories at the time increased the awareness of the presses.3

Dr. Groves has been surprised by how many people have been intensely interested in his building of the common press. He has received a good deal of email regarding the project, and has distributed many copies of his plans for the press to interested parties who have expressed interest in building their own presses.

John G. Henry is the owner/proprietor of Cedar Creek Press of Mason City, Iowa. In his career he taught at Oklahoma State University and Northern Illinois University, and was the Technical and Research & Development Manager for Metalcraft Corporation. His degrees are in Journalism, English and Printing Technology. Henry is very interested in the technical aspects of printing and binding.

The Home Stretch: Building a Wooden Common Press by Seth Gottlieb. “This is the fifth in a series of posts that will appear throughout the year. It shouldn’t come as a surprise that building a wooden…”