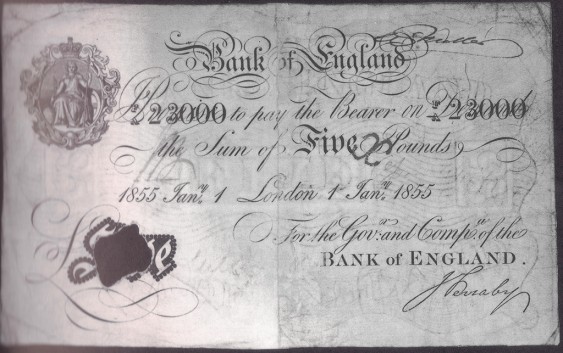 Session I, Panel 2. “The Anatomy of a Banknote: 1855 Innovations in Design, Papermaking, and Printing,” presented by Richard Kelly and “Calendered Paper, Electrotyping, Hard-Packing and Late Nineteenth-Century “Fancy Type Faces,” presented by Michael Knies.

Richard Kelly’s talk was illustrated with many fine examples of currency from his own collection. He engagingly outlined the historical progression of security innovations employed to thwart the counterfeiting of banknotes, stock certificates, cheques and bonds. Amongst late eighteenth and early nineteenth century European attempts to render impossibly complex and “inimitable” printed notes were the inclusion of unique nature prints and intricate fleuron patterns. Another measure was adding counterfoils (stubs) to cheques and other negotiable instruments. However from 1812–1817 an estimated 130,000 banknotes of the Bank of England were still forged, and that number doesn’t include the counterfeiting of the notes of other British banks—an offense punishable by hanging or transportation (i.e, banishment) to Australia.

Enter the Bank’s mouldmaker William Brewer and die-sinker Henry Smith who in 1859 patented a method of creating light and shade watermarks for currency paper. Their moulds incorporated thin brass plates that were die-stamped with the desired designs, eliminating the need to hand-wire a mesh screen of some 1056 wires. Their method could produce 3-D like characters, waves, and images. Combined with contemporary technological advancements—e.g. the development of custom inks for printing fine-resolution vignette engravings, Napier’s specially designed platen press, and new techniques for making composition rollers—security printing reached as Richard Kelly aptly stated an “Apollo Mission” level of success in hindering copyists. And he also spoke about the then-celebrated, artists, engravers, etc., who made this unique note of 1855 the success it was, surviving, largely unchanged, for nearly 100 years.

The following report compiled from notes by Amelia Hugill-Fontanel and an abstract by presenter Michael Knies. —Editor

Michael Knies told his audience that American type founders in the late nineteenth century produced a numerous and “bewildering” variety of fancy typefaces. Designed primarily for job printing, many of these typefaces were “quite extravagant and some would later be criticized as being quite ugly.” He cited three innovations that had made printing them well possible: electrotyping and calendered paper (developed in the early to mid 1800s) and hard-packing of press cylinders (developed somewhat later). Electrotyping allowed the cutting of punches with extremely delicate lines that would not survive being driven into a traditional matrix. Instead, the matrix could be made from the softer metal punch by the electrotype process. Mr. Knies, also noted, that one consequence of electrotyping was that it also made piracy of typeface designs easier. He then pointed out that these delicate faces could only be properly printed on dry, calendered paper. Traditional softer papers had to be printed damp, absorbed more ink and blurred the lines. American printers also used the technique of “hard-packing” cylinder presses for high quality printing work. This meant covering the cylinder with a glazed board instead of a woolen blanket. Although calendered paper was invented in the United Kingdom, magazine printers there were slow to adopt the techniques necessary to effectively utilize the new imported faces and the newly developed illustration processes. Eventually they did and produced higher quality work. Among the stellar example Knies showed were specimens from the American Printers’ Specimen Exchange (1886) and Printers International Specimen Exchange (1875).