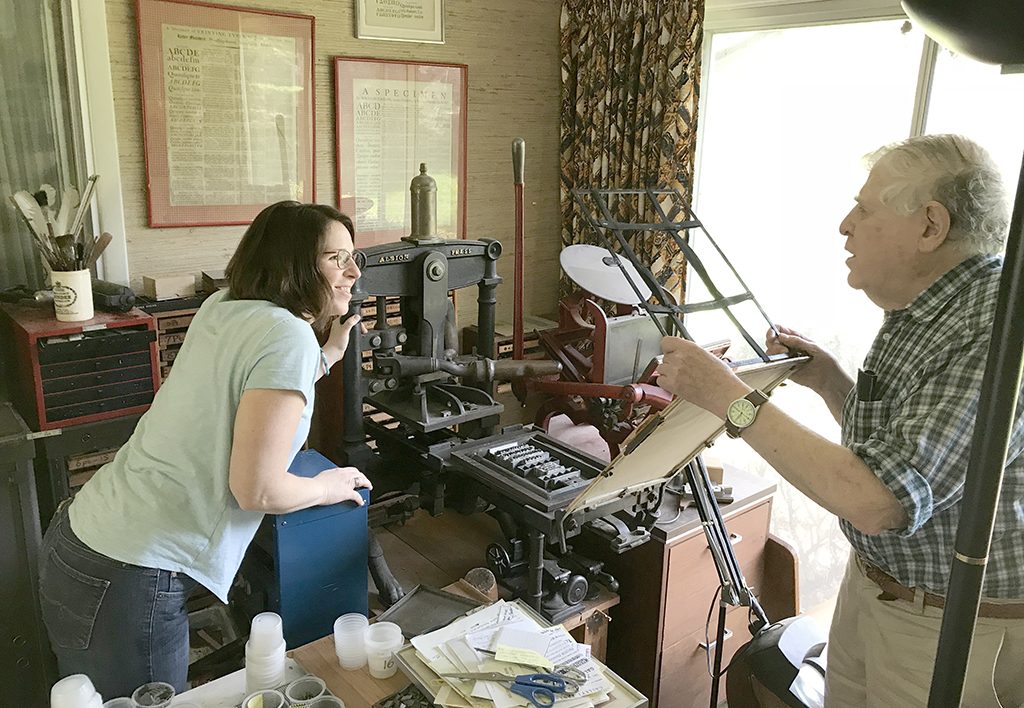 Stephen O. Saxe, a collector and historian whose canon of writings on printing history set the standard for contemporary practice in the field, died on April 28, 2019 at his home in White Plains, New York. He was 89 years old. He succumbed to complications after a heart attack, confirmed his longtime friend Karen Horton.[1]

Mr. Saxe, was a graduate of Riverdale Country School, Harvard College, and Yale Drama School. He began his career in summer stock doing set design and then moved to television where he designed sets for soap operas. Subsequently he became a book designer and graphic artist for Harcourt Brace in New York City.

Retiring at 55, Saxe turned to full-time study of letterpress printing and the collecting of type specimen catalogs. This avocation was formalized in 1974, as Saxe was a founding member of the national American Printing History Association (APHA), which continues after some 40 years to “encourage the study of the history of printing and related arts and crafts, including calligraphy, typefounding, typography, papermaking, bookbinding, illustration, and publishing.”[2] He was APHA’s esteemed Lieberman lecturer in 1991 with his talk on “Printing on Trains, and Trains in Printing,” at the Book Club of Texas.

His expertise in the realm was nineteenth-century type manufacturers and the mechanics of foundry machines and printing presses. He published several in-depth articles in the early issues of APHA’s journal, Printing History, including an exhaustive survey of New York City type foundries complete with first-hand descriptions of dozens of the factory buildings if they were still standing in 1980.[3] Mr. Saxe served as the Association’s newsletter editor from 1986 to 1990, adding accomplished serial articles on topics like library collections that held typographic holdings and the provenance of early hand presses. His careful research and attention to elucidating forgotten facts about the printing trades were presented through clear, informative writing—no doubt a skill honed at Harvard University, where from 1951 to 1953 he was a student journalist at The Harvard Crimson.[4]

Steve, as he preferred to be called, was not only a scholar, but a true collaborator who attracted talented publishing partners. He is noted for his historical descriptions paired with masterful wood engravings by John De Pol in the elegant book, American Iron Hand Presses which was issued in a letterpress edition from Yellow Barn Press in 1991[5] and followed by a trade edition through Oak Knoll Press in 1992.[6] This was soon followed by his 1994 annotation and expansion of Maurice Annenberg’s Type Foundries of America and their Catalogs,[7] also published by Oak Knoll. Here, Steve meticulously fact-checked Annenberg’s 1975 tome, considered as an indispensable compilation for the study of type specimens. Saxe improved the book by adding eight appendices with checklists of important specimen collections, including one for his own voluminous library. He also collaborated with Elizabeth Lieberman to write a much-needed index. The resulting second edition has endured as a foundational text for printing historical studies.

Steve Saxe’s collaborative and generous spirit was experienced by those who worked closely, or even remotely with him. Dr. David M. MacMillan, of the antiquarian technology website “Circuitous Root,” [8] wrote in remembrance of him:

What I will miss the most is his [Steve’s] help and his encouragement. It wasn’t just that he had put together one of the world’s finest collections of specimen books; many people have collections. It was his willingness—his eagerness—to put it to use to help. Many times I would fire off an unreasonably obscure question about the history of type or type machinery (he was the obvious “go to” person for this, since his knowledge of 19th century type-making was astonishingly comprehensive and detailed). Time and again he would reply not just with an answer, but with a scan from a book or journal so rare that it would be hard to find in most typographical special collections departments.

That Steve was an active 24-year member of the Letpress Listserv and 12-year member on the online printing forum Briar Press,[9] also attests to his academic generosity. Combing through his countless replies to printing newbies and seasoned printers alike, many of them hopefully casting to the internet for information, one notices first the respectful nature of his tone regardless of the questions’ simplicity and secondly, the thoroughness of his answers. In 2010, he started scanning photos from his collections to share freely on Flickr[10].

Great collectors of one genre of things often branch into related collecting pursuits, and Steve was also of this ilk. His private collection of uncommon type specimens, numbering over 250 volumes, is brilliantly illuminated by its paired metal type collection, which is comprised of over 400 rare 19th-century metal fonts. He also amassed an impressive collection of ephemera, including leaves of incunabula and fine press editions, as well as samples of obscure printers’ billheads. In 1984, he donated a collection of typesetters’ composing sticks to the National Museum of American History in Washington. And, as he expanded his knowledge through collecting, Steve continued publishing. A later book published in 2009 that is particularly related to his type collection is Nineteenth-Century American Designers and Engravers of Type,[11] where he and Alastair Johnston compiled and edited a series of articles first issued by William Loy in the trade journal, The Inland Printer, from 1898 to 1900. Steve illustrated this book with hundreds of type specimens drawn from his own collection. Largely because of his contributions, it remains the best book yet published on 19th century American type.

Steve continued to be active in his late retirement. His most recent in-depth article on The Bruce Pivotal Typecaster appeared in 2016 in the Journal of the British Printing Historical Society.[12] Shortly before his death, he had written chapters for a forthcoming book, called “A Trilogy on Typecasting,” which will be co-authored with type-caster Richard L. Hopkins, printing history educator Raymond Stanley Nelson, Jr., and Dr. MacMillan.

Stephen O. Saxe was the son of Helen Fields Saxe and Leonard Spier Saxe,[13] and brother of the late Robert Leonard Saxe.[14] He was predeceased by his wife, Patricia Singleton Saxe.[15] He was cremated and buried in the family plot at Temple Israel Cemetery, in Hastings-on-Hudson, New York. Steve was a gentleman and a scholar; a friend to many, and a generous colleague.[16]

[9] Terry Oakes, founder of the Letpress Listserv at the University of New Brunswick, Canada, confirmed that he started the listserv on January 25, 1995 and Steve posted on it that same day. Email correspondence with author, June 25, 2019. “About Stephen O. Saxe,” Briar Press, http://www.briarpress.org/user/29 (Accessed June 25, 2019).

[13] An interesting side note is that Leonard Spier Saxe (1899–1968), was a distant relative and attorney for songwriter Ira Gershwin. Saxe, Leonard Spier, and Ira Gershwin. Ira Gershwin files from the law office of Leonard Saxe. 1935. Manuscript/Mixed Material. https://lccn.loc.gov/2010561020.

[16] Many thanks to Karen Horton, David MacMillan, and Tracy Honn for assisting in writing this obituary.

RIP: Stephen Crook by Announcement. “Isaac Gewirtz, of the New York Public Library, has asked that this sad news be forwarded to APHA members. On December 8, Stephen G. Crook, a…”