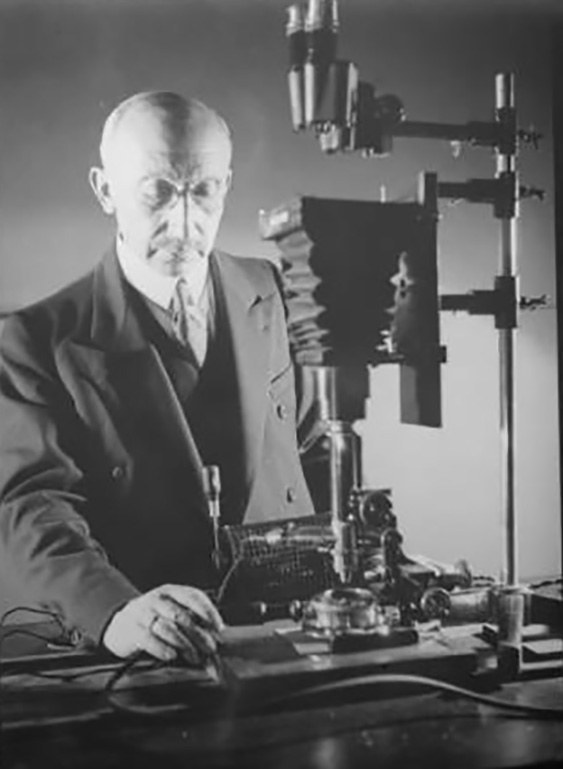 The Spectral Arts of Dr. Lodewyk Bendikson at the Huntington:
A Presentation by Laura Stalker, Avery Deputy Director of the Huntington
Library and John Sullivan, Head of Imaging

“Any sufficiently advanced technology is indistinguishable from magic.” 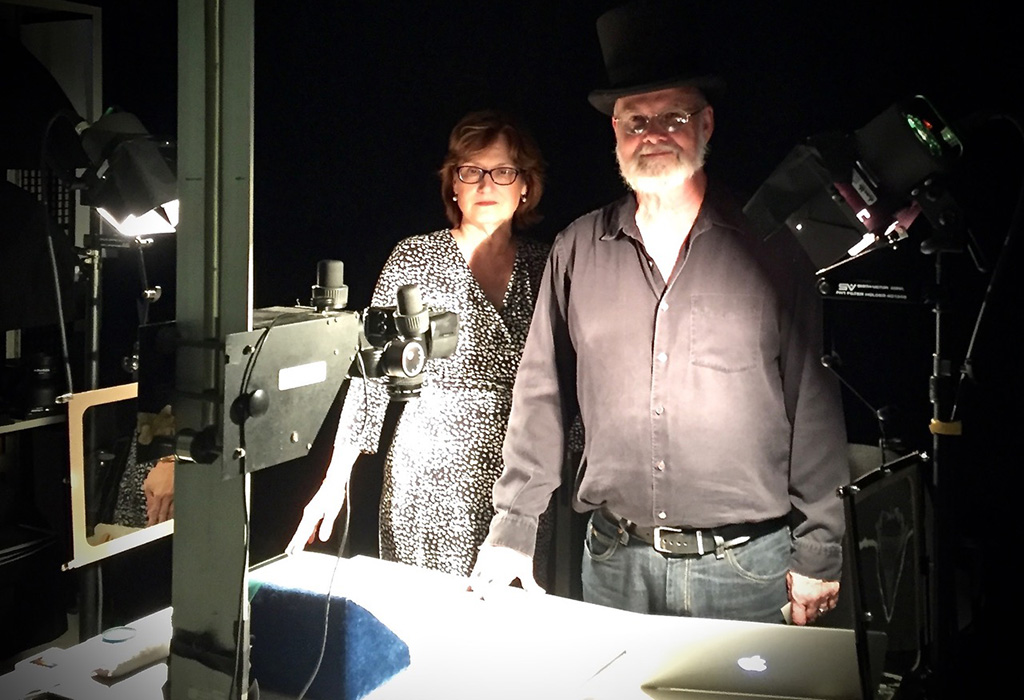 Dr. Bendikson was one of the earliest employees to join the Huntington Library staff in New York in 1916 and, subsequently, he made the move to the new location in San Marino. His early days at the Huntington Library coincided with the rapid development of photographic technology that was beginning to be widely used for document copying. By 1928, he was appointed head of the Department of Photographic Reproduction that eventually evolved to serve the needs of the entire institution including the art gallery and gardens as well as the library.

Over the next two decades, Dr. Bendikson continued to make significant contributions to the field of document copying, including use of Photostat copies and microfilm. He also developed pioneering techniques that advanced the use of forensic photography. John Sullivan, Head of Imaging, and only the fifth person to occupy this position, demonstrated (with his magician’s top hat in place) several of Dr. Bendikson’s most important contributions. Utilizing the art and science of photography and employing infrared and ultraviolet light sources he was able to display, as if by magic, how “what is hidden may be revealed”. One of the most dramatic of several demonstrations prepared for the tour group involved a page from the handwritten autobiography of Benjamin Franklin, 1771–1790. Most of the text on one of the pages from the Franklin manuscript was obliterated by a large ink spill. Mr. Sullivan was able to demonstrate that the entire original text underneath the ink spill was revealed by employing photography and spectral analysis techniques advanced by Dr. Bendikson and still in use today. 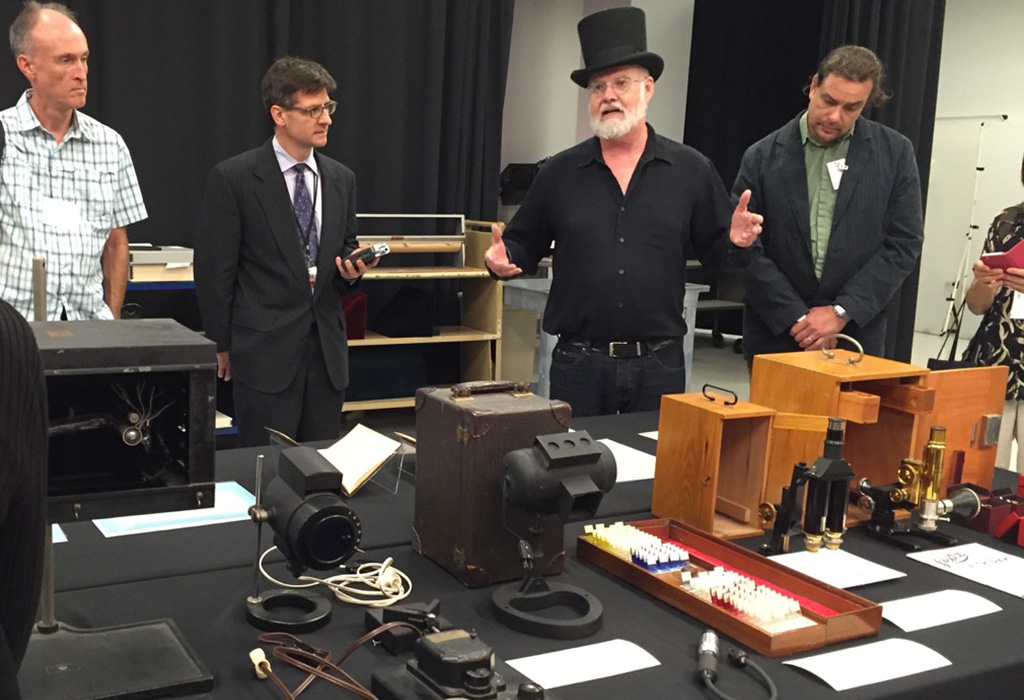 Artifacts from the early days of the Lab including a palimpscope in the foreground. (Vicke Selk)

At the close of the presentation and demonstrations, Mr. Sullivan led the group through an exhibit of historical artifacts in use during Dr. Bendikson’s tenure at the lab including tools invented by Dr. Bendikson (e.g. the palimpscope, a light-weight portable ultra violet light source). John also led a tour through the current lab noting that the physical space is partitioned by use of blackout curtains, rather than walls, in order to maximize flexibility of space use. The group observed the large-scale photography set up, a copy of the Ripley alchemical scroll on display, the digital laboratory and office area. John was of the opinion that Bendikson would be pleased and excited by the technology in use in the Imaging Lab today. 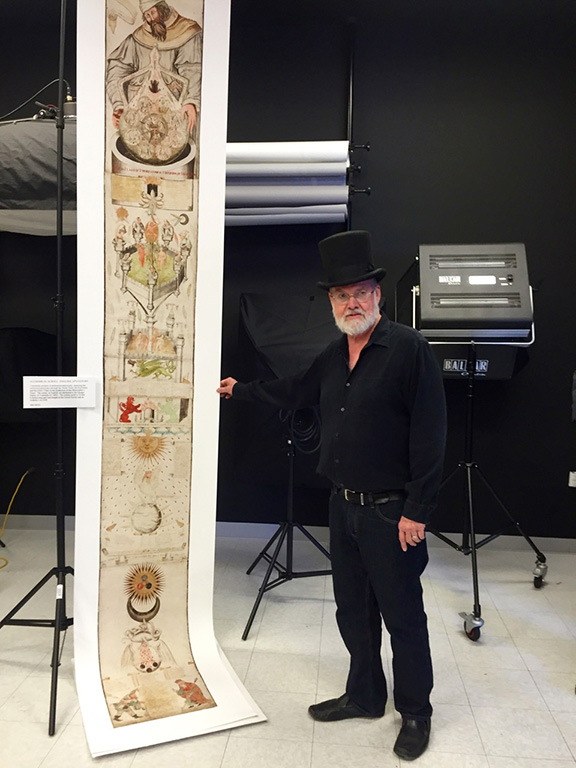 A copy of the Ripley alchemical scroll on display. (Vicke Selk) 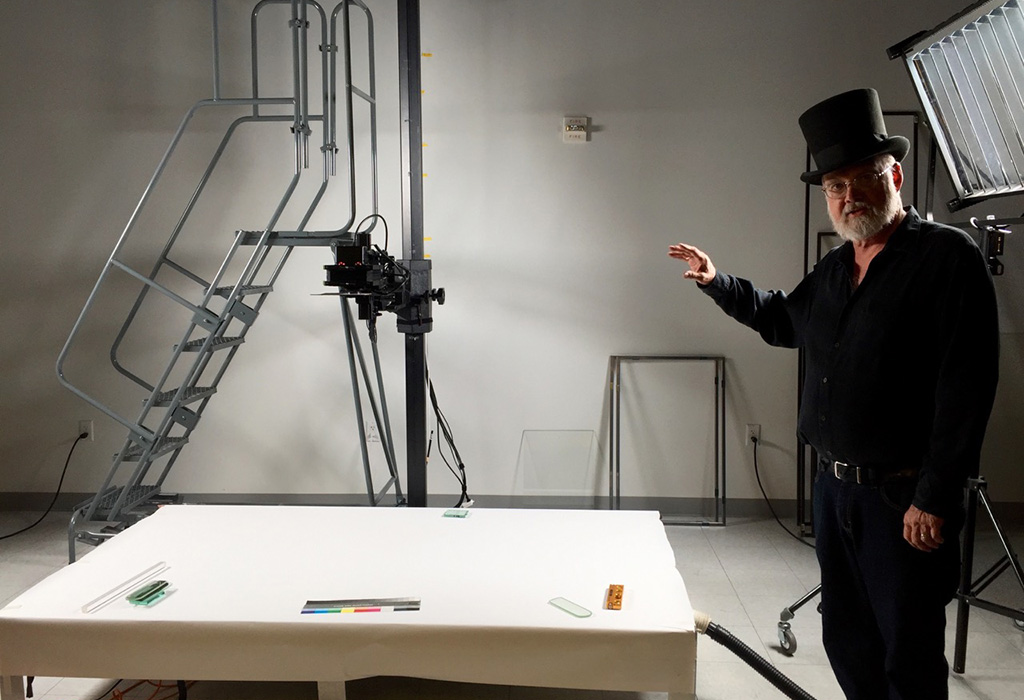 Vicke Selk is in the process of reinventing herself as a fine design binder and letterpress printer after a long and successful career in higher education administration. She is currently enrolled at the American Academy of Bookbinding in Telluride, Co. where she has studied with Don Glaister, Suzanne Moore, Peter Geraty, and Hélène Jolis. in addition, she takes private lessons with design binder Marilyn Bonaventure in Orange, CA. She has taken classes in letterpress printing at the San Francisco Center for the Book and has regularly participated in printing workshops offered by the Scripps College Press. She completed her first commission for a private client in 2014 designing, printing and binding five unique handbound books with full and 1/2 leather design bindings. In 2016 she participated in the Guild of Book Workers California Chapter Member Exhibition currently on display at the Geisel Library at University of San Diego. She is a member of the Guild of Book Workers and the American Printing History Association. She works out of a small studio adjacent to her home in Claremont, CA.