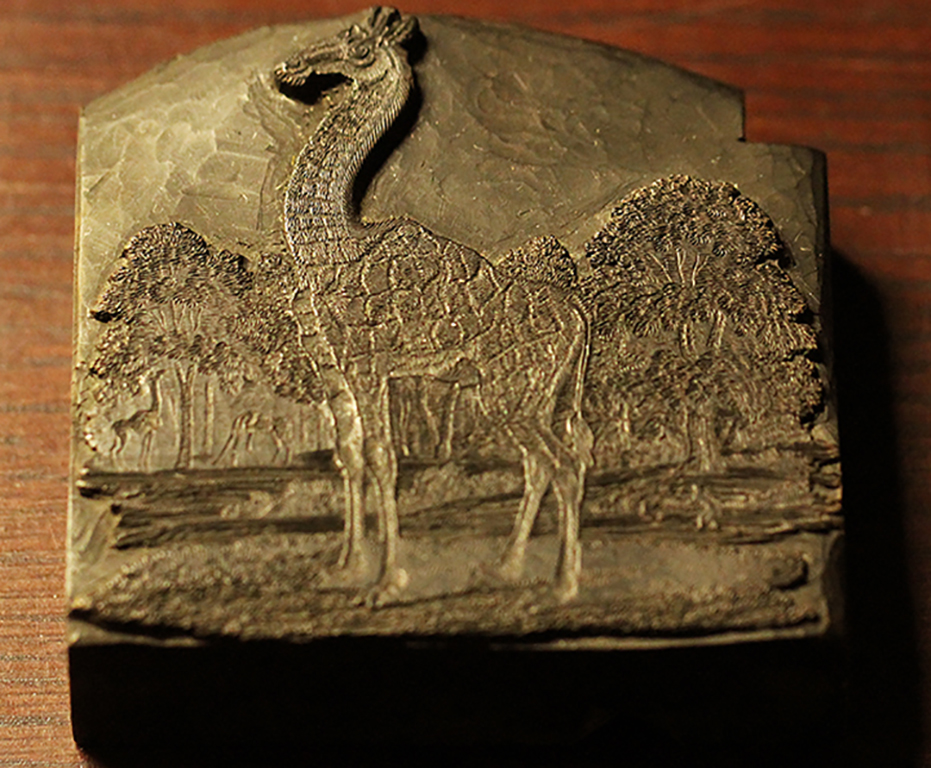 Todd Samuelson discussed how multiples—separate blocks for the same woodcut illustration—can reveal common woodcutting practices and the interactions between artist and printer. He showed three examples: Thomas Bewick’s engraving of a giraffe (or cameleopard), two blocks for the Ashendene Press edition of Le Morte d’Arthur (1913), and Josiah Wedgwood’s famous Abolition of Slavery wood engraving. Samuelson discussed how Bewick’s 1790 print of the cameleopard does not match the woodblock, and that the block is from the 8th edition. The image apparently went through a few iterations and the 1790 print has a much more giraffe-like pelt than the earlier woodcut, which appeared to be inspired by leopard print. Additionally, the final print was still taking liberties with the giraffe, as it was placed in a lush English landscape surrounded by sportsmen.

The 1913 edition of the Siege Perilous image in Le Morte d’Arthur differs completely from a rejected block which remains extant, together with the approved block, showing that the printer wanted the image entirely recut. The Library of Congress’s printed broadside of Wedgwood’s pro-abolitionist woodcut does not match the block, which, when printed, has a filled-in background. When viewed closely, the block has some nicks that may have been caused by a routing machine, which may have caused the artist to throw it out and start over. Samuelson concluded his presentation by suggesting that we can develop our understanding of practices of the past by collecting and examining realia. 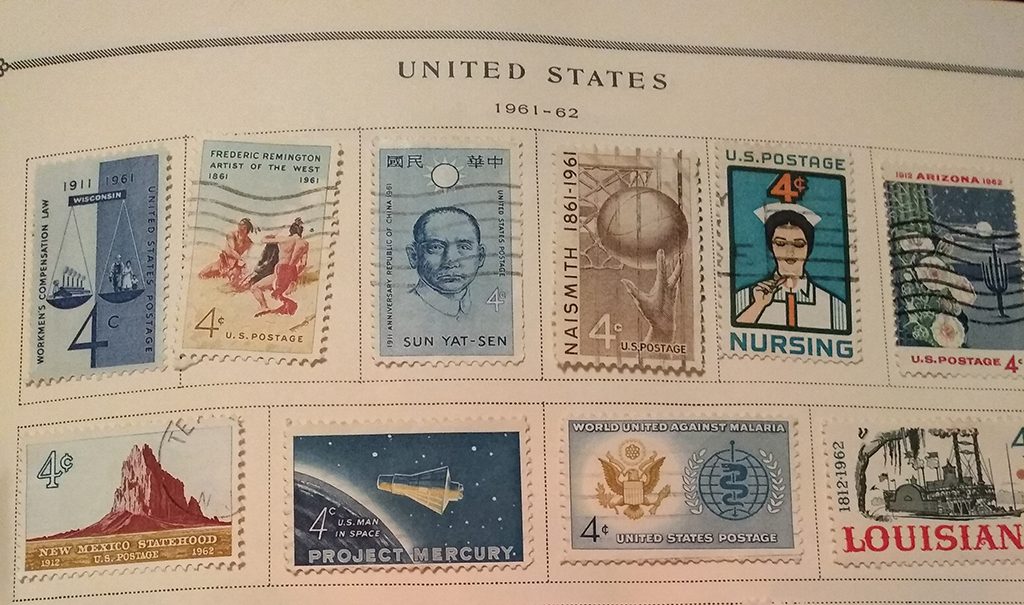 Some United States stamps from the early 1960s (Rob Cagna)

Robert Cagna began by handing out stamps to his audience in delightful little glassine envelopes. The image on one of my stamps mimicked a hideous cross-stitched snowman. He told us that the historical percentage of stamps on handmade paper, compared to stamps on machine-made paper, was low, but that stamps have been printed on every type of paper imaginable. Cagna went over the history of notable stamps including the first postage stamp: an 1840 “Penny Black” with an image of a very young Queen Victoria printed on a Jacob Perkins’ Press. He listed off several more notable historical stamps from all over the world and briefly discussed the imagery on them, then talked about the Mail Art phenomenon in the 1960s that came out of Dada, where artists would put stamps on anything they could find and see if they could make it through the post. Mail artists often made their own stamps, but Cagna warned us it’s a federal offense to use them in place of official government postage. He discussed proto-stamps called carrier stamps, that were used only to get a letter from the post office to home and vice-versa; handmade Civil War envelopes; and the very interesting example of the Latvian stamp made from German maps. 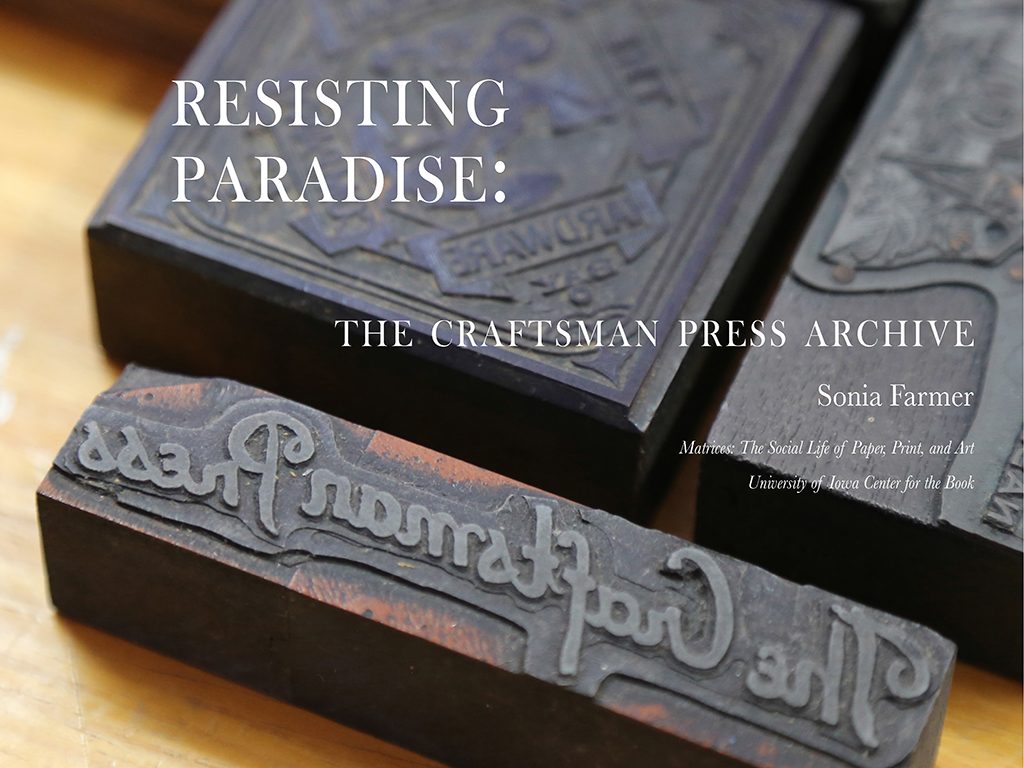 The final presenter, Sonia Farmer, discussed what it’s like to have your hometown be someone else’s paradise. Farmer is from Nassau, the Bahamas, a notorious tourist port. She talked about how paradise has no past and how it has to exist in a state of purity for tourists to discover—a state of problematic exoticism rooted in colonialism. It doesn’t feel like it belongs to the people who actually live there. Farmer acquired a press some years ago from a local printing business, the Craftsman Press, and when she started using it, she discovered blocks of the logos of local businesses that no longer exist in Nassau. After sharing them around, she started receiving stories from people who have lived there for generations. She realized that this was a way to disrupt the created narrative of paradise with the very real narratives of the people who live there. Craftsman Press is steeped in local history, as it did job printing at all levels, but also for the political activity of the press’s owner. Farmer has now taken the prints and the stories of local Bahamians and started her own press and a digital project she is calling The Craftsman Press Archive. She wrapped the presentation up by emphasizing the idea that it is a political act to give a history and a narrative to a paradise that is supposed to be unconscious.

Zoe Webb is an MFA candidate at the University of Iowa Center for the Book.