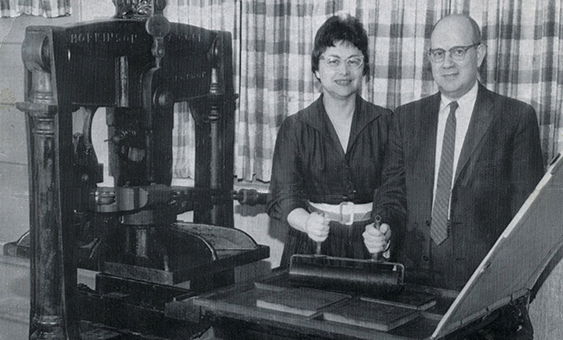 The Kelmscott/Goudy Press, the Albion iron hand press No. 6551 once owned by William Morris in England and Frederic W. Goudy in New York, will be auctioned by Christie’s on December 6 in New York City.

The press, manufactured by Hopkinson & Cope in 1891, was installed at the Kelmscott Press in 1895 and specially reinforced to produce the oversized Chaucer in 1896. Morris died that year and the press passed into several hands before Goudy brought it to the United States and to his Village Press in 1924.

For more than a century the K/G Press, as it came to be known, has been a symbol of the private press movement in the United States. Goudy revered it, writing that his “acquisition of this press should be sufficient reason to insure for the Village Press a very definite mention in the annals of American printing.”

In late 1960, the press was acquired by my parents, Elizabeth and J. Ben Lieberman, and their Herity Press. Ben Lieberman (1914–1984) was founder of the American Printing History Association. He was a tireless proponent of the private press movement, viewing private press printing both as an art form and as a significant means of defending freedom of the press. In that spirit, he was also founder of the American printing chappels movement and a member, among others, of the original Moxon Chappel in California in the 1950s. For four decades the press resided in the Liebermans’ home, first in White Plains, New York, and later in New Rochelle. Hundreds of people came to visit it, set their names in type, and print a personalized bookmark. One of the visitors was Alfred A. Knopf, who confessed that it was the only time he had ever set type in his life. All of those who printed on it during those years signed a special guest register, which will be included with the press at auction.

When my mother died in 2001, my wife and I inherited the press, and it has remained with us in Ardsley, New York, since then. After 53 years with our family, it is time for its next journey, and for an owner who will put it back to work. The press will be available for viewing between November 30 and December 5 at Christie’s, 20 Rockefeller Plaza, on 49th Street, between 5th and 6th Avenues. For further information about the auction, call Christie’s at 212-636-2665.

Son of Elizabeth and J. Ben Lieberman, Jethro K. Lieberman began setting type at the age of nine in his parents’ printery at their Herity Press. Today he confesses to paying more attention to electronic production than to lead type. He is professor of law at New York Law School, and the author of many books. His most recent is Liberalism Undressed (Oxford University Press). For the past dozen years, he and his wife Jo Shifrin have maintained the Kelmscott-Goudy Press at their home in Ardsley, New York.