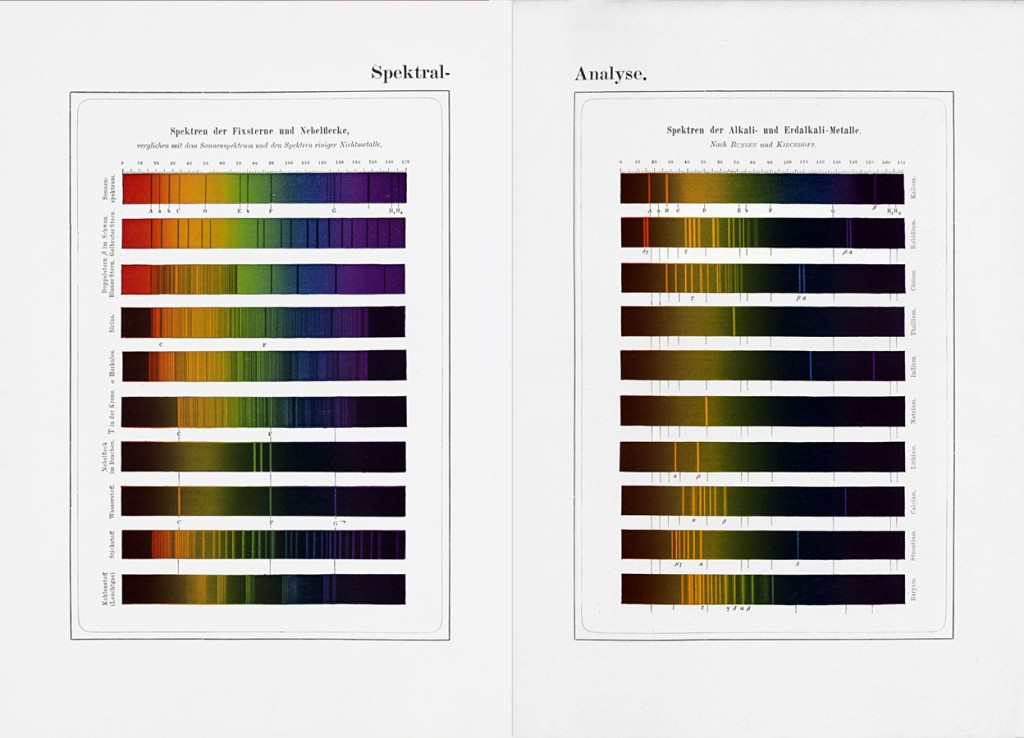 In my book  The Rise and Fall of the Printers’ International Specimen Exchange  (Oak Knoll Press, 2012), I showed in 4-color-process a specimen of two color analyses from Volume IX of the Exchange: one of the stars, the other of alkali and alkaline earth metals. Only the first three volumes of the Exchange included notes on the specimens; details about later specimens were difficult to come by, and for most of those I listed only contributor names as they appeared in the volumes. Several months after publication, however, I came across the following description in the British Printer, which I offer here as an addendum. The BP article begins as a review of the book Colour by A.N. Church and, after mentioning a specimen by A.V. Haight, the writer (probably editor Robert Hilton) devotes the rest of the notice to an admiring explanation of the “Spektral-Analyse”:

In the current volume of the Specimen Exchange there is, however, a still more wonderful example of economical colour printing. It represents a complete table of spectral analysis—i.e., the colours red, orange, yellow, green, blue, indigo, and violet, with the numerous shades made by mixing them together—and was printed in two workings only, at the well-known Bibliographic Institute at Leipzig. It was done on a common cylinder letterpress machine in iris printing, as in Germany is called the manner of colour work, where, like in the rainbow, one colour melts into the neighbouring one nearly imperceptibly and without any marked border line. This result is generally arrived at by reducing the to-and-fro motion of the wavers [ink-distributing rollers] to a very narrow distance, but in the case of our specimen, that limitation had also to be a most precise one, as the effect to be obtained was not a pictorial, but a scientific one; every line in the colour blocks had to show off in its particular and distinct colour or shade. As an instance, the line D—about the fourth of a pica in width — in the narrow colour block Natrium on the specimen must be yellow, whilst the line A in Calcium, the next block but one, is of orange hue, etc. In consequence of this, the sideway motion of the wavers had to be shortened, and this was most effectually done by a very simple device, regulating the motion of distributing cylinder and wavers from 3 to 40 millimeters. But such an arrangement would not have proved sufficient in itself to keep colours put closely side by side from mixing entirely, or to arrive at a perfectly irisated effect. Cutting out the vibrator in narrow rings, separated by grooves of the width of from 4 to 5 millimeters, was therefore resorted to, and the final effect is shown in the specimen, which has been done in two workings only, the irisated colours forming one working, and the black one the other. Such lessening the number of workings is certainly of great business importance, when the numbers to be printed are so high as in the case of Meyer’s Conversations-Lexikon (from which it is taken), the circulation of its fourth edition (16 stout volumes) reaching now nearly one hundred thousand copies.

Matthew McLennan Young is a graphic designer and book collector. Among his other titles is Field & Tuer, the Leadenhall Press, (Oak Knoll Press, 2010). He spoke at the 2013 APHA Conference in New York City and was a presenter at the 2009 APHA Conference in Newport, Rhode Island. He wrote the article "The Rise and Fall of the Printers’ International Specimen Exchange" in Printing History, New Series Number 8 (July 2010).

ISO: Cause of Postage Stamp Plate Alteration by Site Visitor. “Via the contact form: I have a British 1d Penny Red stamp from the 1860s in my collection with the numerals 77 in the left…”