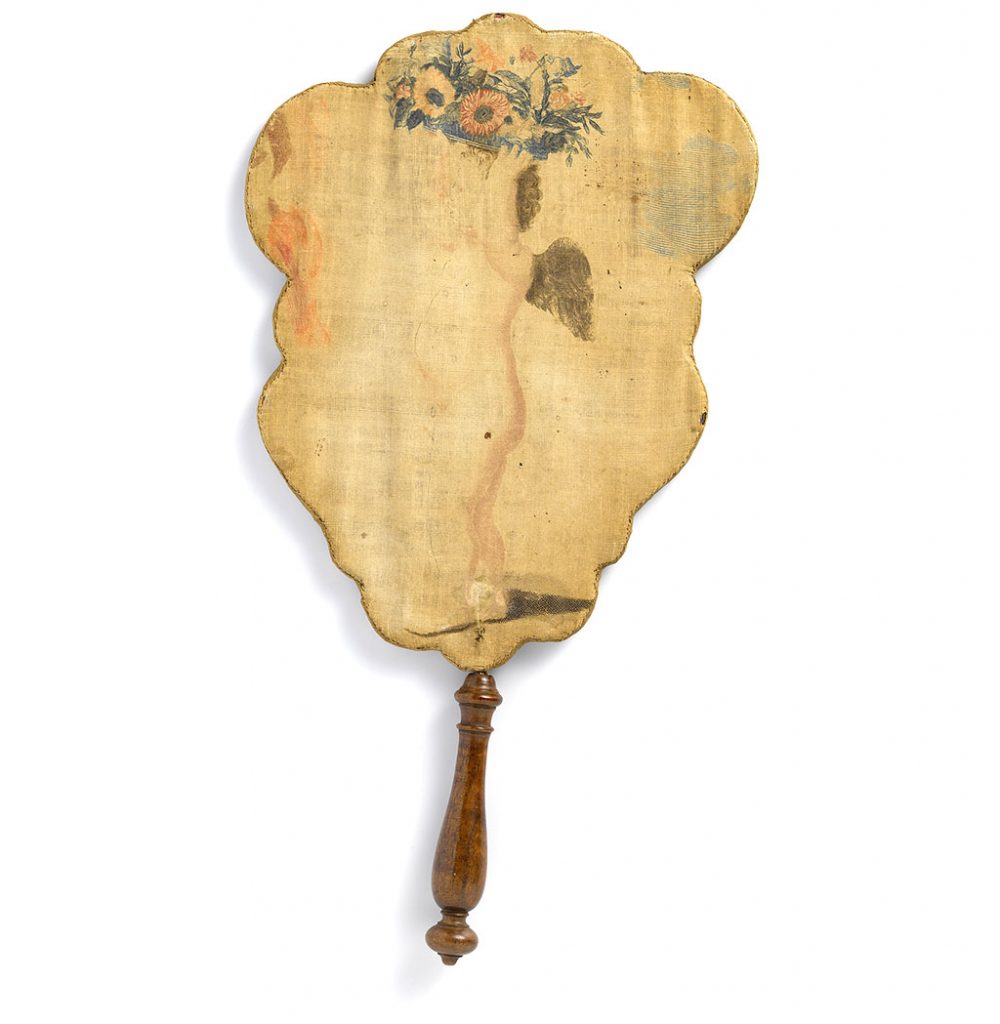 Inking one printing matrix in two or more colours is called à la poupée inking, after the small ink ball or dolly (poupée) used in the process. The earliest known example of a metal relief matrix printed in more than one colour is a large typographic initial “D”, its left half inked in blue and its right half in red, found in the Rylands Library copy of the 1457 Mainz Psalter published by Johann Fust and Peter Schoeffer.1 À la poupée inked relief printing remained rare, while various examples of engravings and etchings inked à la poupée in two or three colours, both for single-leaf prints and book illustrations,2 are found in the sixteenth and seventeenth centuries. Then Johannes Teyler—not an artist or engraver, but educated as philosopher and mathematician, while professionally active as a military engineer in the Brandenburg service—developed à la poupée inking in multiple bright colours and employed a workshop with designers, engravers and plate printers that were active in Holland from ca. 1685–1697.3

Compared to earlier intaglio colour prints and the production of immediate followers, characteristic for the prints from Teyler’s workshop are their advanced technical qualities. The inking is more sophisticated, not just simply filling in one area of a plate with one colour, but with local tone gradations depending on what is required at that particular part of the design. Teyler’s plate printers were so skilled that they could ink and wipe an area as small as 2 mm squared in one colour within an area of another colour. A further specialty of his printers were marbling effects, i.e., gradual changes from one colour into another, a technical feat never to be repeated by Teyler’s immediate followers. And above all the colours were bright with glowing yellows, burning reds, vivid oranges, lush greens, cool turquoise blues, deep purples, luminous pinks, ranges of browns and with black accents.

Teyler applied for a privilege on his “new method” on 6 February 1688, which was granted by the States of Holland and West-Frisia on 20 February 1688,4 which meant that his invention was ready for official approval. The text of the application details the various aspects of his business plan (in English translation):

Thus is shown by Johan Teyler that he [the] suppliant has invented a certain new method to represent on paper, parchment, satin, silk or other fabric [emphasis by author], in the form of maps, books,5 cloths and otherwise, all kinds of figures, ornaments and in particular armies, encampments, sieges, battles, fortifications, military exercises, and so on, with their colours … [etc.].

The activities of the printshop were also described in an advertisement in the Amsterdamse Courant of 7 December 1690, referring once more to the printing on fabric:

The advertisement states that Teyler was resident in Amsterdam then. Soon after he moved to Rijswijk, a village south-east of The Hague and at least from 1694 until May 1st, 1696, when his rental contract ended he organised a workshop in the country house Te Blotinge in Rijswijk.6 Here a number of visitors witnessed Teyler’s textile printing business.

Word about Teyler’s new activities had already spread by 1690. In a letter dated 14 (= 24) September of that year by Gottfried Wilhelm Leibniz to Giusto Ciampini mention is made of an unnamed engineer who published an algebraic booklet on the art of fortification who now has a business in Holland for printing silk in colours from copper plates, in other words our Teyler.7

The famous Leibniz certainly knew about Teyler’s activities and abilities. This is evident from correspondence between Leibniz and the Dutch mathematician Christiaan Huygens concerning finding a new teacher in mathematics for the Wolfenbüttel princes in 1694. Leibniz suggested Teyler for the post, but did not know his name and described that the person he was looking for was a mathematician who had been an engineer in the Brandenburg service and had a “business for intaglio printing fabric.”8 Huygens replied to Leibniz on 29 May 1694 that this was Teyler, who lived about a mile away from him and that he had seen Teyler involved in his textile printing business when visiting him.9 He repeated this in a second letter to Leibniz ten days later.10

Leibniz put more pressure on Teyler when some time afterwards the Wolfenbüttel chancellor Philipp Ludwig Probst von Wendhausen traveled to The Hague. Von Wendhausen met Teyler and urged him to come to Wolfenbüttel to take the position of teacher in mathematics.11 He will have seen Teyler’s printing business because he also asked him to send samples of his workshop to Wolfenbüttel, which Teyler refused for not being seen as begging for the position.12

In late December 1694 Johann Daniel Kraft, an advisor of Leibniz, visited Teyler at Te Blotinge and referred in his letter to Leibniz to Teyler’s factory for wall hangings about a week later.13 Kraft thought that Teyler had made a mistake with his business in which Teyler stated to have made the considerable investment of more than ƒ100,000. Kraft’s opinion was that Teyler’s work looked nice, but that he agreed with Huygens who had said to him that what Teyler made with all kinds of colours was not lively enough. Kraft preferred the prints of Maria Sibylle Merian that he had seen in Amsterdam.

Teyler’s work was also known in England amongst a few vanguard collectors. Thomas Herbert, 8th Earl of Pembroke and 5th Earl of Montgomery, plenipotentiary of Great Britain at the Peace Conference in Rijswijk in 1697, kept an album in his print collection with “the different Masters & Inventions in Etching & graveing” that contained one print by “Mr Tayler a Painter, who improved the printing of Stuffs in Holland.” as Herbert wrote underneath. Samuel Molyneux saw the album in the period October 1712–April 1713 and noted that Teyler’s print was made “in different colours.”14 Herbert may have acquired the print during his stay in Rijswijk in 1697, maybe even in direct contact with Teyler, but at least he was informed that Teyler printed on “Stuffs,” i.e., on fabric.

When the complete inventory of Teyler’s workshop was auctioned in Rotterdam the announcement in the Amsterdamse Courant of 25 February 1698, next to the copper plates, specifically referred to “printed wall hangings, pavilion and bed hangings, and a quantity of printed silk, cotton and dimity textiles.”15 A further announcement of 8 May, for the second part of the auction, referred to “the remaining copper plates, the printing press, the calendering press [for smoothening sheets of fabric], printing equipment, engraved copper plates, presses and tools, furthermore including printed fabric wall hangings and printed silk, as well as ceramic and plaster casts.”16 Preparations took more time and the second auction was postponed to 22 May, as announced on the 10th that would be offered for sale then: “engraved copper plates, printing presses, printer’s equipment, printed cloth, and ceramic and plaster casts.”17

The description sounds as if both finished materials, such as bed hangings, as well as semi-finished products such as printed silk were offered, although unfortunately none can be identified by lack of a catalogue.

No other references to his printing business from Teyler’s lifetime seem to have survived, until the artists’ biographers Van Eijnden and Van der Willigen (1816) explained that Teyler printed his plates on white linen, which when on stretchers could serve as small paintings, while joined together they could serve as wall hangings,18 also claiming to have seen one of his wall hangings printed on linen in Nijmegen.19

All witnesses refer to the printing on fabric, but curiously enough the actual production activities of the printshop are never described. The printing on fabric, as mentioned by his contemporaries, may have been a core activity. With the printers working in a beautiful country house in Rijswijk,20 an area with estates and manor houses, including those of king-stadholder William III, and close to The Hague with its diplomats, Teyler must have aimed at the high end of the market: colourfully printed, fashionable silk wall, pavilion and bed hangings for the rich and well-to-do. With his background as a former courtier at Brandenburg he may have had the right contacts for it. 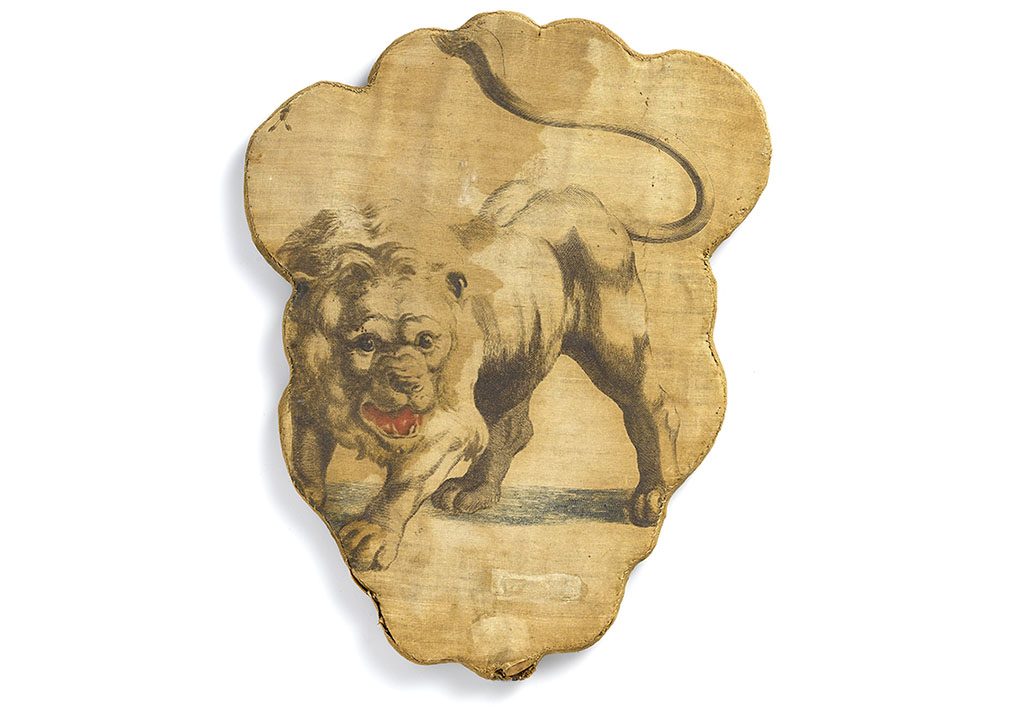 But where then is all this printed fabric? Certainly, it was up for auction in 1698, seeing the advertisements in the Amsterdamse Courant. Extant examples are two hand fire screens in the Rijksmuseum, a mirror-imaged and double-sided shaped pair to be used by two persons sitting at both sides of a fire place, protecting the sides of their faces with the hand screens (Figs 1, 2).21 They are arguably not objects to make a flourishing business and more likely an eighteenth-century domestic reuse of a remainder of Teyler’s printed fabric, seeing how stained and discoloured they are.22

Recently another piece of printed silk from Teyler’s studio was acquired by the Yale University Art Gallery in New Haven, an impression of The Rape (Abduction) of Proserpina.23 A piece of colour printed silk from the same group with Phaeton Driving Helios’s Sun Chariot turned up in the Herzog Anton Ulrich-Museum, Braunschweig (Germany) in 2016.24 It is as meagre as it is tantalising. Apart from these examples, nothing similar has been found in any other printroom. Searching collection catalogues were unsuccessful, enquiries made with textile conservators did not lead to any results and references to Teyler prints on fabric are absent in handbooks on textile history. Hopefully, the materials are kept with other anonymous textilia and a future search would mean scrutinising box after drawer using the New Hollstein (Teyler) volumes as a guide, in the hope of discovering anything else.

Dr Ad Stijnman (PhD University of Amsterdam, present affiliation University of Leiden, Fellow of the Royal Historical Society in London) is an independent scholar for historical printmaking processes, specialising in manual intaglio printmaking techniques. He lectured and published widely on the subject, including his seminal Engraving and Etching 1400–2000: A History of the Development of Manual Intaglio Printmaking Processes (2012), for which he was awarded the Karel van Manderprijs for outstanding Dutch art historical publications. Together with Elizabeth Savage he co-edited Printing Colour 1400–1700: History, Techniques, Functions and Receptions (2015). His curatorial activity includes exhibitions on medieval prints, early modern colour prints and Rembrandt etchings on Japanese paper.