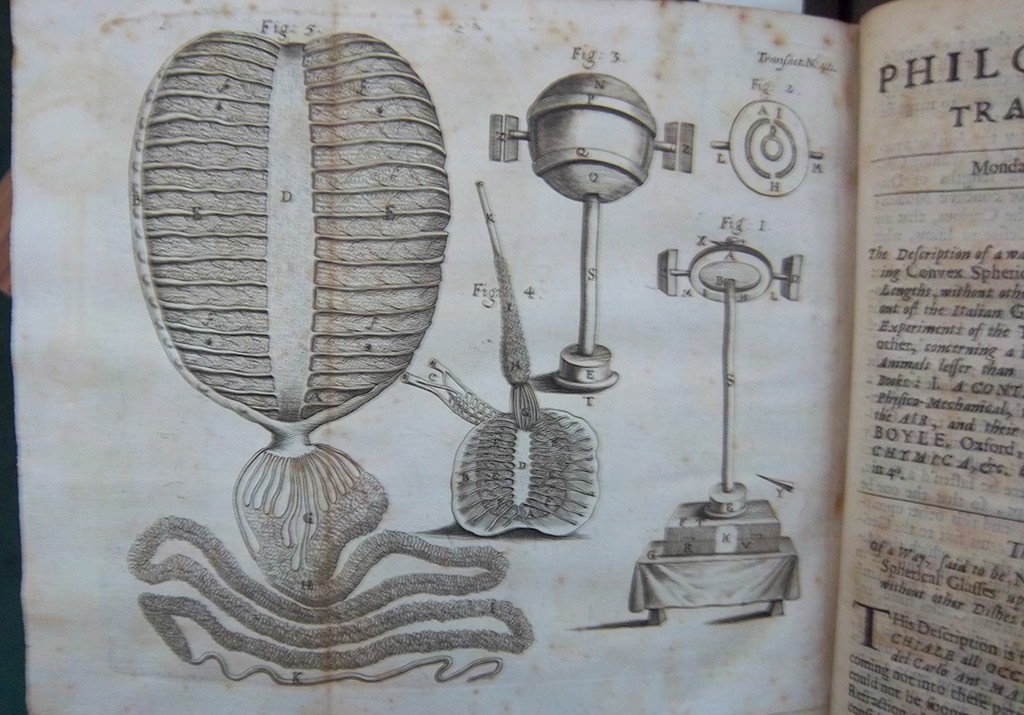 A microscopic organism and a camera obscura, Philosophical Transactions of the Royal Society of London, No. 42, Monday, December 14, 1668. (Leslie Smith)

[King was unable to attend the conference; her presentation was not delivered]

Leslie Smith’s research of seventeenth-century oddities in print embarked from a desire to map thought and to understand both the process of seeing in private versus public, and how that seeing is represented from a historical perspective. To do this, she studied diagrams, drawings and plates from texts that described accounts of curious observation, like in Nathaniel Crouch’s (Richard or Robert Burton, pseud.) The Surprising Miracles of Nature and Wonder (1683). In one such plate, spectators are publicly observing an array of cosmic spectacles in the sky—blazing stars, light rays, and clouds. The method used to depict these spectacles informs contemporary viewers of the visual experience itself, as does the way in which the onlookers are shown huddled in groups, with their fingers pointed towards the sky, informs us of the historical experience of observation.

In Crouch’s time, and perhaps still today, the pursuit of knowledge started as a private endeavor but held the intention of being shared with the public. In Micrographia (1665), Robert Hooke closely observed and described the eye of a housefly as a “multitude of several hemispheres.” In these spheres he saw a reflection of his study—landscape all too familiar to him—but when observed in this way, the room took on an uncanny view, as something unknown yet familiar, as a natural philosopher’s insight into multitudinous perceptions of reality.

Smith also spoke of people’s voracious appetite for absurd phenomena and “terrible prodigies,” like plagues, volcanic eruptions, and monsters. Inside the August 10, 1683 edition of The Philosophical Transaction, is a recounting of a woman’s stillbirth and afterbirth, described as a “mash of fleshy parts,” which attracted people in hordes, including natural philosophers who viewed the oddity as scientific inquiry.

In her work in print and book art, Smith seeks to create an image of the experience, much like these seventeenth-century observers sought an image of an object—whether it be the eye of a fly or a falling star. She takes stylistic cues from these texts to give a shade of historic, scientific exposition to her work of representing the invisible, immaterial human senses. During the course of her presentation, Smith explored what these senses might look like, both in space and in the body. For instance, wonder as a cognitive passion that begins in the heart and makes its way into the mind, or remains in the heart and transforms into awe and fear.

The first question posed by the audience was a call for Smith to reflect on the process of needing to obstruct the object being observed in order to, in fact, observe it or understand its perspective. Smith said that she began on this artistic/historic path of exploration and expression by doing collage work, by finding paper ephemera, being captivated by it, and then cutting it up and rearranging it to find meaning. In this way and many others, paper and printing speaks—it has information or a story to tell and it is our pleasure to discover a way to listen.

Ruby Carlson is the Co-Curator at the Velaslavasay Panorama in Los Angeles, working in facilitating and supervising presentations and exhibitions, and the appointed Secretariat of the International Panorama Council, an organization of enthusiasts, scholars and professions in the field of 360-degree painted panoramas. She also studies Lacanian psychoanalysis at P.L.A.C.E., and is a freelance writer.