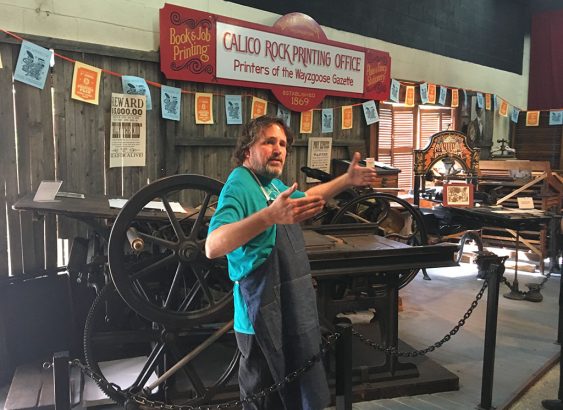 Working Tour at the International Printing Museum in Carson

Mark Barbour, Founding Curator and Executive Director of the International Printing Museum in Carson, California, led us on a three-hour tour of the museum’s exhibition space. The huge, high-ceilinged building is packed with an impressive array of working nineteenth- and twentieth-century presses and printing tools, yet houses only a portion of founder Ernest A. Lindner’s Collection of Antique Printing Machinery, as quite a few pieces remain in storage due to lack of space. 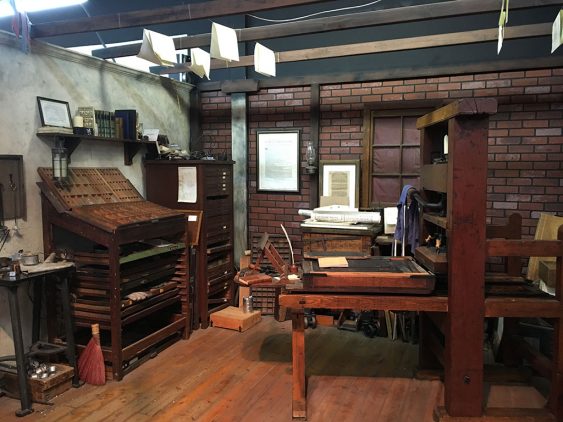 A reproduction of an early American print shop. (Jess Touchette)

In keeping with the magical theme of this year’s conference, we began our tour peering into the eighteenth-century at a re-creation of a colonial printing office featuring an 1806 Ramage Press—the third oldest American wooden press—donated by Rand McNally of Chicago. (Behind us  the fifteenth-century was represented by a reproduction of Gutenberg’s press.)  Standing in “Franklin’s” workshop, Barbour led us through a rough chronology of early printing, emphasizing the craft’s Asian origins. First, he passed around a Chinese woodblock, describing the process by which a page’s worth of characters had been carved into each side of a portion of the plank. Then, he showed us an example of Korean movable type, recently acquired during the Inaugural meeting of the International Association of Printing Museums in South Korea. This type was made through sand casting, a process that predates Gutenberg’s method by roughly 75 years.

From there, Barbour took the narrative to Europe, demonstrating first how to use Gutenberg’s typecasting innovation (the type mold), then how to print a reproduction of an early wooden screw press. Using thick, glossy ink and a roller (rather than period inking balls), Barbour “pulled the devil’s tail” to replicate a page from Gutenberg’s B42. 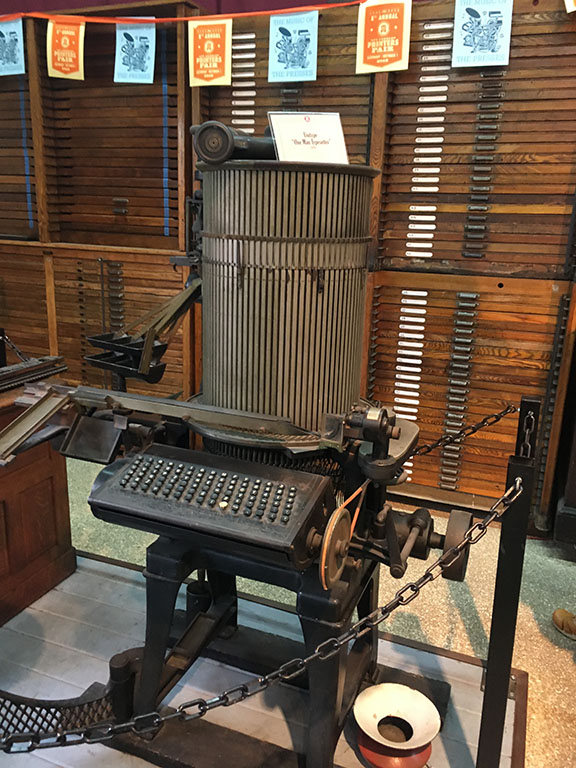 The Unitype Typesetter of 1890 allowed a keyboard operator to set type more efficiently. The machine was made obsolete by the more commercially successful Linotype, and most models were destroyed. (Jess Touchette)

Barbour then led us on a tour around the remainder of the museum’s exhibit area, introducing us to a variety of later presses. These ranged in function and design from a rudimentary proofing press to a Washington Hand Press from the 1880s. We also saw a range of typesetting machines, including a cylindrical Unitype (designed in 1887); a 1900 Typograph, with its characteristic fan of wires down which individual characters would zipline; and a Linograph (introduced in 1912). 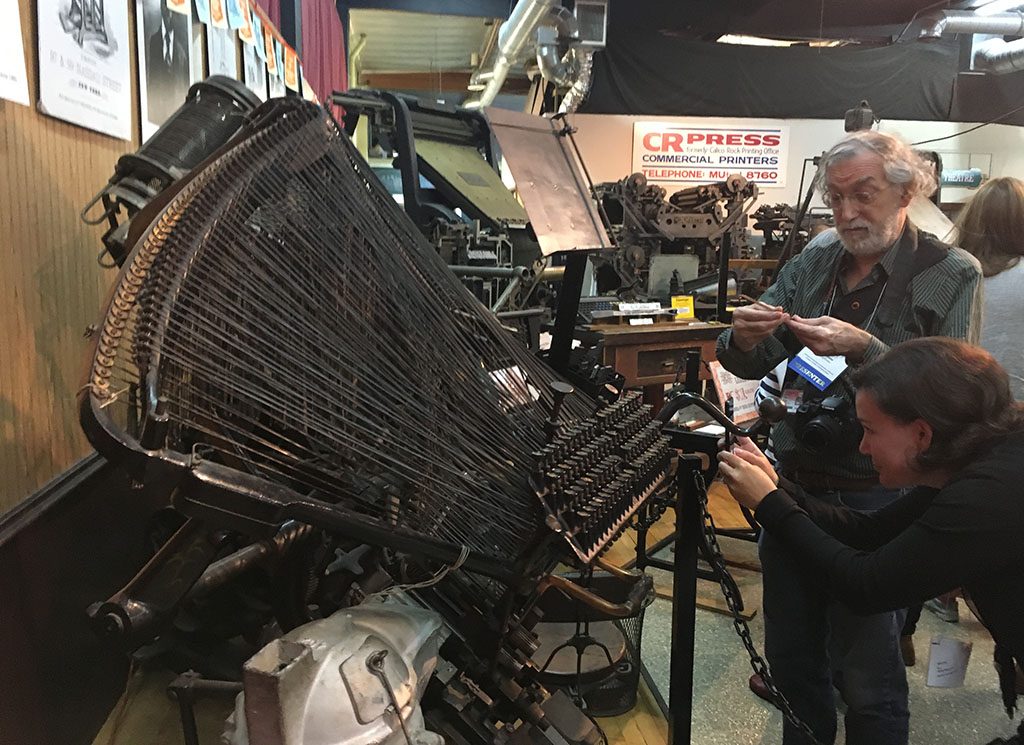 During the final, hands-on portion of the tour, we were joined by Theater Manager (and Franklin impersonator) Phil Soinski. We proved ourselves to be adept apprentices of the “black art,” first by disappearing several boxes of pizza, then—guided by Barbour and Soinski—by printing with several table-top presses. These included an 1890s parlor press and a sign press once used by a Macy’s department store. We also had the opportunity to have our names cast in type using the museum’s Ludlow Typograph. 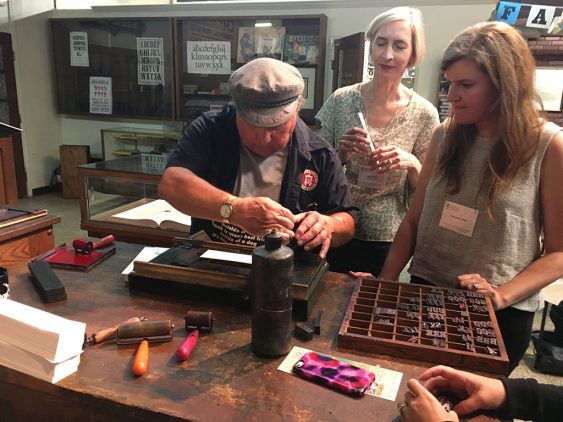 Our takeaways? Some personalized slugs, several sheets a piece of hand printing, a better understanding of the evolution of printing technology through the centuries, and, most of all, an appreciation of the International Printing Museum’s work to provide experiential education about printing history by keeping these historic machines running. 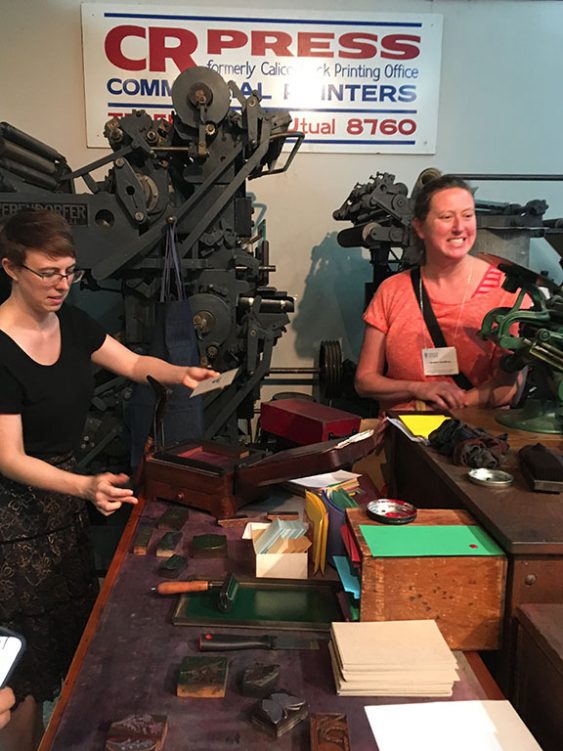 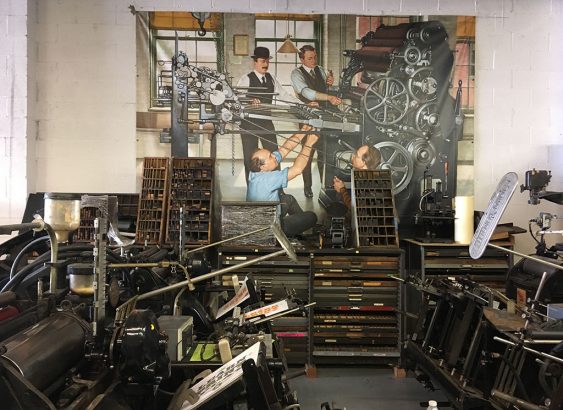 A view of the storage space opposite the exhibit area in the museum’s main building. (Jess Touchette)