In many of my conversations with my friend John De Pol, he reminisced about a man who was one of the earliest supporters of his efforts to engrave on wood. Working as a production assistant learning the printing trade at Lewis White’s shop in New York in 1950, he met John Stroble Fass during a visit to the office. Fass offered him a few of his small printed items, De Pol offered to make some wood engravings for future efforts, and an enduring friendship was begun. One has only to look at their collaborations to understand what a sympathetic relationship it was. Although I was exposed to John De Pol’s memories, I wasn’t exposed to any of Fass’ printing until the very end of De Pol’s life, when bookseller Aveve Cohen made me a gift of a Fass booklet with De Pol’s engravings, and a print made by Fass from two chestnut leaves. Armed with those two items, and a copy of the book that Mrs. Cohen put together as a tribute, I began my own search for the work of John S. Fass.

Born in 1890 and raised in Lititz, Pennsylvania, in the heart of Amish country, John Fass roamed the countryside, and fished in the Hammer Creek, so named for the water mills that powered the large hammers in the forges built on its banks. From the age of twelve until after graduating high school, he worked at the local newspaper, the Lititz Express, where he learned the basic skills that would form his career. In 1918, he went to work as a compositor in Philadelphia, and two years later landed a job at an advertising composition company in New York City. From 1923 to 1925, he honed his skills as a compositor working for William Edwin Rudge at his plant in Mount Vernon, putting Bruce Rogers’ designs into type. His personal style was strongly influenced by Rogers, and they remained friends for the rest of Rogers’ life.

Late in 1925, Fass and fellow Rudge employee Roland Wood, and Wood’s wife Elizabeth, founded the Harbor Press, specializing in fine book-work. Together they produced 114 titles for themselves and other publishers like the Limited Editions Club before Fass withdrew due to ill health. Subsequently, the plant was liquidated and the personnel merged with the Marchbanks Press. As typographer for the press, Fass’ style had matured, and upon examination the books show much of the same playful use of typography and ornament that defines Rogers’ work, and Fass’ later work at his Hellbox and Hammer Creek Presses.

As a youth, John Fass had developed woodworking skills that he continued to use throughout his life. He carved numerous seahorses after the pressmark used by the Harbor Press, and small detailed boxes as gifts. About the same time he left the Harbor Press, he fashioned a small 18″ tall version of a common press that would print from foundry type – this he dubbed the Hellbox Press. He produced a tiny specimen book in two colors on the press, inking the borrowed types and rare old ornaments with his thumb, noting in the specimen’s Aftermath, “When going to press we discovered a shortage of roller – in fact, none – so we printed this booklet without any.” Likely the rarest item in my Fass collection, it was produced in an edition of 15 copies, complete with slipcase. He also produced bookplates, and some tiny Christmas cards on the press, but it was largely used for amusement.

He continued to work for advertising typographers throughout WWII, and in 1950 he acquired a small 1905 Hughes and Kimber Albion with a platen size of about 7″ &times’ 10″. The press had been acquired by Bruce Rogers in 1919 and brought to this country by him after traveling and working in England. Fass would have been very familiar with the press, as it occupied a prominent spot in Rogers’ office at William Edwin Rudge. Illustrator and printer Valenti Angelo had purchased the press from Rogers in 1949, and sold the press to Fass a year later, as he had purchased a larger Washington press with which to print. Two years later Fass issued a notice in booklet form, The Hammer Creek Press Has Engulfed The Hell-Box Press issued with wood-engravings of both presses by John De Pol, thus bringing to an end his first entertaining private press experiment. 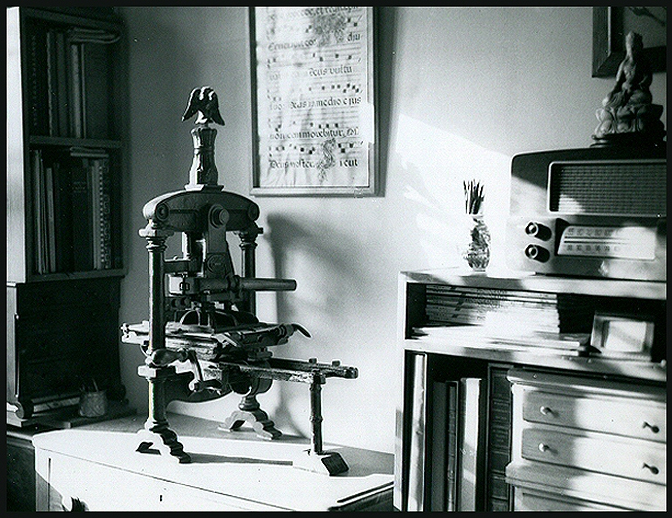 John Fass snapped this picture of his Hughes and Kimber Albion (which he had purchased from Valenti Angelo in 1950) neatly displayed with his books and prints accumulated during his 50+ year printing career. Bookseller Herman Cohen stated that never before had he seen so many items stored so neatly in such a small location.

In the twelve years that he owned the small Albion, Fass rented a small apartment in the Bronx Union YMCA. De Pol related that when he visited, one could sit on the bed (under which Fass kept his type cases), and reach out and touch the press. His printed items were made for fun and for experimentation in very small editions, and he was known for pulling copies from his jacket pocket and presenting them to friends at lunch or dinner. He was encouraged to print larger editions by his friend and bookseller Herman Cohen, who then included them in his catalogues. In those twelve years Fass printed more than sixty items, in editions ranging from 122 copies to one single copy. Many of the illustrations and pressmarks were provided by his friends A. Burton Carnes, Valenti Angelo, as well as John De Pol. Fass printed on sheets of handmade, mould-made or Japanese papers without dampening, often using several colors of ink that he would vary within the editions. He bound the books himself using western and Japanese-style bindings, and often made matching slipcases.

As a member of the Typophiles, Fass counted some of the most talented people in New York printing circles as his friends, and when Print: A Quarterly Journal of the Graphic Arts published an article in 1948 titled How to Make a Hay Prints by fellow Typophile Arthur Rushmore, he must have taken notice (my own copy was once owned by Fass’ close friend A. Burton Carnes). Fass appears to have started printing from leaves in 1958-59, with his first book Twenty-five Poems About Trees & Leaves Including Some Prints of Leaves printed in an edition of thirty copies. He devoted more and more time to his experiments with this medium, and a number of his final productions were issued as books or portfolios of leaf prints, several as a single copy. 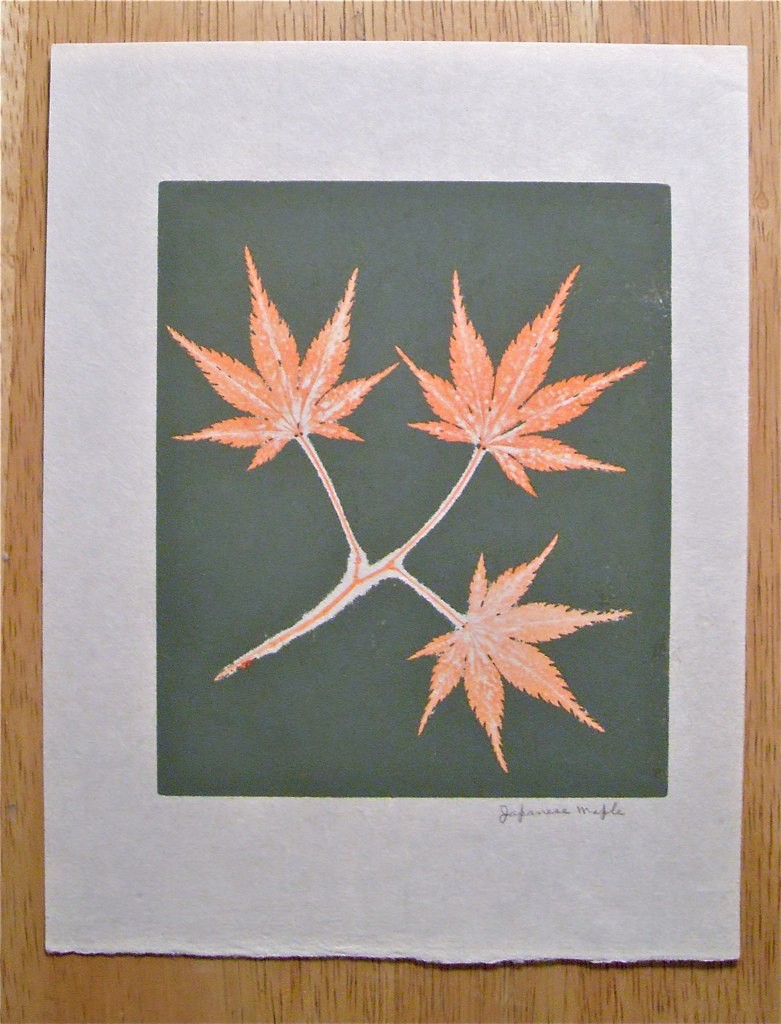 In the late 1950s John Fass started experimenting with leaf prints. His friend Arthur Rushmore had been making nature prints for over a decade previously, and historically Pennsylvanian printers had been very important in developing leaf printing on Continental currency. Whatever was his impetus from 1959 on leaf printing was an important part of his printed work, in books and portfolios of very small editions, sometimes numbering only a single copy.

Herman Cohen and others organized an exhibit of the work of the Hammer Creek Press in 1962, which then traveled to the Book Club of California in San Francisco. Later that year at age 72 Fass was forced to move from his YMCA apartment, so he sold the press back to Valenti Angelo, including his accumulated types and ornaments. Soon after, in failing health, he moved back to Lititz where he had kept a room in his family home that was then owned by his sister, dying in 1973.

The Hughes and Kimber Albion was used by Valenti Angelo throughout the remainder of his life. Many of the borders and ornaments that Fass had acquired throughout his career were sold to the Angelica Press in New York when, after the death of his wife, Angelo relocated to San Francisco. Fass’ types and a few borders were used by Angelo until his death in 1982. The press was then given to the Bancroft Library at the University of California at Berkeley, but they did not acquire the types, and their whereabouts seem to be lost to time.

Like so many other printers, Paul Ritscher was exposed to printing through a high-school journalism class. In Lincoln, NE, he worked through his 3-year apprenticeship with the Graphic Arts International Union in two years. Moving to Nashville, TN, he first worked as a typesetter, then managed Hatch Show Print. After putting Hatch back on its feet, Paul started Ritz Sho-Card Company, which closed in 2005 after 20 years of letterpress work in various locations. He taught book-arts classes at Cowell Press UC Santa Cruz until 2007, and currently prints on hand presses at his private press, the Devil’s Tail Press.

Reclaiming S.A. Jacobs: Polytype, Golden Eagle, and Typographic Modernism by Walker Rumble. “Samuel A. Jacobs was an American printer and a book designer. His work during the 1920s and 1930s placed Polytype Press and, later, Golden Eagle…”

Cardboard Collins by Walker Rumble. “The Pittsburgh compositor Alexander Collins (1870–1918) was an ordinary printshop journeyman, never prominent, and he remains obscure. Collins, however, surfaced briefly in the early twentieth…”

John Wells: Hand Press Innovator by Joan Boudreau. “My discovery of the letters patent for John Wells’s renowned lever printing press and the 200th anniversary of the innovative beginnings of the press have…”