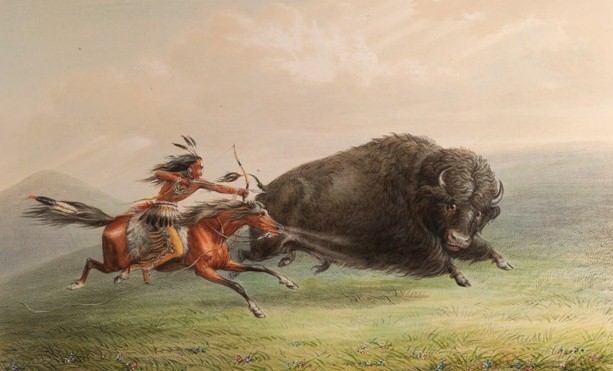 In her survey of landmarks in ethnographic color printing, Rebecca Romney demonstrated that they all went big. And rather than go home, some authors and artists went into the field to record tribes of North American that were vanishing as the result of westward expansion and the devastating Indian Removal Act under President Jackson. Presented in chronological order, a number of ambitious, mostly pre-Civil War projects were discussed with an emphasis on their production history including History of the Indian Tribes of North America by Thomas L. McKenney and James Hall (1836–1844) with 120 hand-colored lithographs after paintings by Charles Bird King and James Otto Lewis; Reise in das innere Nord-America in den jahren 1832 bis 1834 (Travels in the Interior of North America 1832 to 1834) by Prince Maximilian of Wied-Neuwied (1839–1841) with 81 aquatint engravings after paintings by Karl Bodmer; the North American Indian Portfolio by George Catlin (1844) with 25 hand-colored lithographs after paintings by the author; and The North American Indian by Edward Curtis (1907–1930) with 200 sepia photogravures by the author.

Problematic questions surrounding whether the books stand as truthful or romanticized documents of peoples, cultures, and everyday life was touched upon, but the emphasis of the talk was the ultimate success of these projects despite the inherent challenges posed by non-government, subscription financing. The books (most multi-volume and taking years to execute), had absorbing backstories with regard to their creation, patronage, printing, pricing, promotion, and public reception. We also learned that patriotism was a motivating factor for authors and illustrators who were aiming to produce color-plate works that rivaled the best from Europe.

Given the conference theme, the titles that were printed in several iterations beg to be analyzed in their own right to explore how different publisher’s approached image and color execution.

Jessica Holada is Director of Special Collections and Archives at Cal Poly, San Luis Obispo. In 2012, she curated the exhibition "Where Bohemians Gathered: Print Culture on the Arroyo Seco, 1895 to 1947" to complement a symposium co-sponsored by the APHA Southern California Chapter and Occidental College Library, and currently serves as the chapter's President. She was the chapter's Membership Chair from 2010-2015. Jessica has also made small edition books under the imprint Twopence Coloured Press.