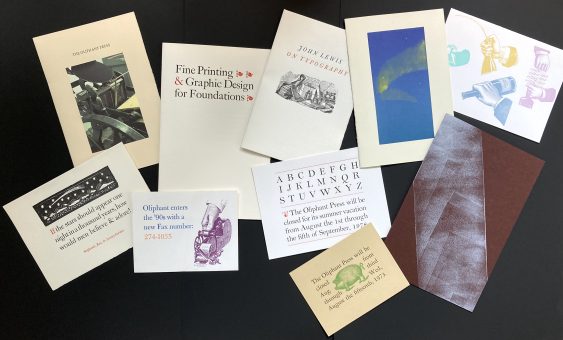 APHA member Ron Gordon, a graphic designer, teacher, and letterpress printer for more than 40 years in New York City, has been called “a keeper of the great tradition of American book design.” In college, Gordon studied with the artist and printer Leonard Baskin and later worked at Joseph Blumenthal’s Spiral Press. He collaborated with many artists during his long career—Edward Gorey, Maurice Sendak, Baskin, and others.

His customers included most of the most prominent cultural institutions in NYC: The Metropolitan Museum, the Frick Collection, the Morgan Library, and the Grolier Club, among many others. In addition to designing and printing limited edition books at his Oliphant Press, Gordon produced a vast body of ephemera for his prestigious customers as well as for his own press and private use. He has now compiled a number of packets of this ephemeral printing to give away to teachers of letterpress printing and graphic design or to collectors and librarians who are interested in this material. Please email oliphantpress@gmail.com  for further information or to express interest in receiving one of these packets.