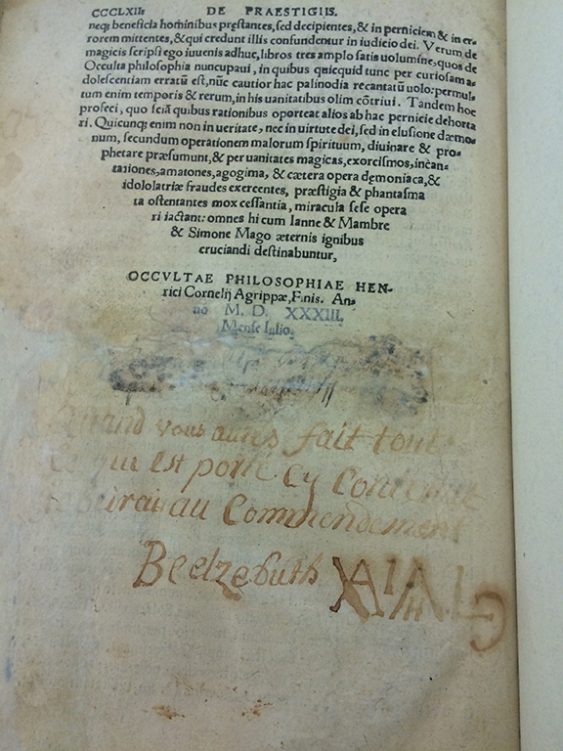 Michaela Rae Ryerson Baca, presented findings on her examination of marginalia in a copy of Agrippa’s De Occulta Philosophia Libris Tres (Occult Philosophy in Three Books), believed to have been published with all three texts combined for the first time in 1533. These texts covered the elemental world, physical and celestial objects, mathematics, and the religious and divine.

The edition of the text that she initially examined resides in the Texas A&M Cushing Memorial Library and Archives. She was especially drawn to an instance of marginalia that had a couple of distinguishing features. First, an inscription, which was barely legible and was addressed to “you,” a future reader, was signed “Beelzebub.” Additionally, smearing occurring at the site of the inscription appears to be blood. Library staff have not yet tested the paper because they are worried it will cause damage.

In her studyBaca viewed three additional copies of Agrippa’s text (one from the University of Illinois at Champaign-Urbana, one from the Bavarian State Library, and a digitized edition from the Bodleian). She found differences in the decorated letters used, differences in the diagrams of man that are included, pagination issues, printers errors, and some additional marginalia, but nothing as mysterious as the inscription set within the smeared red pigment found in the Cushing library edition. She plans on examining many other editions of this text as she continues to pursue her research. 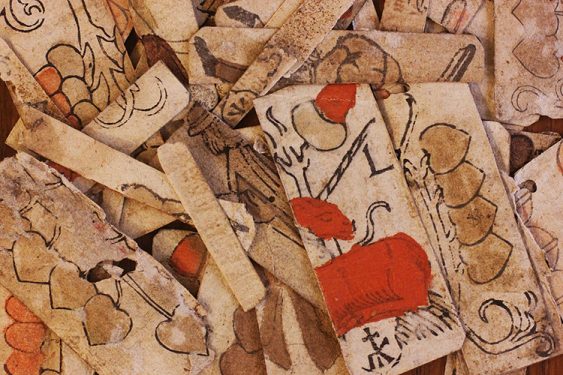 Todd Samuelson spoke about the significance of breaking up books as objects and reusing and repurposing the material parts of those books or other textual/printed matter to create new works. Even as the older, perhaps original work is “erased,” something of the earlier work nevertheless remains and serves as evidence of the history of the materials brought together to create another book object.

He spoke of the context of this repurposing, which has happened continually throughout the history of the book. One such example occurred during the dissolution of the monasteries in England, which caused many manuscripts to be broken up and their component parts reused to create something new. His enquiry lies with the relevance of this repurposing and the narrative of each work that ensues if you consider how each work came to be. He believes the evidence of repurposed materials helps us to explore the history of the book by revealing connections and proximities between people and materials, the circulation of books, and the book trade.

The most typical of these kinds of reuse are found in palimpsests, where an earlier “ghostly” writing can be seen underneath the heavier type or printing of the current work. Today, with imaging technology, the older writing can often be revealed in its entirety. He also offered less common examples of book matter being repurposed—in a sixteenth-century edition of Galen published in Leipzig, Germany, odd, colorful strips were found in the binding, used ostensibly to build up the sides of the pasteboard that the sheepskin was stretched on. When placed side by side, the strips were found to be pieces of playing cards from an earlier time period.

Samuelson continues to study these repurposed features of books and manuscripts  and is starting some joint projects with colleagues. 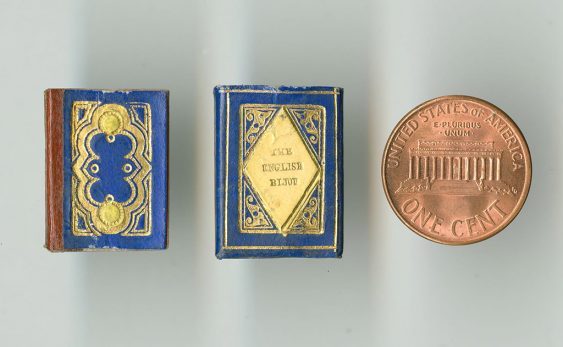 Laura Forsberg spoke about the magic inherent in miniature books, tiny works that measure less than 3 inches in height. In her research, she aims to reveal the ways in which these tiny texts pushed against traditional publishing.

She reviewed the main physical characteristics of miniature books: the very small size, the small type (miniature books first emerged in the fifteenth-century, and at the height of their popularity in the nineteenth-century, they displayed a minuscule 2 pt. type), the thin pages, and the often ornate bindings and the possibility of accessories. Because of these physical properties, the reader often experiences difficulties when trying to hold open and read a book of this size.

Additionally, these books were portable and could be kept in a pocket or underneath clothing, which gave them a veil of secrecy that other books could not match. And despite their small size, they often comprised a wealth of material: a travel book that opened up to a full sized map, other types of gazetteers, lantern books with a hidden image brought to life when held up to a light. These books invited the reader to participate in the magic and spectacle of knowledge, which became transfixing and precious in a condensed format.

She described what is perhaps the smallest miniature book in the world made from movable type—Galileo a Madama Cristina di Lorena (1615), in which Galileo argues for religion and science to be reconciled. It measures about half the size of a postage stamp.

Forsberg noted that libraries such as the Huntington have huge troves of these artifacts that have not received recent critical attention, which means she has the happy circumstance of having many more miniature books to examine for her research.

Susie Seefelt Lesieutre is a  librarian assistant with the Wisconsin Historical Society and works with their extensive print serials collection. She recently earned a master’s degree in Library and Information Studies from the University of Wisconsin-Madison, concentrating on academic and digital libraries and the history of print culture. She lives in Madison with her husband and daughter.